Minaj is up for artist of the year against Luke Bryan, Ariana Grande, One Direction and Taylor Swift 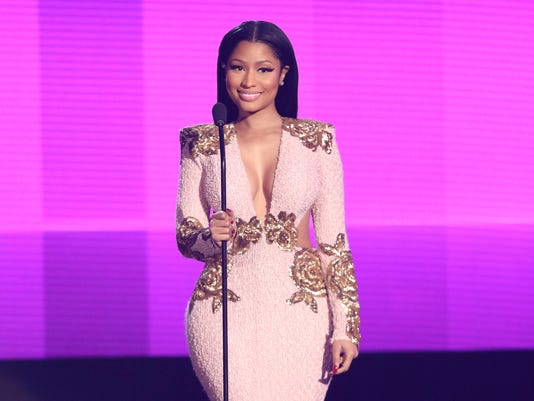 Nicki Minaj encouraged her feverish fans to “find their voice” when accepting an honor at the fan-voted American Music Awards on Sunday night.

The rapper won favorite album — rap/hip-hop for “The Pinkprint,” beating out Drake and J. Cole.

“I want to just thank you, the fans, for allowing me to change and have a different voice every time I come back out (with a new album),” Minaj said at the Microsoft Theater in Los Angeles. “And please find your voice and find your purpose before it’s too late. Love you.”

Minaj is up for the night’s top award, artist of the year, against Luke Bryan, Ariana Grande, One Direction and Taylor Swift, who didn’t attend the awards show because she’s out of the country shooting a music video.

“Wow. To say that we have won this award for three years on a bounce is a pretty incredible thing to be able to say. It’s as simple as this: we won’t be able to do this without our fans,” Niall Horan said.

The performance that got the most attention, though, was Meghan Trainor and Charlie Puth’s. The singers made out onstage after singing their song, “Marvin Gaye,” which features the lyrics: “Let’s Marvin Gaye and get it on.”

Bryan beat out Jason Aldean and Sam Hunt, who won new artist of the year.

Host Jennifer Lopez kicked off the AMAs in a dance routine that highlighted some of the year’s biggest hits like “Where Are U Now,” “Anaconda,” ‘’Uptown Funk!” and “Hotline Bling.” She also impressively sang in almost a cappella form.

The night will feature more A-list performances: Coldplay, the Weeknd, Macklemore & Ryan Lewis and Bryan will hit the stage.

Swift is the top nominee with six, thanks to her top-selling album “1989” and hits like “Bad Blood” and “Blank Space.” Her nominations include song and collaboration of the year for “Bad Blood” with Kendrick Lamar, favorite female artist — pop/rock, favorite album — pop/rock for “1989” and favorite artist — adult contemporary.

Behind Swift with five nominations are Sheeran and the Weeknd, who had a breakout year with the No. 1 hits “The Hills” and “Can’t Feel My Face.” The latter is competing for song of the year against Sheeran’s “Thinking Out Loud,” Swift’s “Bad Blood,” ‘’See You Again” by Wiz Khalifa and Charlie Puth, and Mark Ronson and Bruno Mars’ “Uptown Funk!”

Prince, who earned a rousing applause, presented the first award of the night to the Weeknd for favorite album — soul/R&B for “Beauty Behind the Madness.”

“Make some noise for Prince, ladies and gentlemen,” the singer said.

The night will take an emotional turn when Celine Dion honors the victims of the recent attacks in Paris when she sings Edith Piaf’s “Hymne à L’Amour” in French. And a clip from the new “Star Wars” film will premiere later in the show.

— Duo or group, pop-rock: One Direction

— Album, soul/R&B: “Beauty Behind the Madness,” The Weeknd