Taylor Swift accepts the award for album of the year for "1989" at the 58th annual Grammy Awards on Monday in Los Angeles. Matt Sayles / Invision / AP
Fullscreen

An image of Michael Jackson appears on screen as Miguel performs "She's Out of My Life" at the 58th annual Grammy Awards. Matt Sayles / Invision / AP
Fullscreen

Taylor Swift reacts to the win of Song of the Year by Ed Sheeran and Amy Wadge. Robert Gauthier, TNS
Fullscreen

Composer Maria Schneider poses with her trophies for Best Arrangement, Instruments and Vocals for "Sue (Or In A Season Of Crime)" and Best Large Jazz Ensemble Album "The Thompson Fields" in the press room during the 58th Annual Grammy Awards Monday in Los Angeles. Mark Ralston, Getty Images
Fullscreen

Skrillex, left, and Diplo accept the award for Best Dance Recording for "Where Are U Now" at the 58th annual Grammy Awards on Monday in Los Angeles. Matt Sayles / Invision / AP
Fullscreen

Ben Bram holds the trophy for Best Arrangement, Instrumental, or A Capella for "The Dance of the Sugar Plum Fairy" in the press room during the Grammy Awards. MARK RALSTON, AFP/Getty Images
Fullscreen 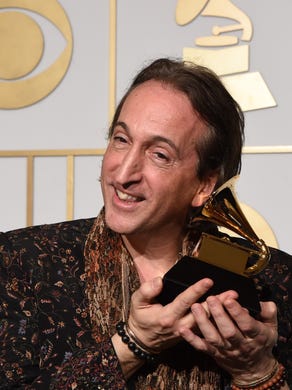 Kendrick Lamar accepts the award for best rap album for “To Pimp A Butterfly” at the 58th annual Grammy Awards on Monday, Feb. 15, 2016, in Los Angeles.(Photo: Matt Sayles / AP)

Monday’s Grammys were “Alright” for Kendrick Lamar and Taylor Swift, whose “1989” won her a second album of the year for “1989,” her multi-hit switch from country to pop.

Compton rapper Lamar was the night’s top winner, taking home five awards but losing in the major categories. Swift’s “1989” topped his “To Pimp a Butterfly” in the Album of the Year field, and Ed Sheeran’s “Thinking Out Loud” beat out his “Alright” in the Song of the Year race.

Swift’s Album of the Year victory made her the first female performer in Grammy history to win that category twice — her album “Fearless” won in 2010 — and allowed her to make a strong statement just days after Kanye West made worldwide headlines for trying to take credit for her fame in his song “Famous.”

“I want to say to all the young women out there, there are going to be people along the way who try to undercut your success or take credit for your accomplishments or your fame,” she said, a determination in her delivery that was far from the “aw shucks, me?” Taylor Swift of yore. “But if you just focus on the work and you don’t let those people sidetrack you, someday when you get where you’re going, you’ll look around and you’ll know that it was you and the people that love you that put you there, and that will be the greatest feeling in the world.”

Lamar’s five awards were for Best Rap Album (for “To Pimp a Butterfly”), Best Rap Performance, Best Rap Song (both for “Alright”) and Best Rap/ Sung Collaboration (“These Walls”). He also was honored for Best Music Video for “Bad Blood,” his collaboration with Taylor Swift.

He also delivered a scorching performance of “The Blacker the Berry,” “Alright” and a new song that closed with a picture of Africa with the word “Compton” scrolled across the center.

“We will live forever, believe that!” the MC said.

Ed Sheeran won for “Thinking Out Loud,” which also won for Best Pop Solo Performance earlier in the night. Sheeran was handed his trophy by Stevie Wonder. “If you would have told my 11-year-old (self), 5-year-old, any age that I would have received an award from Stevie Wonder, I would have been shocked,” Sheeran said.

Best New Artist went to a tearful Meghan Trainor, the “All About that Bass” singer who was up for several awards at last year’s ceremony, but qualified for the New Artist category because her album was released during the Grammy’s eligibility period.

Taylor Swift opened the show with a performance of her single “Out of the Woods,” strutting down the Grammy stage and hitting poses like a runway model. Other performances stressed duets: Sam Hunt and Carrie Underwood, Andra Day and Ellie Goulding, and a Lionel Richie tribute featuring John Legend, Demi Lovato, Tyrese, Luke Bryan, Meghan Trainor and Richie himself. All were rather flat.

LL Cool J, returning for his fifth straight year as host, continued to distance himself from his once charismatic personality, spouting social media catchphrases like a digital brand strategist. “I think Kendrick Lamar will be a top Trending Topic minutes into his performance,” he said during the preshow, later asking fans to “hit me on my Instagram” to tell them what performances they were liking. His attempts to interject life into the show were similarly dull. “I love a ‘Lip Sync Battle’ just like the next guy. OK, OK, maybe a little more than the next guy,” the host of Spike’s “Lip Sync Battle” said. “But these people here, they sing for real. This is the Grammys!” Wow, LL, please tell us more.

Stevie Wonder was able to move the needle with a tribute to Earth, Wind and Fire’s Maurice White, doing a cool, upbeat version of “That’s the Way of the World” alongside vocal group Pentatonix. Glenn Frey, the late Detroit area native, also received a warm tribute when the Eagles and Jackson Browne turned in a performance of “Take It Easy.”