Sabrina Nelson of Detroit, center, dances with other fans to the music of Prince at the Majestic Café in Detroit to honor the legendary artist who died Thursday at age 57.(Photo: Gary Malerba / Special To The Detroit News)Buy Photo

When Lauren Hood heard the tragic news of the Purple One’s passing Thursday afternoon, she had to do something to channel her sadness.

Hood called her friends who manage the Majestic Café and asked if they could open it up so the community could come together to grieve and celebrate the life of Prince.

“We were sad and needed a place to go with other people who felt our pain,” she says, while dancing on the floor to Prince hits blasting out of the stereos. “They asked when, and I said, ‘Right now!’ ”

Hood, an urban planning professional and Detroit resident, spread the word on Facebook and sent text messages to a few friends. By 6 p.m., close to 100 musicians, artists, city workers and real estate developers were packed in the Majestic, singing and dancing along to “Let’s Go Crazy,” “When Doves Cry,” “Purple Rain” and all of Prince’s legendary singles.

Jewelry artist Stephanie Whitfield said Prince’s death struck a deep chord. The two were the same age — 57 — and she’s been following him since age 14.

“This is like a Michael-type of day,” she says, referring to Michael Jackson’s shocking death in 2009.

Whitfield recalled attending a Prince concert in New Orleans ages ago. “It was one of the best concerts,” she said. “I left the stadium at 4 a.m., and he was still performing.”

Everyone in the room had their own Prince story to tell.

Prince’s purple reign over too soon

Public relations specialist Greg Bowens, 51, of Grosse Pointe was a junior at Cass Tech in 1982 when he was working his first job at the ticket counter of the Palms (now the Fillmore). He said he was upset because all his friends were attending a Prince concert at then-Cobo Hall, and he had to sell tickets.

“Nobody was outside. It was dead quiet. Then this yellow car pulls up. It was packed with people. The girl who was working in the booth with me started screaming like she lost her mind,” Bowens says, smiling at the memory. “Around the corner comes this guy that looks like Prince. He’s like, ‘How do you get to Cobo Hall?’ ”

Bowen said his manager didn’t believe him when he called to say Prince stopped by. “Only in Detroit,” he said.

Ronald Little Jr., a 48-year-old middle school music teacher in Hamtramck, started listening to Prince’s music at age 12. As a piano player, he said Prince was “a great influence on his life.” He particularly remembered attending a concert with his mother and father in 1981. Both didn’t say anything the entire time, he recalled. They sat there with their mouths open, taking it all in. “I had one of the best days ever just sitting there,” he said.

Travis Wright, host of Culture City on WDET-FM, put Prince in perspective of other recent musicians the world lost.

“David Bowie gave a lot of people the freedom to embrace their weirdness. The thing is, I think Prince did the same thing for my generation,” Wright said. “He made it cool to be weird.”

He said the diverse people on the dance floor, ranging in age from early 20s to early 60s, are a “mélange of generations of highly engaged Detroiters.”

“They represent Detroit and symbolize what Prince is all about,” he said.

Prince, one of the most influential but elusive figures in music, performs on stage at the Stade de France in Saint-Denis, outside Paris, on June 30, 2011. He has died at his home in suburban Minneapolis at age 57. Bertrand Guay, AFP/Getty Images
Fullscreen

Kimberly Leitz, left, and Sunshine Bonner, both of Detroit, dance to the music of Prince at the Majestic Cafe in Detroit in honor of the legendary artist, who died on Thursday at the age of 57. Gary Malerba, Special to The Detroit News
Fullscreen

Sierra Donaven, of Grosse Pointe Farms, dances to the music of Prince at the Majestic Cafe in Detroit to honor the legendary artist who died Thursday. Gary Malerba, Special to The Detroit News
Fullscreen

Sabrina Nelson, of Detroit, dances with other fans to the music of Prince at the Majestic Cafe in Detroit. Gary Malerba, Special To The Detroit News
Fullscreen

Fans dance to the music of Prince at the Majestic Cafe in Detroit. The artist died Thursday at the age of 57. Gary Malerba, Special to The Detroit News
Fullscreen

Prince performs onstage during the "HitnRun" tour at The Fox Theatre in Detroit on April 9, 2015. Chelsea Lauren, Getty Images for NPG Records
Fullscreen 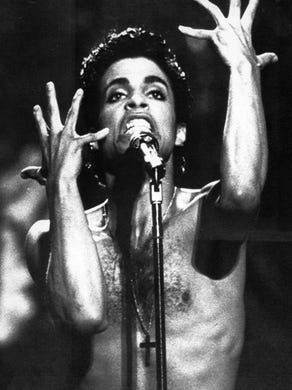 Prince performs in concert at Riverfront Coliseum on Jan. 22, 1985, during his Purple Rain Tour in Cincinnati, Ohio. Prince's publicist has confirmed that Prince died at his his home in Minnesota, Thursday, April 21, 2016. He was 57. ROB BURNS, AP
Fullscreen

Singer Prince arrives with his then-wife Manuela Testolini for the 77th Academy Awards Sunday, Feb. 27, 2005, in Los Angeles. Prince was a presenter during the Oscars telecast. KEVORK DJANSEZIAN, AP
Fullscreen

Longtime fan Luther Washington shows off his Prince tattoo while waiting for the doors to open for Prince's Baltimore concert Sunday, May 10, 2015. Jerry Jackson, AP
Fullscreen

Prince is seen in 2005 at a media conference for the release of his video, "Te Amo Corazon" in Beverly Hills, Calif. Matthew Simmons, Getty Images
Fullscreen

Beyonce and Prince perform the opening act of the 46th Annual Grammy Awards at the Staples Center in Los Angeles on Feb. 8, 2004. Timothy A. Clary/AFP/Getty Images
Fullscreen

Prince jams with Stevie Wonder at the 2006 BET Awards at the Shrine Auditorium in Los Angeles on June 27, 2006. Frazer Harrison, Getty Images
Fullscreen

Prince performs during the "Pepsi Halftime Show" at Super Bowl XLI in 2007 between the Indianapolis Colts and the Chicago Bears, at Dolphin Stadium in Miami Gardens, Florida. Jed Jacobsohn, Getty Images
Fullscreen

Prince presents the winner for Record of the Year during the 55th Grammy Awards in Los Angeles on February 10, 2013. Prince produced the debut album of R&B singer Judith Hill and launched a personal campaign to promote it. Joe Klamar, AFP/Getty Images
Fullscreen

Prince performs onstage with 3RDEYEGIRL during his "HitnRun" tour at Bell Centre in Montreal, Canada, on May 23, 2015. Cindy Ord/Getty Images for NPG Records
Fullscreen 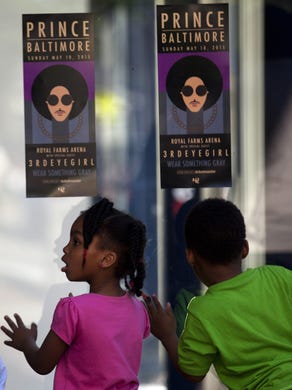 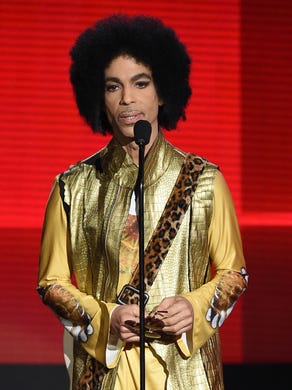 Singer Prince and his date are shown seated before the start of the Versace for H&M fashion show in New York, Tuesday, Nov. 8, 2011. Kathy Willens, ASSOCIATED PRESS
Fullscreen

In this May 19, 2013, file photo, Prince performs at the Billboard Music Awards at the MGM Grand Garden Arena, in Las Vegas. Chris Pizzello/Invision/AP
Fullscreen

Prince performs before a sold-out audience, in Houston. Prince's publicist has confirmed that Prince died at his his home in Minnesota, Thursday, April 21, 2016. He was 57. F. CARTER SMITH, AP
Fullscreen 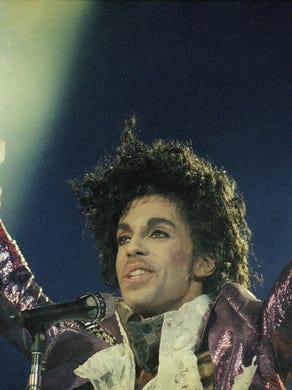 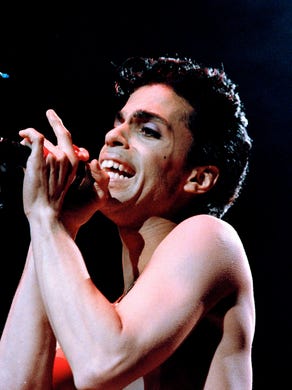 Prince performs a medley of "Take Me With U" and "Rasberry Beret" at the 4th annual VH1 Honors, April 10, 1997, in Universal City, Calif. MARK J. TERRILL, AP
Fullscreen

Boxing great Muhammad Ali, right, pats the head of the Artist Formerly Known as Prince during a meeting in Washington Tuesday, June 24, 1997 prior to a news conference where they were to announce plans for a benefit concert for The World Healing Honors, a grand benefit concert to promote international harmony and tolerance. KARIN COOPER, ASSOCIATED PRESS
Fullscreen

The Artist, formerly known as Prince, performs at the Festhalle in Frankfurt, Germany, Tuesday night, Dec. 22, 1998, during the first of three concerts in Germany as part of his "New Power Soul" tour. BERND KAMMERER, ASSOCIATED PRESS
Fullscreen 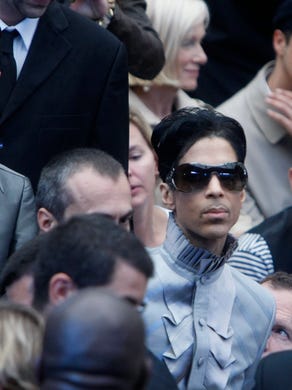