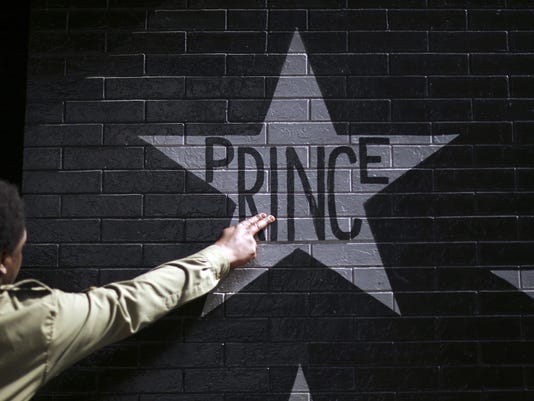 After kissing his fingers, a fan touched Prince's star on the wall of First Avenue on Thursday. Prince, widely acclaimed as one of the most inventive and influential musicians of his era with hits including "Little Red Corvette," ''Let's Go Crazy" and "When Doves Cry," was found dead at his home on Thursday, according to his publicist. He was 57.(Photo: Jeff Wheeler / AP)

Chanhassen, Minnesota – — Fans of music superstar Prince are gathering outside the downtown Minneapolis nightclub where much of the movie “Purple Rain” was filmed.

About 50 to 60 people were standing on the sidewalk outside First Avenue on Thursday afternoon to mourn the death of the musician, who died hours earlier. Prince received an Academy Award in 1985 for his music from “Purple Rain,” the movie in which he starred as a young musician.

About a dozen bouquets, some balloons, candles and a guitar were left at the club. Some people stood with their heads bowed, while others quietly chatted about what Prince’s music meant to them.

One fan, 32-year-old Amy Fox, said she came to the nightclub because it’s where Prince began his career.

On Thursday, President Barack Obama lamented the loss of a “creative icon” with the death of the rock superstar. In a statement, the president called Prince “one of the most gifted and prolific musicians of our time.”

“Michelle and I join millions of fans from around the world in mourning the sudden death of Prince. Few artists have influenced the sound and trajectory of popular music more distinctly, or touched quite so many people with their talent. As one of the most gifted and prolific musicians of our time, Prince did it all. Funk. R&B. Rock and roll. He was a virtuoso instrumentalist, a brilliant bandleader, and an electrifying performer.

The 57-year-old musician was found dead Thursday at his home in a Minneapolis suburb. Sheriff’s deputies said they found Prince unresponsive in an elevator after they were summoned to the scene for a medical call.

Olson said the death is under investigation.

Meanwhile, sales of Prince’s music have soared since news broke of the pop star’s death.

Four of his albums — “The Very Best of Prince,” ‘’Purple Rain,” ‘’The Hits / The B-Sides” and “1999” — jumped to first, second, third and eight on iTunes’ Top Albums chart by Thursday afternoon.

The singer’s music catalog, including last year’s “HITNRUN Phase One & Two,” was streaming on Tidal, another high-profile exclusive for the Jay Z-backed service. Other streaming services like Spotify and Rhapsody did not offer Prince’s songs.

A Warner Music spokesman did not immediately respond to a request for comment about the latest state of his contract with the record label.