The weeklong camp will offer two sessions this summer, thanks in part to a grant from UM 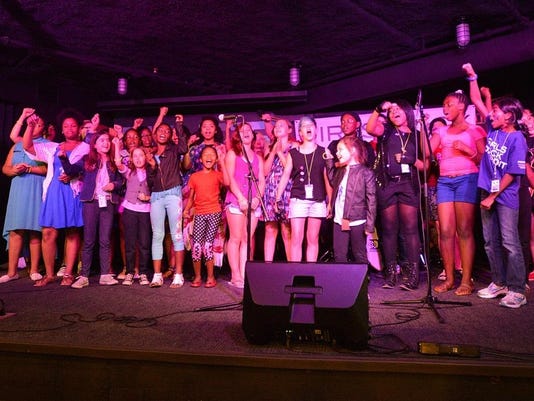 Girls Rock Detroit music camp returns for its second year this summer with more than double the space for students looking to learn the fundamentals of playing music in a rock band.

The weeklong inaugural event was such a hit last summer that this year organizers will host the camp for two weeks: July 11-16 and Aug. 8-13. The last day of each camp will feature performances open to the public from the campers at the Detroit Institute of Music Education.

In 2015 the camp housed 26, but this year around 60 campers will be accommodated over the two weeks. This is partly in thanks to the University of Michigan School of Music, Theatre and Dance awarding Girls Rock Detroit with an EXCEL prize. The inaugural prize includes a $10,000 grant and mentorship.

“The grant was unexpected on our part,” says Girls Rock Detroit co-founder Ros Hartigan. “Right now they’re helping us build a three-to-five-year plan for the organization. We’re going to use some of the money for instruments, and the rest will go toward scholarships.”

It costs each students $200 to attend the weeklong camp, but there is a sliding scale depending on the income of the student’s household, so that any child who wants to attend can be eligible.

A typical day at camp starts at 9 a.m. and includes workshops, instrument lessons and practice with a full band. Instruments are provided, but students are also welcome to bring their own. Workshops may cover anything from vocal technique to the history of women in rock ‘n’ roll.

“Rock music is very much individually-inspired music,” says Hartigan. “It’s a do-it-yourself, garage-type of art, but there’s not a lot of room for girls in the rock music scene. We wanted to provide a space to allow girls to feel empowered and to express themselves in a totally supportive environment.”

Girls and female-identifying youth can apply to attend Girls Rock Detroit at girlsrockdetroit.org or by picking up a paper application at Detroit Public Library locations. Donations can also be made at the website, and those interested in volunteering at the camp this summer will be able to apply soon.

Apply at girlsrockdetroit.org or get a paper application at Detroit Public Library locations.