The set, called ‘Chapter and Verse,’ will arrive Sept. 23, four days before his book’s Sept. 27 publication 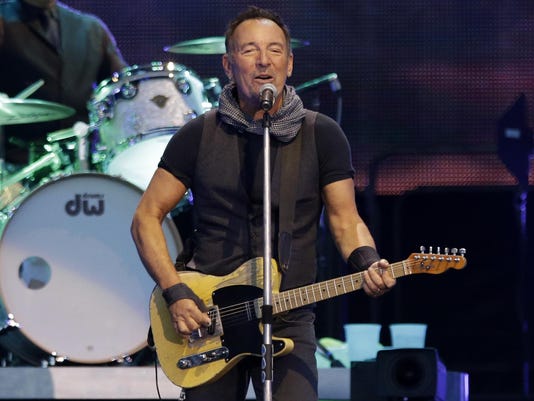 Bruce Springsteen’s “Chapter and Verse” is set to come out Sept. 23 from his longtime label, Columbia, before the book publication.(Photo: Gregorio Borgia / AP)

One of 2016’s most eagerly anticipated autobiographies is getting an “audio companion.” Bruce Springsteen’s soon-to-be-published autobiography, “Born to Run,” will arrive accompanied by an 18-track set called “Chapter and Verse,” the boss announced Thursday via his website.

Springsteen quietly started writing his book in 2009 and signed on to issue it with Simon & Schuster. In an excerpt published in February, Springsteen wrote, “Writing about yourself is a funny business. But in a project like this, the writer has made one promise, to show the reader his mind. In these pages, I’ve tried to do this.”

For “Chapter and Verse,” Springsteen will try to show the listener his ear. The music will arrive Sept. 23 through Springsteen’s longtime label, Columbia, four days before his book’s Sept. 27 publication.

While poring through the 500-page book, those readers who can simultaneously focus on lyrics and prose can use as a soundtrack both previously unreleased and classic recordings spanning five decades.

Track listing for “Chapter and Verse:”

1. Baby I: The Castiles (recorded May 2, 1966, at Mr. Music, Bricktown, N.J.; written by Bruce Springsteen and George Theiss; previously unreleased)

2. You Can’t Judge a Book by the Cover: The Castiles (recorded Sept. 16, 1967, at the Left Foot, Freehold, N.J.; written by Willie Dixon; previously unreleased)