Press operator Alejandra Villegas removes a freshly pressed album from a book mold while testing the new vinyl pressing system at Third Man Pressing, Feb. 16, 2017. The newly built plant, in the back of Third Man Records in Detroit, is expected to be able to produce 5,000 albums in an eight-hour-shift. David Guralnick, The Detroit News
Fullscreen

A puck of pink vinyl waits to be pressed into an album. A combination of hot steam and cold water is used to melt the vinyl and firm it up again. David Guralnick, The Detroit News
Fullscreen 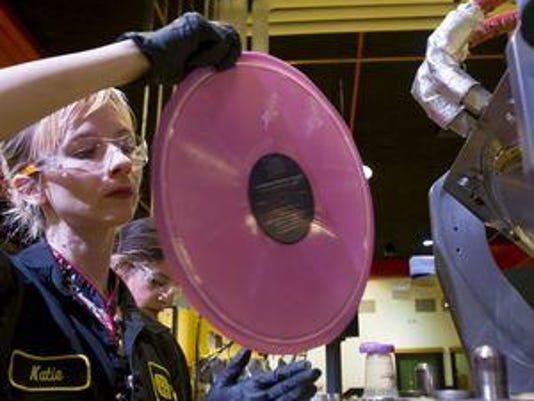 The floor is a blinding yellow, like a cartoon sunbeam. The lighting is as bright as a Hollywood set. A huge mural by Detroit artist Robert Sestok adorns the back wall, and the MC5’s “Kick Out the Jams” blasts out of a set of stereo speakers overhead.

“This isn’t how you’re supposed to do a pressing plant,” says Ben Blackwell, a co-founder of Jack White’s Third Man Records, as he stands near the entrance of Third Man’s new pressing plant in the Cass Corridor earlier this week. But anything less just wouldn’t be Jack White’s style, he says. “He wants to make something beautiful.”

With Third Man Pressing, he’s succeeded. The facility, which celebrates its opening with a splashy VIP party Friday and will be unveiled to the public during a grand opening celebration Saturday, is the latest step in White’s transformation into the Willy Wonka of the record business. Consider Third Man Pressing his own personal chocolate factory, but instead of candy bars, he’s pumping out vinyl records.

It didn’t come cheap. The facility, housed in a 10,000-square-foot warehouse in the back of Third Man’s Cass Corridor store (which opened to the public November 2015), came with a hefty seven-figure price tag, Blackwell says. It’s the sheer cost of the machines and their scarcity that has precluded more people from getting into the record pressing business; the new plant is one of about 20 in the U.S. and only a few dozen worldwide. “If it was easy,” says Blackwell, “everyone would be doing this.”

Demand for vinyl has skyrocketed in recent years as record sales have boomed, a defiance of logic as the music business has trended toward digital delivery. Sales of vinyl have exploded from 900,000 units in 2006 to 13.1 million in 2016, according to Nielsen data — driven by fans who want a physical copy of their music — and vinyl pressing plants have struggled to keep up with the growing demand. Third Man is looking to help satisfy that need, not compete with existing plants, including Detroit’s Archer Record Pressing.

“Our output is meant to augment what Archer is doing,” says Blackwell, who is clad in Third Man’s signature black-and-yellow attire. “We’re not competing. Our view is another pressing plant doesn’t create competition, it alleviates backlog.”

Third Man Pressing houses eight brand new presses that can pump out a total of about 5,000 records per eight-hour shift, or a record roughly every 45 seconds. Eventually the plan is for the plant to be up and running around the clock, 24 hours a day, and to employ about 50 people making $15 an hour with benefits. (That number would eclipse Third Man’s Nashville headquarters, which staffs a crew of about 30 people.)

The presses came from Germany’s Newbilt Machinery and arrived late last year; the company’s website says presses cost about $220,000 each. It’s not as easy as just plugging them in and turning them on; crews worked for more than a year to transform the warehouse space into a manufacturing center, erecting a water tower, adding hydraulics systems, steamers and chillers and running everything through the proper permitting processes with the city of Detroit.

Craig was well-versed in White’s vinyl stunts — in 2014, White played at Third Man in Nashville and was selling pressed copies of the performance within hours — and wanted to be involved from the beginning of the new pressing plant. “I knew it would be incredible,” Craig says. While shipping costs have forced the techno innovator to transition away from vinyl in recent years, the new facility “opens up the possibility to do something cool with vinyl again.”

The record pressing process will be on full display to Third Man customers through windows at the back of the store. (Guided tours are being offered on Saturday but quickly sold out; Blackwell says more tours may be offered in the future.)

Inside the plant, workers scoop tiny pellets resembling gravel (or Nerds candy, depending on your sweet tooth) out of large black barrels, a bit of showbiz razzmatazz courtesy of White. (The pellets arrive inside non-descript paper bags but are transferred to black barrels because, well, black barrels look cooler and are more dramatic to the eye than paper bags.)

Those pellets are poured into an extruder machine that melts them down into puck-shaped slabs, and those slabs are loaded into pressers. The pressers are activated by a two-button green-light system which cuts them into LPs from a metal master plate; stickers are placed at the center of the discs and the albums are moved to another machine where excess material is cut from its edges. (The extra material is recycled and re-melted into more pucks.)

Finished records are stacked on a cooling tray and are then sent to QC, or quality control, where they’re inspected to ensure they get the Third Man thumbs up. Not all do — a short stack of red White Stripes LPs labeled with a sticky note that said “bad” were visible on a counter top during our visit — but Blackwell says the facility is running at an approval rate of more than 90 percent so far.

Albums are shrink-wrapped in the back of the facility – like the pressers, the shrink wrap machine is painted a bold yellow – and are then packaged in handsome Third Man boxes. Each record is identified as coming from the Third Man Pressing plant. Look for the small Third Man Pressing logo on the label sticker or the tiny etching near the center of the record.

Jack White’s brother Eddie Gillis is one of the newly hired pressers, and he says the environment differs from other manufacturing jobs. “It’s work, but it’s not a sweatshop in a dirty, grimy environment. It’s very relaxing,” he says. “The plant area is colorful and exciting and clean, very uncluttered. We spin vinyl all day long while we’re working, which goes hand-in-hand with what we’re doing. We’re making records in back and selling them out front, and I don’t think there’s any other place that can claim to do that the way we’re doing that.”

It’s been two years since plans for the pressing plant started coming together, and Saturday’s opening is just the beginning of seeing them through. For now, Third Man Pressing is focusing on Third Man product but will soon be pressing albums from labels big and small, major and independent.

“Jack White is the public face for vinyl,” Blackwell says. “This is us putting our money where our mouth is. This is an investment to show our dedication and our commitment to the format and the industry surrounding it.”