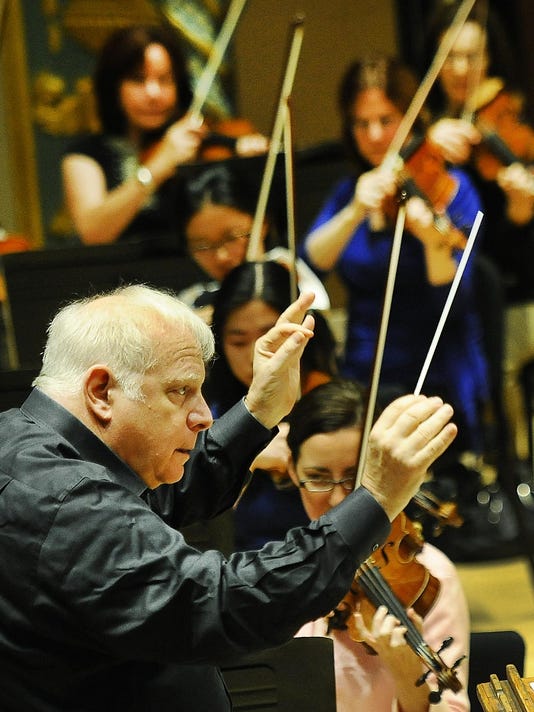 Leonard Slatkin and the Detroit Symphony Orchestra have been greeted enthusiastically while on their overseas tour.(Photo: The Detroit News)Buy Photo

Concerts are sold out, and audiences are hugely enthusiastic.

It’s been a very good two weeks for the Detroit Symphony Orchestra, in Japan and China on its first international tour in 16 years.

“The Asia tour so far has been just amazing!” wrote Assistant Principal Bassoon Michael Ke Ma on Wednesday. “We are having great time! Both for the culture and the amazing food in both countries.”

Added his colleague Kenneth Thompkins, principal trombone, “The audiences in Asia have been very enthusiastic.”

Music Director Leonard Slatkin confirmed that judgment, noting that at virtually every concert, he’s had to drag his orchestra offstage after the second encore “for fear of going into overtime.”

Indeed, the Wuhan Morning Post reported that at the Qintai Concert Hall on Sunday, “The audience applauded for more than 10 minutes” after the conclusion of the theme from a much-beloved Chinese TV show, “The Dream of the Red Chamber.”

The Changjiang Daily, which called the DSO “among the oldest and more renowned orchestras in America,” agreed, praising the orchestra’s “moving performance” of the celebrated score.

There are just two performances left in the DSO’s 11-concert Asia tour — Thursday’s in Chongqing, and the finale Saturday evening at the Shanghai Oriental Art Center.

The orchestra has presented a slightly different repertoire for each country. Japanese audiences, for example, got Gershwin’s “Rhapsody in Blue,” and the response, according to Slatkin, was “huge.”

At the last Japanese performance — in Fukui, some 200 miles to the west of Tokyo — audiences were so exuberant that Slatkin and solo pianist Makoto Ozone indulged in an extemporaneous duet.

“(Makoto) and I decided to do a four-hand riff on the Gershwin Second Prelude as an encore,” Slatkin wrote. “All made up on the spot. It seemed to knock the audience out,” he added, “as well as surprising the orchestra.”

Writing from a train speeding from Wuhan to Changsha, China, DSO President and CEO Anne Parson noted how beautiful the concert halls have been, “particularly in Wuhan. The architecture,” she said, “is very impressive.”

Equally impressive and pleasing, she added, has been the person-to-person contact that these tours hope to promote.

On Monday, the orchestra collaborated with the U.S. Consulate in Wuhan for a Pure Michigan presentation in a restored engine factory that’s been turned into an arts space and incubator.

“I think we accomplished our goal to promote tourism to Michigan,” she wrote. “Detroit’s story holds great fascination for all we meet.”