The 18-time Grammy winner has not performed since 2017, canceling appearances due to doctor's orders

Aretha Franklin, wearing the hat that became an internet sensation, performs at the swearing-in ceremony of President Barack Obama at the U.S. Capitol in Washington, Jan. 20, 2009. The pride of Detroit and the Queen of Soul, her amazing voice entertained the world for decades. Ron Edmonds, AP
Fullscreen

Aretha Franklin was the first female member of the Rock and Roll Hall of Fame in 1987. She was the winner of 18 Grammy Awards, including a Grammy Lifetime Achievement nod, and was anointed the No. 1 top singer by Rolling Stone in its list of “100 Best Singers of All Time” in 2008. Detroit News archives
Fullscreen 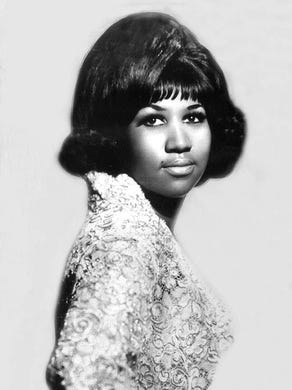 Aretha Franklin released her first album, “Songs of Faith,” in 1956. She would record more than 90 more during her long career, and earn the title The Queen of Soul. Detroit News archives
Fullscreen

Aretha Franklin's pop music recording career began when she signed a record deal in 1961 with CBS/Columbia, but her career further expanded when she signed with Atlantic Records in 1967. By the end of the 1960s Franklin was at her peak as a vocalist. Detroit News archives
Fullscreen

Her hits in 1967 included “Respect,” “Natural Woman,” “I Never Loved a Man,” “Do Right Woman,” and “Baby I Love You.” Michael Ochs Archives / Getty Images
Fullscreen 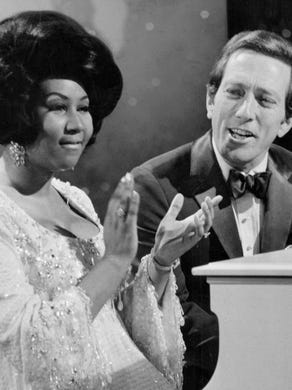 Franklin holds her Grammy March 15, 1972, after she took top honors for the fifth straight year. The award was for her rendition of "Bridge over Troubled Water." United Press International
Fullscreen

Aretha Franklin relaxes with a cigarette circa 1984. The Detroit News archives
Fullscreen

Ron Wood of the Rolling Stones and Aretha Franklin enjoy each other's company in 1986. The Detroit News archives
Fullscreen

Singer James Brown joins Aretha Franklin for a performance at the Taboo night club in Detroit, Jan. 11, 1987, for a show which was taped for airing on HBO. Joe Kennedy, Associated Press
Fullscreen

Motown legend Aretha Franklin sings the national anthem at the beginning of WrestleMania III, March 29, 1987. Traffic was so bad getting to the Silverdome, she arrived just on time, with no time for a sound check. David Coates, The Detroit News
Fullscreen 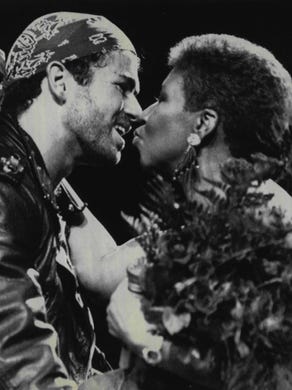 Aretha Franklin joins George Michael during his Faith World Tour Stop at The Palace in Auburn Hills in 1988. The duo sang their Grammy winning hit, "I Knew you were waiting (for me)" -- their first performance together in concert. AP
Fullscreen

Aretha Franklin sings the national anthem as the Detroit Pistons take on the Los Angeles Lakers in Game 5 of NBA Finals on June 15, 2004. Robin Buckson, The Detroit News
Fullscreen

President George W. Bush presented her with a medal at the Freedom Awards Ceremony at the White House. on November 9, 2005. Douglas A. Sonders, Getty Images
Fullscreen

Aretha Franklin performs at the “Let Freedom Ring Celebration" for the inauguration of President Barack Obama, at The John F. Kennedy Center for the Performing Arts in Washington, D.C. on January 19, 2009. Daniel Mears, The Detroit News
Fullscreen

The Queen of Soul kisses Motown founder Berry Gordy after her performance at a Motown 50th anniversary gala at the Renaissance Center in Detroit on November 21, 2009. Brandy Baker , The Detroit News
Fullscreen

Aretha Franklin gives a thumbs up after receiving an honorary Doctor of Arts degree at Harvard University in 2014. Montez Miller / Special to The Detroit News
Fullscreen

Aretha brought down the house at the Kennedy Center Honors in 2015, moving President Barack Obama and others to tears with a powerful "(You Make Me Feel Like) A Natural Woman." Molly Riley / Getty Images
Fullscreen

In June 2017, a street near Comerica Park was renamed Aretha Franklin Way in her honor, at the corner of Madison and Brush streets. David Guralnick, The Detroit News
Fullscreen

At the street-naming ceremony, Franklin reflected on her early years performing in Detroit clubs. “Detroit has been with me ever since,” she said. “They were with me when no one else knew who I was and I’ve been with them every step of the way.” Rachel Woolf, Special to The Detroit News
Fullscreen

In this April 19, 2017 photo, Aretha Franklin performs at the world premiere of "Clive Davis: The Soundtrack of Our Lives" at Radio City Music Hall, during the 2017 Tribeca Film Festival in New York. Charles Sykes, Charles Sykes/Invision/AP
Fullscreen 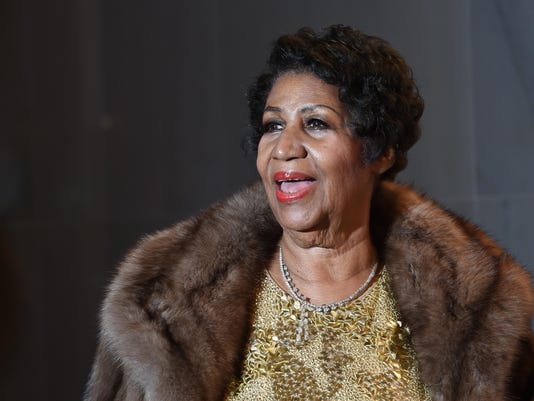 Aretha Franklin brought down the house at the Kennedy Center Honors in 2015, moving President Barack Obama and others to tears with a powerful rendition of "(You Make Me Feel Like) A Natural Woman."(Photo: Molly Riley / Getty Images)

Well wishes and prayers continue to flood social media Monday as reports of the grave condition of Aretha Franklin make headlines around the world.

Nationally syndicated radio host Tom Joyner, a close friend of Franklin's, announced Monday morning the 18-time Grammy winner has been in hospice care for a week. Two sources close to the singer independently confirmed to The Detroit News she is at home.

The website Showbiz411.com on Sunday reported the singer was in grave condition in Detroit, and that her family was asking the public for prayers and privacy.

On Monday, fans posted music videos of their favorite Franklin tunes on social media while wishing her well and offering prayers to the prolific singer, songwriter and musician who, despite her fame, remained a Metro Detroiter.

At New Bethel Baptist Church, where Franklin began singing as a child and her father was the pastor, fans of the singer sometimes wandered through Monday.

Calley Prezzano of Oakland, Calif., and Russ Harold, of Brooklyn, N.Y., friends who were in town for the Jay-Z and Beyonce concert Monday, stopped by the church after learning about the singer;s illness on Twitter.

The empty church looked much like it does most weeks, with a piano and drum set near the pulpit.

The real goods were in a back room, called the History Room, which has photos of Franklin and her father, the Rev. C.L. Franklin. Photos showed  various dignitaries, who have visiting the church, including former mayor Coleman Young, former president Barack Obama and Martin Luther King.

On Twitter, celebrities such as singer Mariah Carey posted messages such as  "Praying for the Queen of Soul."

The Rev. Al Sharpton tweeted a picture of himself with Franklin along with the message: "Pray for the Queen, Aretha Franklin, a true warrior and my dear friend."

Locally, the Rev. Wendell Anthony, president of the Detroit Branch NAACP, said for those who believe in prayer, Franklin's health struggle isn't over until God says it's over.

"(Aretha) is down, but she is not out," Anthony said. "She requires and needs our prayers, our best thoughts and our best wishes...

"The bible says that the prayer of the righteous can availeth much. So right now we encourage everyone that loves Aretha to say a little prayer for her."

Reverend Wendell Anthony and Detroit Mayor Mike Duggan offer thoughts and prayers for the ailing singer during an event at the Dr. Ossian Sweet house. The Detroit News

Mayor Mike Duggan recalled her frail condition when giving her the key to the city during the inaugural Detroit Music Weekend in June 2017. "She is so much a part of this city, and our thoughts and prayers are with her and the family today,” he said.

Wayne County Circuit Court Judge Craig Strong, a longtime friend of Franklin's, said Monday "we are all praying for her."

Strong became friends with Franklin after meeting her father, the late Rev. C.L. Franklin, pastor of New Bethel Baptist Church on the city's west side, when he was campaigning for the bench in the late 1970s.

"I just admired the man so much," Craig said. "He was just a great man."

Strong attended many of her concerts and was a guest at her invite-only parties.

"I've just been privileged that she would consider me a friend and have me at her events and parties," Strong said. "She would go out of her way to make (friends) happy."

“Anybody female that can sing is going to look at Aretha as the queen,” Brian Pastoria said. “It’s one thing to be a great singer, but one thing that she got from Sam Cook and (music producer) Jerry Wexler: singing is great, but it’s all about the song. I think she had a real ear for the song… the key to a great singer is the song.”

“She’s still here,” he added, “but when the time comes we need to pay tribute to her legacy.”

Detroit News columnist Bankole Thompson dedicated his Monday radio show "Redline" on 910 AM Superstation to Franklin as a tribute to the iconic singer. Thompson played Franklin's songs as he received calls from fans who reminisced about Franklin.

In recent months, Franklin canceled appearances due to doctor's orders at the New Orleans Jazz & Heritage Festival in April and a performance at the New Jersey Performing Arts Center on March 25, her 76th birthday.

In February 2017, Franklin announced she was retiring from touring and would be spending time with her family and working on a few projects. A few months later, Franklin performed at the Detroit Music Weekend, where she gave a moving, celebratory concert while appearing frail in health. She ended by telling the crowd, “God bless you, God keep you. Keep me in your prayers.”

Her final performance was in November at Elton John’s AIDS Foundation gala in New York City, where she closed the event singing songs such as “I Say a Little Prayer” and “Freeway of Love.” John lauded her “the greatest singer of all time."