Alabama will mark their year together with a new tour in 2019 which begins Jan. 10 in Detroit 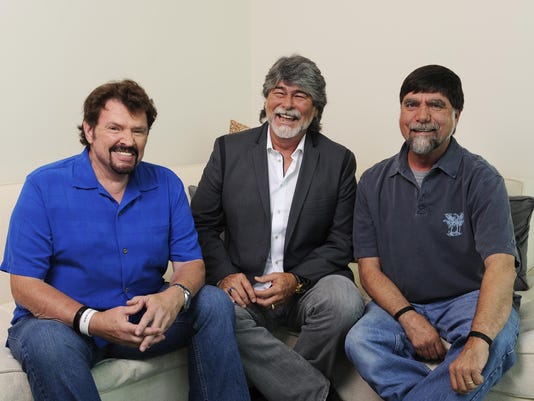 In this August 2013, file photo, Jeff Cook, from left, Randy Owen and Teddy Gentry from the American country music band Alabama pose for a portrait in Nashville, Tenn. Country band Alabama to mark 50 years together with a new tour in 2019, more than a year after founding member Cook announced that he has Parkinson’s disease. Cook will join band members Owen and Gentry on the tour as much as physically possible on the tour that begins Jan. 10 in Detroit.(Photo: Donn Jones/Invision/AP)

Nashville, Tenn. – Country band Alabama will mark their 50th year together with a new tour in 2019, more than a year after founding member Jeff Cook announced that he has Parkinson’s disease.

The Grammy-winning trio of Randy Owen, Teddy Gentry and Cook formed in 1969 in Fort Payne, Alabama, and went on to dominate the sound of country music in the 1980s, scoring dozens of No. 1 hits, including classics like “Mountain Music” and “Dixieland Delight.”

Guitarist and fiddle player Cook announced in 2017 that he had been diagnosed with the chronic neurological disorder years ago and he would limit his touring with the band. Cook will perform on their new tour, which begins Jan. 10 in Detroit, as much as he’s physically able.