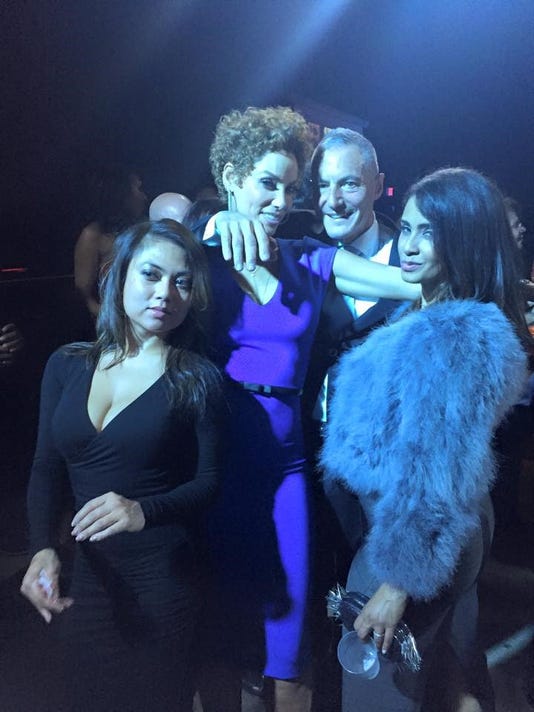 Nicole Murphy in the house

In case you were wondering if that statuesque beauty with the curly tresses, wearing a short, clingy cobalt blue dress at the NAIAS Charity Preview last Friday was model Nicole Murphy, it was. The stunning 47-year-old mother of five and former wife of actor Eddie Murphy (and most recently, ex-fiancé of TV personality and former pro athlete Michael Strahan) was in town as a special guest at a Charity Preview after party, "Detroit Glamour," at Bert's that drew some 600 folks. The bash was hosted by Murphy, Dennis Archer Jr., Jeff Cauley, Leon Richardson, D'Usse Cognac and Grey Goose vodka. Murphy also shot a cover for an upcoming Ambassador Magazine while she was in town.

Our artsy friends have been grumbling for weeks about that recent Vulture.com story that profiled nine artists, who talked about why they live in Detroit — all nine happened to be young white hipsters (sigh). So we're glad to hear there's big buzz by national art types (Hi Fructose, Huffington Post) on a new exhibit Roula David has opening Saturday at the Inner State Gallery, "We Have a Dream," featuring emerging Detroit artists of all sorts of ethnicities and ages. As a theme, curator David asked the artists to listen to and ponder Dr. Martin Luther King's "I Have A Dream" speech, first given in Detroit in 1963, and then produce something depicting their own dream. David wasn't prompted to do it because of the Vulture.com story, but she's happy it ended up being such a representative group. "I really wanted it to be people who were my friends, and who were respected in the community. It turned out to be really diverse," David said. "Forty-five artists, and there is stencil work, photography, oil paintings, marker drawings, sculpture, it's all over the place." Inner State is at 1410 Gratiot, Detroit; the exhibit is free and open to the public. The artist reception starts at 7 p.m. Saturday. The show runs through Feb. 21. Call (313) 744-6505 for hours.

And so it is carved

It hasn't been announced yet, but we hear that Juliette Okotie-Eboh has been removed as one of the five-member Detroit Regional Convention Facility Authority (sort of the Cobo board of directors), one of the changes being made by newly elected Wayne County Executive Warren Evans. Okotie-Eboh, who is senior VP of MGM Grand Detroit, will be replaced by Lisa Canada, a director at the Michigan Regional Council of Carpenters and a member of Evans' transition team. It surprised some insiders, as the DRCFA oversaw the much-admired $300 million redo of Detroit's premier convention center, and the original five members of the board, of which Juliette is vice chair, have been in place since the board's inception in 2009. We caught up with Okotie-Eboh, who insisted, "I'm totally good with it. I know that this team did a bang-up job over the last five years. We were never really told when the term would be up; I knew it wouldn't be forever, and I know our efforts were appreciated." Yes, and her name is carved permanently into the wall at Cobo — oops!

On Saturday from 7 a.m. to 4 p.m., 94.7 WCSX-FM will host the "Cold as Ice" ice fishing tournament to benefit THAW (The Heat and Warmth Fund) at Lake St. Clair Metropark. Anglers will compete for prizes for the top 10 catches. The one who catches the heaviest perch gets a $500 Sportsmen's Direct Bait & Tackle gift card, and second place earns a 4 Seasons Cart Blind (wait, someone tell us what a Cart Blind is!). There is a $25 registration fee and WCSX will broadcast live.