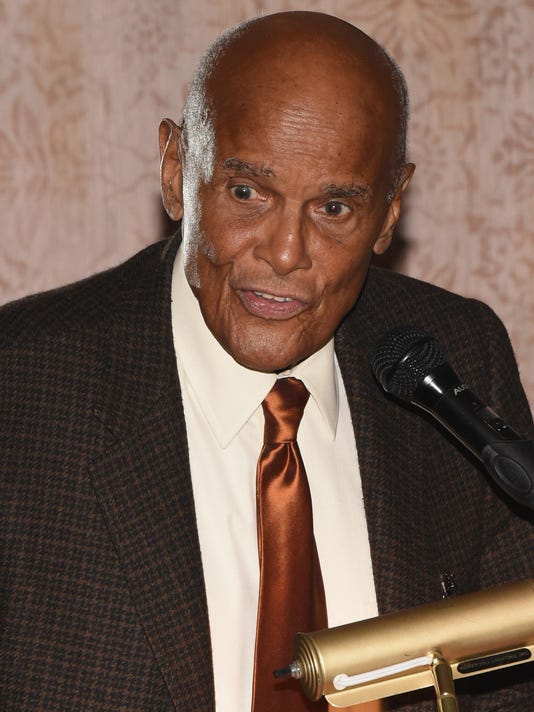 Singer and activist Harry Belafonte and Academy Award-winning actress Geena Davis will headline this year’s winners of Muhammad Ali Humanitarian Awards, reports the Associated Press. The awards are named after the former heavyweight boxing champion, who has focused on humanitarian causes since leaving the ring. Ali is scheduled to attend the Sept. 19 ceremony in his hometown of Louisville, Kentucky. Organizers said Tuesday that Belafonte will receive the Muhammad Ali Humanitarian Award for Lifetime Achievement for his contributions to civil rights. Davis will receive the Muhammad Ali Humanitarian of the Year Award for her efforts to promote gender equality. Awards also will go to six people age 30 or younger who have represented core principles promoted by Ali: confidence, conviction, dedication, giving, respect and spirituality.

Comedian and box office star Melissa McCarthy recently spoke out about her new clothing line, Melissa McCarthy Seven7, which will be carried in stores like Nordstrom and Macy’s and on the Home Shopping Network. It spans sizes 4-28. The “Ghostbusters” star told Refinery 29 that she thinks the term “plus size” is bad business. “Seventy percent of women in the United States are a size 14 or above, and that’s technically ‘plus-size,’ so you’re taking your biggest category of people and telling them ‘You’re not really worthy.’ I find that strange,” says McCarthy. “It doesn’t make a lot of sense numbers-wise. It’s like, if you open a restaurant and you say, ‘We’re primarily gonna serve people that don’t eat.’ It’s like, what? You would be nuts.” McCarthy moved to New York City in the 1980s to attend fashion school.

Over the weekend, comedian Mike Epps sparked up a conversation with what seems like a random female Twitter user. He sent her a tweet that just said “hey,” and asked her if she was on “ig” (Instagram). The woman, whose Twitter name is Ceci Citra (@CeciCitra), responded “not anymore. Wasn’t getting the likes I deserve.” Then he asked her to send him a direct message. Monday night Epps’ wife, Mechelle Epps, chimed in, simply sending a tweet with both of their user names and an image of two eyeballs. Shortly after it was revealed that Epps’ Twitter account blocked @CeciCitra, as evident by a screen shot she posted. Epps is on board to play Richard Pryor in an upcoming biopic.

■To entice folks to donate to Detroit’s Downtown Youth Boxing Gym, Eminem is rewarding those who give a chance to win limited-edition memorabilia. Donate by Aug. 30 and you’ll be entered to win things like a pair of autographed “Southpaw” boxing gloves. One grand prize winner will get a handwritten response to a “Stan” fan letter from Eminem. Go to ShadyRecords.com to donate.

■Lionel Richie will be honored as the 2016 MusiCares Person of the Year at the 26th annual gala in February. A tribute concert will include performances by Lady Antebellum, Pharrell Williams, Luke Bryan and more.