Grapevine: Madonna says America ‘can only go up’

Grapevine: Madonna says America ‘can only go up’ 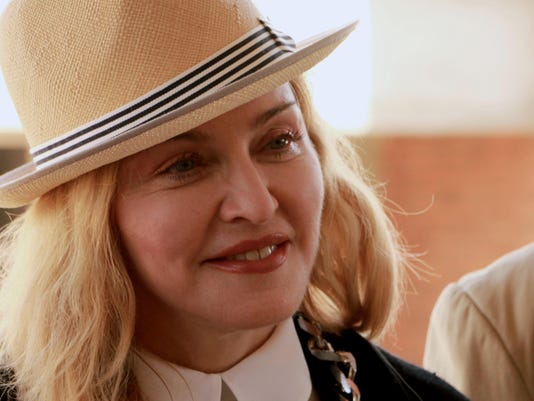 Madonna says America ‘can only go up’

For anyone upset about Donald Trump becoming the 45th president, Madonna — a Hillary Clinton supporter — tried to look at the upside before his inauguration Thursday night. “He’s actually doing us a great service, because we have gone as low as we can go,” she said during a talk at the Brooklyn Museum. “We can only go up from here, so what are we going to do? We have two choices: destruction and creation. I chose creation.” The panel included artist Marilyn Minter and was moderated by poet Elizabeth Alexander, who performed during former President Barack Obama’s first inauguration. Madonna and Minter said they would continue to lead protests against Trump and are planning to attend the Women’s March in Washington Saturday. Wearing a black shirt that stated “Feminist” in white, Madonna, 58, said that she believes Trump was elected for a reason: “To show us how lazy and un-unified and lackadaisical and taking for granted we’ve become of our freedom and the rights that we have as Americans. I feel like people forgot what was written in the Constitution.” She added: “They always say it’s darkest before the dawn, and I feel this had to happen to bring people together, so let’s get this party started.”

Sixteen-year-old Jackie Evancho is seeing a boost in popularity due to her Inauguration Day performance of the national anthem. The Los Angeles Times reported that the 2010 “America’s Got Talent” star saw a spike in concert ticket sales after she announced on the “Today” show in December that she would sing “The Star-Spangled Banner.” Evancho will perform Feb. 12 at the Cerritos Center for the Performing Arts in California, followed by more stops in Florida, Pittsburgh and Seattle. Other inauguration weekend performers include Toby Keith, 3 Doors Down, Lee Greenwood and The Piano Guys.

“He will not divide us,” shouted Shia LaBeouf and several teenagers on Friday. The group was recorded by a camera placed outside the Museum of the Moving Image in New York that morning. Actor Jaden Smith, the 18-year-old son of Will Smith, was also spotted on camera, citing the mantra for three hours. According to the website hewillnotdivide.us, the camera will be livestreamed 24/7 for the next four years. The website states “ ‘HE WILL NOT DIVIDE US’ acts as a show of resistance or insistence, opposition or optimism, guided by the spirit of each individual participant and the community.” The public art project was created by LaBeouf and collaborators Nastja Säde Rönkkö and Luke Turner.

■Train announced this week a new tour, Play That Song. The 45 stops include one at DTE Energy Music Theatre June 25. Special guests include O.A.R. and Natasha Bedingfield. Tickets go on sale 10 a.m. Jan. 27, the same day Train releases its 10th studio album “a girl a bottle a boat.” It will be their first album since 2014’s “Bulletproof Picasso.”