Lady Diana Spencer and Camilla Parker-Bowles are shown at the Ludlow Races where Prince Charles is competing in 1980. Britain prepares to mark the twentieth anniversary of the death of Diana, Princess of Wales. August 31, 1997, when Britain's Diana died in a high-speed car crash in Paris. Express Newspapers, Getty Images
Fullscreen

Lady Diana, Princess of Wales and Charles, Prince of Wales, are seen during their wedding at St Paul Cathedral in London, July 29, 1981. AFP, AFP/Getty Images
Fullscreen

Prince Charles and the then Princess of Wales walk at Westminster Abbey in London, for a centenary service for the Royal College Of Music, February 28, 1982. Fox Photos, Getty Images
Fullscreen

Britain's Princess Diana, the Princess of Wales, hugs and plays with an HIV positive baby in Faban Hostel, San Paulo, on the second day of her visit to Brazil, April 24, 1991. Dave Caulkin, AP
Fullscreen

The Prince and Princess of Wales stand at the memorial to the British Gloster Regiment, which fought with distinction in 1951 during the Korean War, November 3, 1992,.outside Seoul. EPA, AFP/Getty Images
Fullscreen

A mourner places more flowers on the pile outside the gates of Buckingham Palace in London, Sunday Aug. 31, 1997, following the death of Diana, Princess of Wales. ADRIAN DENNIS, Associated Press
Fullscreen

A mourner weeps outside the gates of Buckingham Palace in London, Sunday, Aug. 31, 1997, following the death of Diana, Princess of Wales. ADRIAN DENNIS, ASSOCIATED PRESS
Fullscreen

The Prince of Wales looks towards his sons Prince William, left, and Prince Harry as they wait for the coffin of Princess Diana to be loaded into a hearse after their mother's funeral service in Westminster Abbey in London, Saturday, September 6, 1997. JOHN GAPS III, AP
Fullscreen

The coffin of Diana, Princess of Wales, gets through the Mall in front of Saint James Palace, in London, September, 6. 1997. THOMAS COEX, AFP/Getty Images
Fullscreen

These are two images showing the wedding of Lady Diana, Princess of Wales with Prince Charles of Wales at St. Paul Cathedral in London on July 29, 1981, left, and an image showing Kate Middleton standing at the altar with her husband to be Prince William at Westminster Abbey on April 29, 2011. AFP, AFP/Getty Images
Fullscreen

This photo combination shows Britain's Prince Charles kissing Diana, Princess of Wales, during their wedding in London on July 29, 1981, and Britain's Prince William, above, kissing his wife Kate, Duchess of Cambridge, on the balcony of Buckingham Palace on April 29, 2011, in London. -, AFP/Getty Images
Fullscreen

A tourists takes a close up photo with her smartphone of tributes and memorabilia for the late Diana, Princess of Wales, outside Kensington Palace in London, Tuesday, Aug. 29, 2017. Alastair Grant, AP
Fullscreen

Photographs of Diana, Princess of Wales, are seen tied onto a gate outside Kensington Palace in Central London on August 29, 2017 ahead of the 20th anniversary of Princess Diana's death. DANIEL LEAL-OLIVAS, AFP/Getty Images
Fullscreen

Royal fan John Loughrey wears a hat adorned with a picture of Britain's Diana, Princess of Wales, as he talks to media outside one of the entrances to Kensington Palace, August 29, 2017. DANIEL LEAL-OLIVAS, AFP/Getty Images
Fullscreen

Britain's Prince William, his wife, Kate, and brother Prince Harry encouraged runners at a Heads Together cheering point along the route of the 2017 London Marathon in London in April. Heads Together is a mental health charity supported by the three British royals. Princess Diana’s legacy lives on through her two sons, who have passionately adopted their mother’s more personal approach to the monarchy and to the public.(Photo: Matt Dunham / AP)

London — It was so human. So accessible. So very Diana: Prince William, the heir to the British throne, sprinting down the track at London’s Olympic Park with his wife, the Duchess of Cambridge, and his brother, Prince Harry, in a relay race this year promoting mental health.

There was a time when such a scene would not have happened.

Princess Diana, a preschool teacher thrust into the glare of celebrity by her marriage to Prince Charles, dragged Britain’s ribbon-cutting royals into the modern world. She made a direct connection with the public — once running her own race in a flowing white skirt and baggy sweater — and promoted causes far from the mainstream at the time, like land mine removal and AIDS research.

That link lives on through her sons, who have adopted their mother’s more personal approach to monarchy and in the process reinvigorated the institution.

“She was the first royal who really took the public’s heart,” said Sandi McDonald, 55, standing outside an exhibit of the late princess’ dresses at Kensington Palace. “I think her sons are the same — the public just loves them.”

William and Harry are the most obvious reminders of Diana’s impact. They have spoken openly about their own mental health issues over losing their mother while so young and broken down taboos just as their mother did by embracing AIDS patients to ease fears about the disease. But the princess’ most far-reaching legacy is her popularization of the idea that celebrities can use their ties to millions of people they’ve never met to bring about change.

Children wait in line as Diana lends a hand to serve the food at the Child Feeding Scheme at Nemazuva Primary School in Zimbabwe on July 12, 1993. She was on of the first to realize that celebrities could use their influence to bring about change. (Photo: Barry Batchelor / PA Wire)

Having been swallowed up by the royal machine when she was barely 20, Diana found her way in life after realizing that the public was fascinated by her every thought. She was able to manipulate that interest to promote causes such as land mine clearance and to tell her side of the story when her marriage collapsed amid Prince Charles’ relationship with Camilla Parker Bowles, who later became his second wife.

Today’s celebrities in every field have adopted that model — created when newspapers and the evening news were the primary sources of information — and pumped it full of steroids in the world of Facebook and Instagram.

“You can sort of trace the molecular chain or genetic chain between Diana and Kim Kardashian,” said sociologist Ellis Cashmore, the author of “Elizabeth Taylor: A Private Life for Public Consumption.” 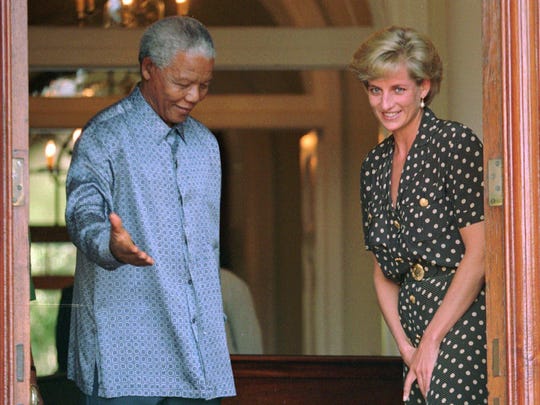 While every wannabe celebrity today posts their secrets on social media, in the 1990s it was unimaginable that a royal would share personal hopes and fears with the world. But trapped in a loveless marriage, Diana chose to take her message to the people who loved her.

She covertly cooperated with biographer Andrew Morton to get her story out, using an intermediary who recorded tapes of her answers to the author’s questions so she could deny ever having spoken with Morton.

“This was a quite remarkable thing that she was doing,” Morton told The Associated Press. “Here she was, talking about the most intimate details of her life — about this woman called Camilla, about her eating disorders, about her half-hearted suicide attempts — to me, who was a relative stranger. … She was talking about things which no princess had ever spoken about before.”

The gamble paid off. Diana’s story was told, and the public loved her all the more. Her funeral featured an unprecedented outpouring of grief and emotion, with tens of thousands lining the streets and mountains of flowers piled outside Kensington Palace. It was a transformative event for the royal family and for Britain, Morton said.

“No longer were we seen as the stiff-upper-lip, do-not-touch nation,” Morton said. “We were seen as a trembling lower lip (nation), not afraid to emote, to shed our tears in public.”

After Diana’s death, the royals also learned they had to change. 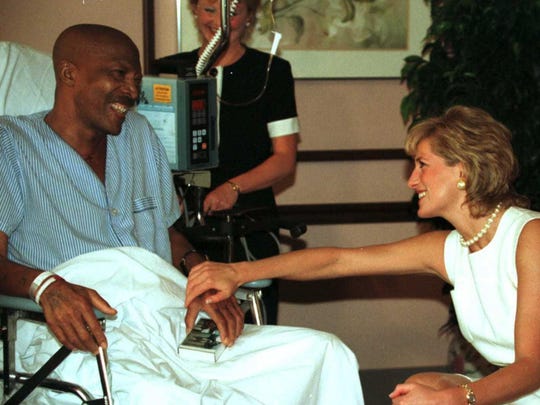 Queen Elizabeth II returned to the capital from vacation in Scotland and gave a speech from Buckingham Palace that quieted days of headlines accusing her of being indifferent to Diana’s death. A more accessible monarchy has followed.

Last year, as Britain celebrated the queen’s 90th birthday for months, the queen joked at a street party outside Buckingham Palace that while she appreciated the cards and messages, “how I will feel if people are still singing ‘Happy Birthday’ to me in December remains to be seen!”

As William and Harry grew up, they inherited Diana’s ability to communicate with the public. To the delight of mental health charities, they and the Duchess of Cambridge have fronted a campaign to persuade people to open up about mental health struggles. One charity, Mind, said the day after Harry spoke about his struggles following his mother’s death their public inquiry line received a 38 percent increase in calls.

“It shows how far we have come in changing public attitudes to mental health, that someone so high-profile can open up about something so difficult and personal,” said Paul Farmer, the chief executive of Mind.

The young royals have also brought other luminaries into the conversation. In one video, Prince William spoke with pop star Lady Gaga, who told of her struggles with post-traumatic stress disorder.

Diana “knew, even from an early age, that she wanted to groom them more in the image of modern princes, that they would be able to reach out to people,” said Morton. “She did not want a … do-not-touch sign over the future of her children.”

Diana also changed the public’s expectations of national figures, Cashmore said, noting that Britons are no longer satisfied with a distant monarchy. Her sons’ common touch is one reason for the often-denied speculation that William will take the throne after the queen’s death, skipping his less popular father.

“The royals were always formal and stuffy and didn’t have a connection with the public. Diana came along, joined the family and changed the royals forever, because after that even the queen softened, became more approachable,” Glossop said. “Her boys have grown to be Diana’s boys. Everything we loved about her carries on in the family.”