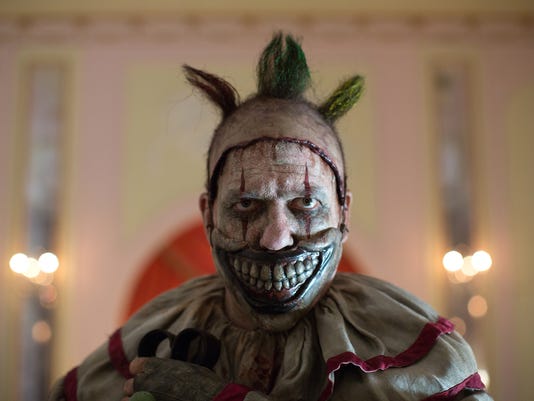 When “American Horror Story” creator Ryan Murphy first contacted actor John Carroll Lynch about a possible role on the fourth season of his gleefully deranged hit, he was upfront about his aims for a new character: a silent, grinning killer straight out of a child’s nightmare.

“He described it in a way that I understood it to be somebody calling me up and going, ‘We’d like you to play my version of the Phantom of the Opera,’ ” Lynch recalled recently. “He said he wanted to create the most terrifying clown in the history of television.”

By all accounts, he succeeded. Lynch’s Twisty the Clown has become the chief talking point of “American Horror Story: Freak Show,” quite an achievement considering Murphy stocked the latest season of his Emmy-winning anthology series with conjoined twins, a bearded Kathy Bates and a three-breasted intersex woman played by Angela Bassett.

But the locals greet the performers with hostility and suspicion, which only intensifies after a series of inexplicable murders and abductions shocks the sleepy Southern town.

Unlike Elsa’s circus, “Freak Show” had no trouble attracting viewers when it debuted earlier this month. A total of 10 million people watched the season premiere, making it the most watched program in the history of FX.

Not everyone was pleased with what they saw, however — some children’s entertainers complained that Twisty was likely to exacerbate coulrophobia, the fear of clowns. And they might have a point.

In his first moments on screen, Twisty, wearing stained satin ruffles and a mask of giant teeth, interrupts a lovers’ lakeside picnic, presenting a young woman with plastic flowers before stabbing her boyfriend to death on their red, checkered blanket.

He holds his living victims in a remote, abandoned school bus.

Lynch insists, though, that while Twisty is a terrifying villain, he’s more than just a mute slasher, and upcoming installments of the show will reveal telling details about his personal story.

“It’s great to play a character that is so starkly drawn, and it’s really fun to be a bad guy,” Lynch said. “In this case I really like that Ryan and the writers have provided not only a really terrific, scary character, but also they provided a lot of humanity that you’ll learn about as the season progresses.”