Trump campaign challenging comics to think outside the box

Trump campaign challenging comics to think outside the box 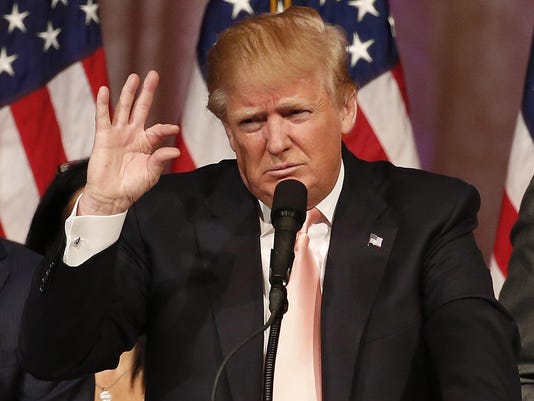 New York — Donald Trump’s presidential campaign is far from ordinary, and late-night television humorists are pushing boundaries in order to keep up.

The most memorable Trump-inspired comedy of the past few months has been more intricate than monologue jokes, reflecting a tough competition for laughs and knowledge that the best material can have a long life online.

John Oliver’s epic, 20-minute Trump takedown, with research that revealed the family’s name was once “Drumpf,” has logged more than 2 million YouTube views. He methodically debunks the beliefs of Trump fans, even as he marvels at the candidate’s brazenness. “There’s a part of me that even likes this guy,” the HBO host said. “It’s a part of me I hate, but it’s a part of me.”

ABC’s Jimmy Kimmel reunited Matthew Broderick and Nathan Lane as their old characters from “The Producers,” whose chosen scam is the Trump campaign instead of a musical about Hitler. They soon recognize the story “starts out funny and then gets really, really depressing.”

While Darrell Hammond effectively impersonates Trump on “Saturday Night Live,” none of the show’s political skits have matched the impact of the “racists for Trump” commercial parody. Trevor Noah’s best moment since replacing Jon Stewart on “The Daily Show” came when he compared Trump’s words to those of African dictators.

“There are a lot of ways where a comedian can tell easy jokes about Trump and they keep repeating themselves,” said Robert Thompson, director of Syracuse University’s Bleier Center for Television and Popular Culture. “But the really good stuff is very sophisticated, very probing political satire.”

Comics were nearly shaking with excitement when Trump announced his candidacy, anticipating a great diversion to a serious campaign. Yet as the outrageous statements piled up and Trump maintained a high standing in the polls, it wasn’t so funny anymore — a point Thompson noted was effectively made in a routine by Comedy Central’s Larry Wilmore.

“Trump is sort of a double-edged sword,” said Matt O’Brien, head writer for Conan O’Brien’s TBS show. “On the one hand, he gives you so much to make fun of every day. The real problem is there are now 15 hosts going after the same piece of meat. It’s hard to be original with him, because everyone is coming after him from all angles.”

The atmosphere for late-night comedy is far different from when the choice was essentially Jay Leno and David Letterman one-liners.

That’s made people in late-night take detailed looks at Trump and his supporters. You may still hear jokes about Trump’s orange tint or gravity-defying hairstyle, but they already feel old and tired.

The Internet adds another layer of competition. Some jokes that pop online, like the memes that compared Chris Christie to a hostage for how he looked standing behind Trump at a news conference, work much better than they would on television, said Jo Miller, executive producer of Samantha Bee’s “Full Frontal” on TBS.

Bee’s show this week staged a party for Trump supporters, supplying drinks, massages and fact-checkers who quickly became overworked by the conversation. “How do you fact-check bluster?” Bee asked.

The programs that have taken up the Trump challenge have done so in ways that amplify their particular strengths. Few programs, for example, can match the “Saturday Night Live” tradition of commercial parodies, Miller said. Kimmel shines in Hollywood-like short pieces. Seth Meyers has a more traditionalist’s approach, anchored by strong writing. Oliver’s signature is lengthier stories based on research done with journalistic rigor.

O’Brien’s show is usually more intent on being silly than in being political. The show has a running segment with a Trump impersonator who phones in to the host, like Trump has been doing with news programs. Sarah Silverman was also invited on to play Adolf Hitler and react to comparisons made between Trump and the notorious German leader.

“Trump has given each show a chance to do what they do best but in completely different ways,” Miller said.

Even with Trump as a font of comedy, late-night shows haven’t neglected other candidates. Bee has thoroughly lampooned Ted Cruz, and Larry David’s spot-on Bernie Sanders impersonation is a regular on “Saturday Night Live.”

However the Trump campaign ends, it has already left a television comedy legacy stronger than past political campaigns, Syracuse’s Thompson said.

“Political comedy on television has never been better,” he said.

As the Trump campaign took a darker turn last week, with demonstrations and violence at some of the candidates’ rallies, late-night comics kept up with him. Both Bee and Wilmore staged fake fights on their shows.

A Trump impersonator handed bottles to the two combatants on “The Nightly Show,” who proceeded to smash them over the other’s head.