New Syfy show wishes it were ‘The Walking Dead’ with vampires, but comes off too dreary and serious 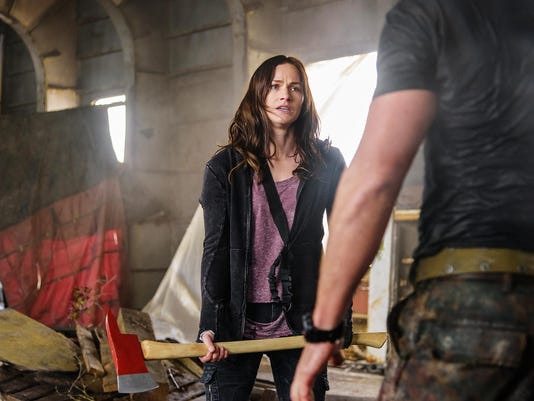 Kelly Overton stars as Vanessa Van Helsing, the woman who may save the earth from a world taken over by vampires in “Van Helsing.”(Photo: Dan Power / Helsing S1 Productions)

Vampires need a sense of humor.

OK, maybe not vampires themselves (although it doesn’t hurt), but stories about vampires do. The whole myth has become so beaten down and overused that a bit of bubbly is needed to offset the dreariness.

The best televised vampire series of the past two decades — “Buffy the Vampire Slayer,” “Angel” and “True Blood” — all understood this; “Van Helsing,” debuting tonight on Syfy, does not. Everything is deadly serious and, as a result, everything is just deadly.

Syfy has a habit of rebirthing legends, something it did far more successfully earlier this year with “Wynonna Earp,” which did have it share of laughs. With Van Helsing they are turning to a remote descendant of the famed vampire hunter, although you wouldn’t know it from the early episodes.

In those episodes we meet Vanessa (Kelly Overton, a hot werewolf on “True Blood”), who is initially in some sort of coma, being guarded by a lone marine, Axel (Jonathan Scarfe), in a hospital in Seattle. The world has apparently been taken over by vampires and what few humans are left are in need of a savior. Hint: Vanessa is that savior.

As thing progress, and Vanessa becomes conscious, we learn more. Vanessa has a daughter she wants to find, although chances are she’s dead. Vanessa has magic blood. Vanessa, inexplicably, can kick vampire butt, Buffy-style.

Vanessa never smiles or jokes around. As some more humans come to join her and Axel in their hospital refuge, they never smile and joke around either. An undertaker convention would be more fun than this show.

“Van Helsing” obviously wants to be “The Walking Dead” with vampires, but it lacks that show’s production values, cast and over-the-top imagination. Vanessa keeps telling people in the early episodes that there’s nothing special about her. Unfortunately, she’s right.