“Thank you for coming,” John Oliver told a room full of reporters who gathered last week at HBO’s midtown headquarters to query him about “Last Week Tonight.” 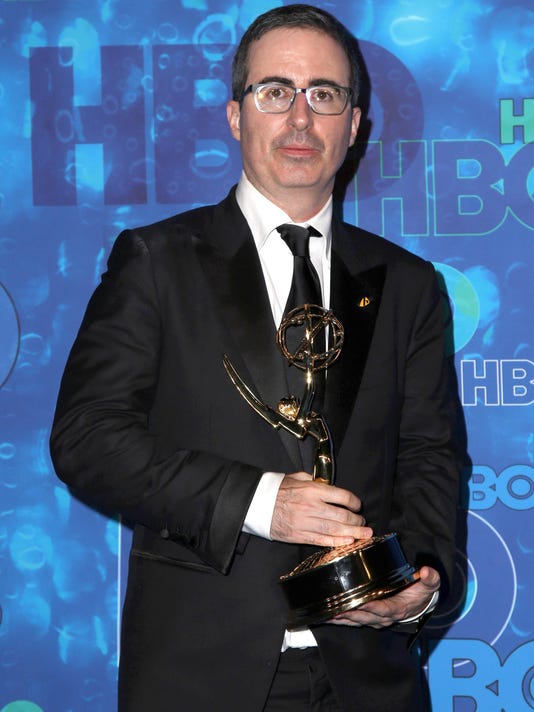 “Thank you for coming,” John Oliver told a room full of reporters who gathered last week at HBO’s midtown headquarters to query him about “Last Week Tonight.”

“I realize the Westminster Dog Show is on today. The fact you’re here and not there means a great deal,” he said.

Such self-deprecation is typical for the British comedian, yet as “Last Week Tonight” headed into its fifth season Sunday on HBO, even Oliver would find it hard to deny his cultural cachet.

His show has won a slew of praise, including back-to-back Emmys for variety talk series and, perhaps even more remarkably, has fired up Americans about such seemingly bone-dry subjects as net neutrality and civil asset forfeiture.

Maintaining the show’s focus on overlooked subjects amid a nonstop cycle of all-consuming Trump-related news has been challenging, Oliver told reporters. “It’s such a fire hose of … That’s the tricky thing. There’s so much low-hanging fruit, you can end up eating too much.”

But so far, “Last Week Tonight” has figured out a way to cover Trump without piling on the day-to-day firestorms — a good thing for a show that has been on hiatus since November, meaning it’s missed out almost entirely on material about Stormy Daniels, Rob Porter or Judge Roy Moore.

Last season included reports on gerrymandering and dialysis, for instance, but was book-ended with big-picture looks at Trump’s influence on American democracy.

“Lots of times the main story we talk about is pretty irrelevant to the week,” Oliver said, “but pretty relevant, we would argue, to the concept of being alive.”

After the breakfast, Oliver sat with the Los Angeles Times to talk:

Q: So you’re heading into your fifth season. What’s the biggest lesson you’ve learned so far?

A: The big lessons are less about the show that you see than the machine that produces that show. How you staff up, how you keep people interested — those are the harder tricks. It’s running the thing underneath the show that is the steepest learning-curve part of it and how each little decision can affect the product that comes out at the end of it.

Q: You haven’t been on the air since November, but you’ve been working most of that time. I am guessing the ratio of stories that get killed versus what makes it to air is pretty high. Can you talk a little bit about that process?

A: The thing that no one sees is the depth of things you don’t see in a story. We research and check stories beyond what I think most people would assume so that we’re usually calling and contacting people in each clip to make sure the story is being presented accurately. We speak to every company that we’re talking to at length, repeatedly, just to make sure there’s a dialogue in place so that we can run what we’re going to say by them so they can dispute it and have their say.

There are whole stories that you then don’t see because something you might have fallen in love with, there’s inaccurate reporting on it, or the story has shifted and there are multiple reasons why we might not be able to do it.

Q: You’ve got to spend a lot of time immersed in the news. What do you use as a mental palate cleanser?

A: The honest truth is that I don’t have much. My family would be a palate cleanser. And watching English football. That’s probably it.

Q: Do you get back to England much?

A: We went back for the first time for a week over the holidays. That was the first time I’d taken (his son) Hudson back to see England. I think he thought it was grayer than he was used to. Lots of Paddington Bear merchandise. The second movie was coming out so Paddington was ubiquitous to a genuinely creepy degree. You’d think Paddington was a monarch there.