Three of the Netflix show’s central characters encounter betrayal, agony and abuse at the hands of the state, each other 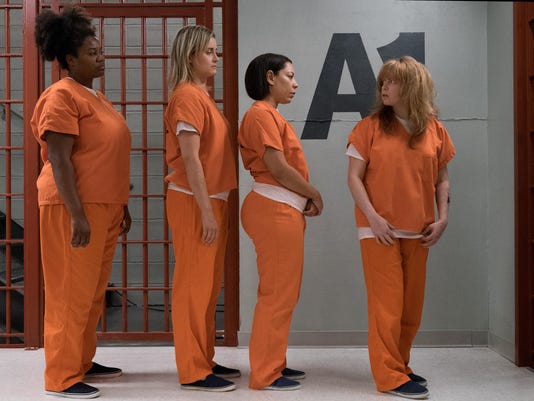 The characters are facing new challenges this season, including betrayal, agony and abuse at the hands of the state and each other, the actors say.(Photo: Cara Howe / Netflix)

“Orange is the New Black” is back, chronicling the fallout of Season 5’s prison riot as the women incarcerated at Litchfield are taken “down the hill” to a maximum-security facility.

In Season 6, three of the Netflix show’s central characters, Piper (Taylor Schilling), Red (Kate Mulgrew) and Daya (Dascha Polanco), encounter betrayal, agony and abuse at the hands of the state and each other.

The following is an edited transcript from an interview with the three actors:

Q: When the show began, I know many were excited to see representation of gender-specific incarceration and that the cast became involved in discussions about prison reform. The story’s changed quite a bit since Season 1. Do you still consider yourselves artist-activists?

Kate Mulgrew: Well, I’m a political activist, as is Taylor Schilling. On the outside, we do our thing, as we must do in these times.

Q: This season saw drug addiction, betrayal, gang fights — as artists, how do you feel about tackling such dark material in what many would call a dark period of time?

Taylor Schilling: It’s a question I am really grappling with. It’s a very different world we’re living in than when this show started.

Dascha Polanco: I’ve visited immigration detention centers, and I’ve visited prisoners with the consulate to see how we can help the under-served. There was a sense of hope back then, when you were able to work with WPA and other organizations. You had a hope that we were moving ahead, but after revisiting these institutions, it’s very clear that the possibilities of things moving are at a standstill. There’s no moving further.

K.M.: And now the show’s dealing with the most perilous organization of all, which is ICE. We’re going to move into that in (Season) 7. Jenji Kohan will do her level best to serve that, but you can only choose one thing at a time. And unfortunately, we’re in a swamp now.

T.S.: It doesn’t even make sense to talk about these things right now, because it’s such a web of devastation. You can trace the chain back to sanctioned racism and the way our country was founded.

K.M.: Black Lives Matter, #MeToo, all of it is nothing compared to what is going on. It’s unfathomable that that’s where we are. So, we’re trying to do this television series with great integrity. We can only bring tiny little bits to it. What once looked terribly promising is now a veritable morass.

Q: Let’s talk about how that cultural context framed your characters’ journeys. All three seem to be dropping further and further into their own abysses.

D.P.: At this point, Daya’s the living dead. I think giving up her daughter made her think, “There’s nothing that could kill me any further.” That’s what I was trying to bring up in her. In regard to the opioids, I think it’s an escape tool that she uses to escape her reality. And the relationship that has developed with “Daddy” (Vicci Martinez) isn’t a romantic relationship. I think it’s her looking for support.

K.M.: The sexual aspect of it means nothing to Daya. When you’re in that kind of agony, you’d do just about anything to forget.

D.P.: But, she does have this sense of compassion for Daddy, but it’s more like, “I can’t respond to you the way you would love for me to respond.”

Q: Was it draining to take on that energy?

D.P.: There’s no support for stuff like that within the prison system, which made me feel exhausted and realize how many things people are going through that I have no control over. Being exposed to that reality outside reinforced my character.

Q: In this new season, the women have been split up and put into max-security prison. Did this change of setting and “rules” make you feel like you were making a new show?

T.S.: There’s been intense gearshifts every season since the first two. The structure of the show has changed so dramatically.

D.P.: But, it’s also changed with the times — if we’re comparing it to real life. We’re also in a new environment that’s completely different, totalitarian, filled with abuses of power.

K.M.: It lends a whole new meaning to instability. We are all on very thin ice.

Q: Each season tries to take on themes relevant to current events. Season 4 had an “I can’t breathe” moment. What do you think are the central themes of this season?

K.M.: I feel like the central theme is betrayal. Betrayal of self. Red is betrayed by everybody.

D.P.: That’s what I feel is happening on the show, like we come from Litchfield with some sense of loyalty and connection, and then it’s every man for himself.

Q: All three of you also have their trauma manifest physically this season. How did wearing that pain change your understanding of your characters?

K.M.: They scalped me last season — with the scalping began the disintegration of my character, the mettle of Red. It’s a very tough thing, indicating my own self-betrayal. But, I love the way that it’s physicalized. She’s been completely reduced.

D.P.: I think that’s what we see with incarcerated women — we see them deteriorate when you don’t set them up to change or be productive. You strip them of their rights. You see that in Daya in this season, when she’s just falling apart, just trying to cope and exist with what’s going on with her.

K.M.: It’s wonderful to look at the damage. We’re all so damaged. And I think that’s what (Season) 6 shows — the extent of it. How many times can you be knocked down?

Q: How about Piper? She was the vehicle into the show during Seasons 1 and 2, and that’s just not the case anymore.

T.S.: No, it’s a completely different show, and she’s a completely different character in a lot of ways. She doesn’t really make a lot of sense anymore. I think there was a lot of emotional logic at one point, but that’s gone out the window in the past few seasons. It is what it is. This year there is a lot of physical trauma, but Piper has been beat up a lot. That physical trauma has been pretty consistent for her, just with like the branding ...

T.S.: So, I feel like this isn’t new. I feel like the arc of their getting hurt and then having a come-to-Jesus moment has been happening for seasons and seasons now.

T.S.: It makes sense that there’s no development. She falls down and makes the same mistake over and over again.