Fox News falls behind rivals on tough day for Trump

Fox News falls behind rivals on tough day for Trump 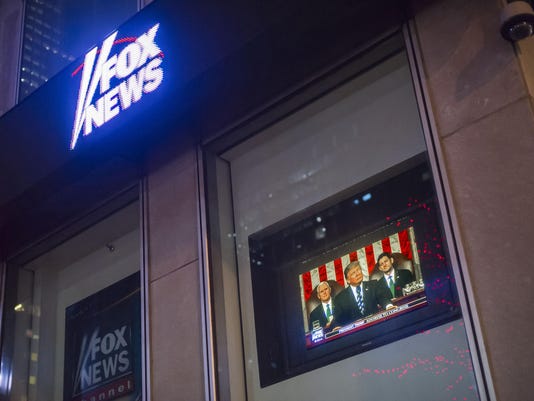 The News Corp. building in Midtown Manhattan in New York shows the Fox News broadcast below their news ticker of President Donald Trump's speech to a joint session of Congress on February 28, 2017. Fox News has enjoyed a surge in cable ratings as the destination of choice for President Trump’s supporters. But the conservative-leaning network – typically the top-rated channel – scored a rare third-place finish in prime-time ratings Tuesday in the advertiser-coveted 25-to-54 age group, behind CNN and MSNBC, according to Nielsen data.(Photo: Richard B. Levine / TNS file)

Call it the anti-Trump bump.

Fox News has enjoyed a surge in cable ratings as the destination of choice for President Trump’s supporters.

But the conservative-leaning network – typically the top-rated channel – scored a rare third-place finish in prime-time ratings Tuesday in the advertiser-coveted 25-to-54 age group, behind CNN and MSNBC, according to Nielsen data.

The ratings dip came on a day many pundits described as the worst of Trump’s presidency, a one-two punch of his former campaign chairman, Paul Manafort, being convicted of bank fraud and tax evasion, and his former lawyer Michael Cohen saying in court that Trump ordered hush money deals to pay off two women he had allegedly had sex with. Cohen pleaded guilty to campaign-finance, bank and tax violations.

MSNBC, the channel on which criticism of the president is most harsh, won prime-time Tuesday night with 709,000 viewers in the demographic, according to Nielsen. CNN was second with 638,000 viewers, while Fox News had 613,000.

Among all viewers, MSNBC had the most with 3.3 million, followed by 2.9 million for Fox and 1.7 million for CNN. MSNBC’s 9 p.m. host Rachel Maddow scored 3.8 million viewers, her second-largest audience ever.

One day does not make a trend. But viewer response to coverage of the Manafort verdict and Cohen’s guilty plea raises the possibility that Fox may not be able to sustain its ratings dominance as Trump faces more scandal, and underscores the deep ideological divide in cable news.

“You can see how America is,” said a cable news executive with CNN who was not authorized to comment publicly on the ratings. “When news is good for the president, Fox ratings go through the roof. And when the news is bad, they don’t, and last night, they didn’t.”

Fox News commentators and opinion hosts have been staunch supporters of the president, who often praises the network for its favorable coverage, and it has served the network well from a business standpoint.

But a day like Tuesday, when Cohen implicated the president in a felony, raises the question: What happens when the actions of the White House become indefensible?

A prolonged legal battle or impeachment proceedings for the president could demoralize his supporters and result in their spending less time watching Fox. Or it could become an electronic bonfire for Trump loyalists to rally around.

The course is hard to predict, even though Fox News has seen its ratings roiled by Republican misfortunes before. There was a ratings dip after former President Bush’s botched handling of Hurricane Katrina. Fox News competitors also saw a ratings surge in 2008, with the election of Barack Obama. In both cases, Fox News critics believed the channel’s reign of ratings supremacy would slip away.

But Fox News has never lost its leadership position – it has been No. 1 since 2002 – largely because it has cornered the market on viewers who see other established media outlets as being too liberal. That position has only solidified during the Trump era.

Fox News critics accused the network of playing down the bad news about Trump on Tuesday by focusing on the murder of Mollie Tibbetts, the University of Iowa sophomore. Cristhian Rivera, a 24-year-old immigrant who authorities say is in the United States illegally, has been charged in the crime. (The Tibbetts case is actually the kind of story that used to get saturation coverage across all cable news channels before the outlets became obsessed with the unpredictable Trump presidency).

“We don’t program the network for the media critics,” a Fox News representative said. “Fox News Channel has been No. 1 in cable news for 16 1 / 2 years and the No. 1 network in cable for most of this year, so clearly viewers agree with our editorial decisions.”

Even if Fox News devoted all of its time to the Manafort verdict and Cohen plea, viewers were more likely to head for outlets on which they would get more critical coverage of Trump.

“The reason Fox News usually wins is not their raw number of viewers; it’s the sheer amount of time their viewers spend on the channel versus the shorter time spent viewing by the CNN and MSNBC audiences,” said Jonathan Klein, a former CNN president. “On a news day like Tuesday, anti-Trump viewers on MSNBC and CNN will stick around far longer than usual to soak up every gory detail, which raises their ratings.”

While Fox News ratings may take a hit if Trump stumbles further, the network is in the best position to recover by being the conservative alternative to the others. One Fox News executive said privately that not every viewer is a Trump fan, but some may just prefer it to CNN or MSNBC, on which one contributor, Elise Jordan, described the president as “a scumbag.”

If Trump is driven out of office, it will likely generate glee from many of the liberal commentators on MSNBC. But it will also be the end of one of the biggest stories in cable news history, one that began in 2015 when Trump entered the race for the White House.

“The danger is that when you’re Fox, when (Trump’s) in trouble, you’re in trouble,” said an NBC News executive who was not authorized to comment publicly. “And if you’re MSNBC and CNN, if he goes away, all bets are off.”