Helen Hunt, Paul Reiser reunite for ‘Mad About You’ sequel

Helen Hunt, Paul Reiser reunite for ‘Mad About You’ sequel 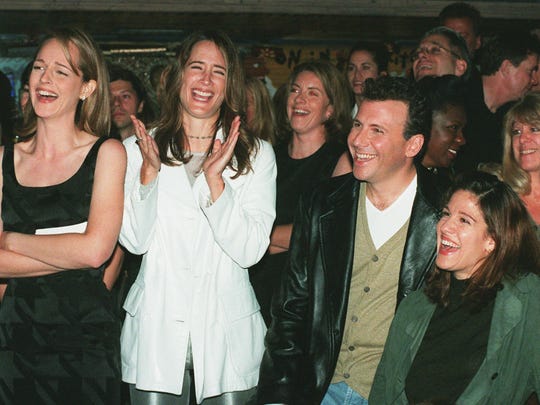 In this Nov. 11, 1996, file photo, "Mad About You" cast members Helen Hunt, from left, Anne Ramsay, Paul Reiser and Reiser's wife Paula laugh at a satiric video made by the show's crew during a private party at the House of Blues in West Hollywood, Calif., to celebrate the NBC television comedy's first 100 episodes. (Photo: Chris Pizzello / AP, file)

Los Angeles – Paul and Jamie Buchman are picking up where they left off 20 years ago on “Mad About You.”

The original series, which aired from 1992 to 1999, followed the Buchmans as newlyweds through early parenthood.

The sequel will explore modern marriage from the perspective of empty nesters, Spectrum said. It’s set to debut in late 2019.

In a statement, Hunt and Reiser promised the same funny, heartwarming show, adding, “as soon as we can remember what’s funny about being older.”

Danny Jacobson, who co-created the show with Reiser, is a consultant.