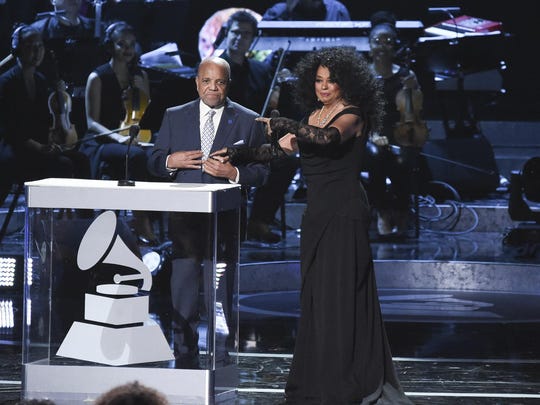 Berry Gordy and Diana Ross at the “Motown 60: A Grammy Celebration” at the Microsoft Theater in February in Los Angeles. (Photo: Photos by Richard Shotwell / AP)

Los Angeles — Motown Records founder Berry Gordy looked out at the audience at a 60th anniversary tribute to his groundbreaking record label and saw his dream of making music for “all people” in the world fulfilled.

Gordy told the packed Microsoft Theater at the “Motown 60: A Grammy Celebration” that he wanted his label to bring people together from all walks of life through “a legacy of love.” The pre-taped concert, hosted by Smokey Robinson and Cedric the Entertainer, with an all-star lineup including Stevie Wonder, John Legend, Diana Ross, Meghan Trainor and Tori Kelly, airs Sunday on CBS.

“My dream came true,” said Gordy, who started the African American label in 1959, building a roster that included superstar artists such as Marvin Gaye, Michael Jackson, The Temptations, The Supremes and Diana Ross.

“I want to thank all of you fans, and your parents, and their grandparents. All around the world. I could say their great grandparents, but that would make me older than I want to be.”

When Gordy launched Motown, he gave black musicians the platform to showcase their talents at a time when they struggled to get their records played on mainstream radio stations. His label introduced and helped launch the careers some of the biggest selling music stars from Gaye to Lionel Richie.

His label paved a way for the Motown Museum to be built in Detroit. It was the first headquarters of Gordy’s music empire where Wonder, The Supremes, the Miracles and other performers recorded hits before Motown moved to California in 1972.

“We didn’t even realize the impact of Motown,” said Gordy, who started the label with an $800 loan from his family. “In those early days, the unsung heroes had the courage to follow me down a road that didn’t even exist.”

Some of Motown’s greatest hits were put on display during the concert, which was taped in February.

Ciara danced onstage sporting a Rick James-like braided wig with beads during her rendition of “Give It to Me Baby.” Legend crooned while playing the piano during a cover of Gaye’s “Mercy Me” and Ne-Yo sang The Jackson 5’s “I’ll Be There.”

Ross, who was once signed to Motown as lead singer of The Supremes, brought attendees to their feet when she opened her set singing to Gordy while sitting next to him. After singing a couple of songs onstage, she returned back to Gordy and sang “My Man.”

“This is your legacy,” Ross told Gordy. “I want you to know that you have been a gift to all of us.”