When it comes to black people and others who aren’t white, the team behind the show don’t get it

No one knows what’s troubling Bonnie Carlson. One of “Big Little Lies”’ infamous “Monterey Five” – a group of affluent women trying to cover up details of their involvement in the killing of one of their husbands at a gala school fundraiser – the guilt-ridden Bonnie (Zoe Kravitz) has been withdrawn since the incident, distancing herself from friends and family. Her husband Nathan fears he is losing her. Her friend Madeline asks if she’s on drugs. Others in her circle are mystified and concerned.

But Bonnie’s mother Elizabeth, who drops in for an unexpected visit in Sunday night’s episode, bluntly offers her thoughts about what’s at the root of the problem: Bonnie is a black woman living in a white community that doesn’t appreciate or respect her.

“You’re surrounded by people who don’t get you,” Elizabeth, played by Crystal Fox, tells Bonnie. “They don’t look like you. I haven’t seen one other black person since I’ve been here. Is that why you’re here? We all know how fond you are of your walls.”

Elizabeth’s view could also be applied to the team behind “Big Little Lies.” When it comes to black people and others who aren’t white, they don’t get it.

The scene between Bonnie and her mother is one of the most surprising moments in the new season of “Big Little Lies.” While the Emmy-winning drama, headed by Reese Witherspoon, Nicole Kidman, Shailene Woodley and Laura Dern, scored mightily with both critics and audiences in its first season, some observers noted that the series, with its predominantly white cast and upper-middle-class suburban setting, conspicuously steered clear of mentioning Bonnie’s ethnicity.

Others argued that Bonnie, a yoga instructor with braids and tattoos, was often sidelined from the main action and was less defined than her white counterparts – nor was her daughter, Skye (Chloe Coleman), seen as much as their children. The only other significant person of color in Season 1 was Det. Adrienne Quinlan (Merrin Dungey), the lead investigator in the death of Perry Wright (Alexander Skarsgard), the abusive husband of Kidman’s Celeste Wright.

The near-total absence of diversity even seemed to frustrate Kravitz, who said in a Rolling Stone interview last year that she had tried to get the producers to deal with the cultural differences of the characters. “It didn’t work out,” she said in the interview. “People are scared to go there. 1 / 8But 3 / 8 if we’re making art and trying to dissect the human condition, let’s really do that.”

It’s unclear whether series creator David E. Kelley or the extensive list of executive producers, which includes Witherspoon and Kidman, are consciously responding to those critiques in Season 2. But it’s evident from the three episodes made available for review that there’s a lot more “flavor” in “Big Little Lies” this time around. In addition to Elizabeth’s comments and the beefing up of Bonnie’s story line, the supporting cast has been sprinkled with a few more performers of color.

However, while Elizabeth’s statements and a more visible minority presence may provoke a momentary jolt of appreciation from those of us who want a little more topicality with our entertainment, this shift into “wokeness” is only skin deep.

For instance, while Elizabeth makes a valid point about Bonnie being treated as an outsider, her credibility is diluted, and apparently dismissed by Bonnie, because she had – or has – a drinking problem, and may have been a less-than-ideal parent when bringing up Bonnie. (Elizabeth also has a New Age-y thing about crystals, which only creates more doubt about her judgment in the viewer’s mind.) Bonnie immediately brushes off her mother’s concerns, an indication that the show may move forward without much further exploration of the issue. And at the end of the episode, Bonnie, upset with her mother following a tense dinner, asks her to leave, though Elizabeth stays on anyway – thereby foregrounding their complicated relationship and downplaying the question of race.

Whether the latter subject will come up again remains to be seen, but for now its handling is less than satisfying. Brought up by a black character who is not a key part of the series, and is positioned by the writers as untrustworthy from the start, Bonnie’s racial dilemma, as a woman of color surrounded by whites, is given short shrift – both compared to her own guilt, and to the ambition, adultery, domestic abuse and other problems confronted by her friends and neighbors.

Season 2 also introduces the series’ first black male character, Michael Perkins (played by Mo McRae), the new second-grade teacher at Otter Bay Elementary, where the children of the Monterey Five go to school. But Perkins, who arrives on the scene with no introduction and only a few lines, is so far a one-dimensional figure whose main function is to act as a submissive target for the over-the-top parental rants of Dern’s Renata Klein.

Otter Bay Elementary also has a new Asian American vice principal – Lisa Coolidge, played by Eliza Shin. Coolidge is introduced to Madeline Mackenzie (Witherspoon) by principal Warren Nippal (P.J. Bryne) in the first episode of the season, which takes place on the first day of school. Madeline says hello, then turns her attention back to Nippal. Coolidge is barely seen in the subsequent two episodes. Meanwhile, the series finds time for Woodley’s Jane Chapman to dance by herself on the beach, and for Tori (Sarah Sokolovic), the wife of Madeline’s former lover, to show off her surgically enhanced breasts in the supermarket. 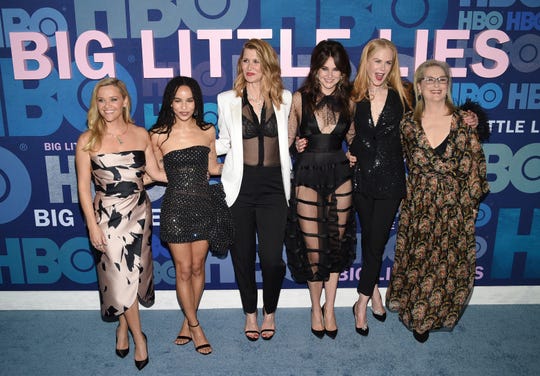 If the people running the elementary school felt that having a more diverse staff would benefit the almost-entirely-white student body, that would be an interesting sideline for the series – Perkins is likely the first black man most of the kids have ever encountered. There would be lessons learned on both sides.

Instead, the second season’s approach to race feels more like checking the boxes.

The show would have been better off leaving its head in the white sand.

Race remains one of the country’s most heated and divisive issues. Although it might be admirable for Kelley and what an HBO publicist confirmed is the all-white ranks of producers and writers on the series to inject more diversity into the proceedings, treating the issue so shallowly, without any sensitivity or understanding, is more than a misguided grab at relevance: It’s offensive.

“Big Little Lies” is not the first HBO series to have difficulty dealing with race. “Girls,” from creator Lena Dunham, was blasted in its first season for ignoring the diversity of New York City. “Game of Thrones,” too, was nearly absent people of color in leading roles – including among the main contenders for the Iron Throne. Some fans grumbled when Daenerys Targaryen freed dark-skinned slaves to help her in her quest for power.

As Zeba Blay, senior culture writer for the Huffington Post, pointed out in an essay praising Season One, “Perhaps for Kravitz, the fact that her character’s race is never acknowledged is refreshing in an industry where she was once rejected for a role in ‘Batman’ because the directors weren’t ‘going urban.’ For others, it’s a tedious color-blind approach to diversity.”

There’s no doubt that “Big Little Lies,” with its starry and attractive cast, is irresistibly watchable, and the addition of Meryl Steep this season as Perry’s quirky, grieving mother makes it must-see TV. Which is why its swing and miss at a progressive treatment of race is so disappointing: In treating its nonwhite characters’ cultural differences without insight or finesse, at least so far, the subject simply becomes a distraction.

The rest of the season may prove me wrong. But I fear I’ll feel more like Elizabeth, who tells her daughter, “Something’s in the air… and I don’t like it.”