‘The Good Place’ going out in a very good place

‘The Good Place’ going out in a very good place

Los Angeles – The cast of the NBC comedy “The Good Place” has been dealing with storylines that look at what happens after a person dies for three seasons. Those same cast members now have to ponder what happens when their television series comes to an end because the fourth and final season of “The Good Place” premieres Thursday on NBC.

Huntington Woods native Kristen Bell, who plays Eleanor Shellstrop, knew bad news was coming when she got a call from series creator Michael Schur, who told her they needed to talk. 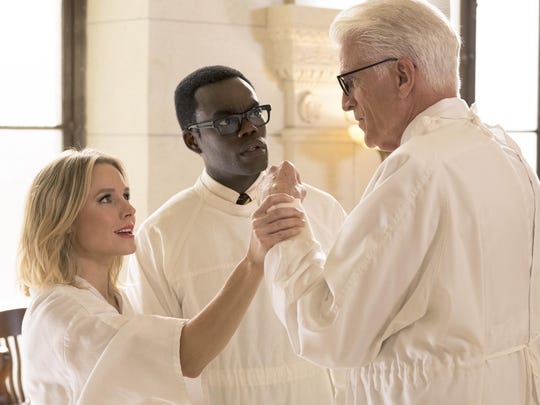 “I had a sixth sense about what he was about to say. And I said, ‘Before you say anything else, you have to promise me that you’ll write me a show after this one, and that’s the only way I’m not going to hang up on you.’ And he said, ‘Okay’,” an emotional Bell says. “He said, ‘I have done a lot of thinking about it. Haven’t made this decision haphazardly, but I have found an ending that this story needs.’

“I have always made it my mission to trust Mike, and it has never backfired.”

Bell showed her trust in Schur when she heard the initial outline of the comedy. She would play an ordinary woman whose trip to the afterlife takes her to the Good Place instead of the Bad Place because of an error. She’s determined to become a better person and earn her spot while dealing with Good Place Architect Michael (Ted Danson).

Shellstrop and her three Good Place companions — Chidi (William Jackson Harper), Tahani Al-Jamil (Jameela Jamil) and Jason Mendoza (Manny Jacinto) — spent three seasons learning the afterlife is full of tricks, confusion, sacrifice and breakdowns where what is good and what is bad may not be what it seems. The offbeat series won the AFI Award for Program of the Year, TCA Award for Program of the Year, Humanitas Award and Peabody Award. It was nominated for a Best Comedy Series Emmy this year.

Danson — who won a Critics’ Choice Award and was nominated for two Emmy Awards for his work on the show — admits to being a little surprised by the cancellation but is happy that the series will end taking the same approach of telling the kind of wild and wonderful tales that were the hallmark from the first day.

The writing hasn’t been the only difference with “The Good Place.” Unlike most network comedies that produce 22-24 episodes a season, there were only 13 episodes produced in the first three seasons. There will be 14 episodes in the final season.

Schur was always happy with the smaller number of episodes because when he pitched the series, the main thing he wanted to do was move fast with the stories and the characters.

“I remember thinking if I’m going to execute this show the way that I think it should be executed, it wouldn’t be a 22-episode, 24-episode-a-year show. It isn’t like we knew that in the seventh episode of the first season Eleanor was going to confess and blow up the entire premise that we started with,” Schur says. “You can’t do things like that and stick to them if you are doing what network TV shows have traditionally done, which is try to stick around as long as possible.

“I think it was exactly the right number of episodes per season. I think it ended up being the right number of seasons. We got exactly the story that we wanted to tell in under the wire, and I’m very grateful to both the studio and the network that every time I sort of pitched an aspect of the show that was counterintuitive or nontraditional or whatever you want to call it, they rolled with it every time, and it really, I think, made the difference.”

Calling the series “The Good Place” would suggest the show would deal heavily with religion. Schur’s intention was to examine what it meant to be a good person and he found through the cast, crew and writers that was a more complicated question than he imagined.

His original idea changed when he realized he was trying to tackle questions about what is good and what is evil that have been argued and debated for thousands of years. The mission then became to give the audience a variety of options.

“Everybody fails all the time, even people with the best of intentions will fail, and it doesn’t matter whether you follow this theory or that theory or this belief or whatever. You’re going to fail a lot. We all fail all the time at this. At the end, I think I would describe this as a show that makes the argument that we all ought to try harder than we are. And as long as you’re trying, you’re on the right path.”

Even when a cast, crew and writers all give their best efforts, that doesn’t mean success every time, leaving those involved with this comedy now looking for their next “Good Place.”