This past January, though, when the Detroit native found himself in Brooklyn battling other comedians and reality show stars to see who could make the best restaurant-quality dishes while filming "Worst Cooks in America: Celebrity Edition," he realized he may have overestimated his skills. 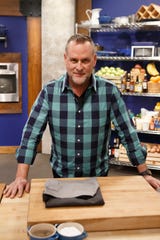 The cooking competition show premiers Sunday on Food Network. Each of the seven celebrities are playing for a chance to win $25,000 for a charity of their choice. Coulier, who recently moved back to Michigan, described it as a boot camp-style show for a high-end restaurant where the tasks were tough and expectations high.

"I thought I knew how to cook going in there and I realized I didn’t even know how to hold the knife properly," he said. While he did get to goof around with fellow comedians on the show, Brian Posehn and Bridget Everett, he said the days were long and "exhausting."

"I learned how to chop and cook and dice and how to do everything ... they wanted to turn us into professional chefs," said Coulier, who chose Children's Hospital of Michigan as his charity. "They wanted to make our dishes into restaurant quality – if I went to a five-star restaurant, would I be eating this? That’s the kind of caliber they wanted to bring us up to."

He said the show, which is hosted by world-renowned chefs and Food Network personalities Anne Burrell and Tyler Florence, had the celebrities learning to make sauces from scratch and they even butchered a cow.

"It was really intense. It was wild, it was funny, it was crazy at times but exhausting," he said.

Next month the second half of the fifth and final season for "Fuller House" premieres on Netflix. Along with his "Full House" co-stars John Stamos and Bob Saget, Coulier had a reoccurring role as Uncle Joey Gladstone on the reboot.

"It was bittersweet because we are a huge hit for Netflix but their programming is 'look, we don't care who you are, you do five seasons and that's it,'" he said. "That's their business model. I'm not going to argue with how successful Netflix is but that's the way it goes when you are doing television in 2020."

He said a lot has changed from being a television star in the 1990s versus today on streaming services, but other things like the live audience remained the same. Promotion is much different, for example, with stars encouraged to hype their show on social media.

He said it was Stamos and Saget who encouraged him to dive into social media, which Coulier says he enjoys because he gets to connect with fans.

"They said you gotta get on the social media platforms and I said 'nah, I don't' ... but then once I got into it I realized, that's your audience. I noticed that some (celebrities) are really slaves to their audience, they have to post something every day and I'm like 'why?' In the world of fomo and social media, I guess that instant response is kind of a drug."

While he has a million followers on Instagram, Coulier only follows less than 100 accounts himself, many Michigan-centric like the Detroit Red Wings, Uncle Kracker and Jack White

"I'm a big Jack White fan and both of us being from Michigan I was like 'I want to play harmonica on one of your songs, buddy,'" he said. "I'm a big fan, I think he's a musical genius."

In February Coulier posted a photo of him with co-star Candace Cameron Bure dining at  Midtown restaurant SheWolf Pastificio and Bar. Coulier called the popular Italian spot "outstanding," adding that he also likes the Apparatus Room in the Detroit Foundation Hotel. He said he took Bure there because she and her husband appreciate good food and the women on the "Fuller House" call themselves "she wolves."

Working from home on the lake

Recently life has slowed down a bit for Coulier because of the stay-at-home order, but he's remained very busy. He and his wife have been working on their new home on Lake St. Clair, remodeling the property themselves.

"We love it," he said about living back in Michigan. "I wish I could have done it a long time ago, but things being as they were I had to be in California working."

He said in addition to the remodeling, his wife Melissa Coulier, a photographer, is working on a book featuring children during the COVID-19 crisis. He's been putting energy into his new project with InventTV, which produces television series.

"They've brought me in to start a new family entertainment division for the company, so I've been working on that, so it's been a lot of Zoom meetings," he said.

They'll start shooting in the Detroit area soon for his first show that he created and will star on for InventTV, "Uncle Dave's Laugh Emporium." He said if they sell the show to a network or platform he hopes to be able to continue to shoot locally. "Uncle Dave" is set to feature young Michigan child actor Penelope LeMieux, who Coulier says is "unbelievable."

"This kid could be a huge star," he said, adding that the show is a "forum for kids to talk about issues that they have."

"There's a lot of illustration and animation in the show ... we're trying to shoot around all this Covid stuff, so a lot of it will be Zooms and shot on phones ... it's a really unique concept, kind of like Mr. Rodgers meets Pee Wee's Playhouse."

Sounds like a perfect fit for America's Uncle Joey.