There are few highs in contemporary American musical theater greater than appearing in the smash hit "Hamilton." The Detroit News caught up last week with two of the lucky actors in the show's touring company -- Josh Tower, who plays the key role of Aaron Burr, and Dan Belnavis, a U-Mich graduate who's in the ensemble as well as understudy for several parts, including George Washington.

How long have you been with the tour?

Aaron Burr is almost as big a character in the play as Alexander Hamilton. How much rehearsal time did you get?

So where are you now?

We're in Cincinnati. Then we come to Detroit.

How old are you?

I always say I'm in my first life. I haven't been reincarnated yet.

I love it. It was a difficult part to learn, and then I had to add dance to someone -- me -- who didn't dance.

But I love the character. I don't perceive him as the villain. He's an antagonist, but both he and Hamilton have their pitfalls and shortcomings. Burr's a fairly simple guy who holds his cards close to his chest, and lets the volcano blow every now and then.

You were in the original workshops that developed "Hamilton" before it opened  in 2015 at New York's Public Theater. Did you know it would be this huge?

I was already a fan of "In the Heights" and other stuff (playwright) Lin-Manuel Miranda had done. So I knew going in that this had a little head of steam, but didn't know it was going to be the phenomenon it is. Remember, Tupac Shakur's rap musical, "Holler If Ya Hear Me" crashed and burned miserably.

Why do you think "Hamilton's" been such a hit?

When I'm on stage, I think we reflect the best parts of the United States. The show is very timely, and talks about America and American history in a way people can click into.

What are your favorite songs that Burr has?

The two songs where he momentarily lets the mask down -- "Wait for It" and "Dear Theodosia."

Do you know Lin-Manuel Miranda?

Yes, I met him through the workshops, and we're neighbors in (Manhattan's) Washington Heights. Lin, despite his newfound celebrity, is a really good man and father and community member. And he always says "Hi." 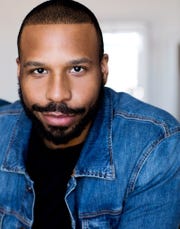 So you're a U-Mich grad?

I loved it. Michigan was my dream school. I was shocked when I got in -- it's one of the top, if not the top, musical-theater programs in the country. I auditioned as a high-school senior for 11 programs, and Michigan was my first choice. It was a dream come true.

Where do you live?

I don't live anywhere. I was living in Park Slope, Brooklyn, but gave up my apartment when I got the part in the tour. I stay with friends when I go back, or my parents in New Jersey.

How old are you?

So you're in the ensemble, and also an understudy?

Yes. I understudy George Washington, King George, and Hercules Mulligan and James Madison -- those two are played by the same actor. I've probably gone on as the king eight or nine times, and have done Washington quite a bit, as well as Mulligan/Madison. As a matter of fact, I'm doing them tonight.

Do you die of heat in King George's outfit and cape?

For me, the problem is that both are just heavy. I'm also 6'2", and the king has these beautiful shoes with heels that add a couple inches. So I have to duck down when I'm walking on stage so I don't hit part of the set and knock the crown off. I've come close a couple times and learned my lesson.

What's it like being in such a cultural phenomenon?

I joined the national tour right at the beginning. I'd like to say that two years in it's no big deal, but it still is. It's really humbling. I think about the high-school me who just wanted to be doing musical theater professionally. I never thought I'd be in one of the biggest musicals in the world.