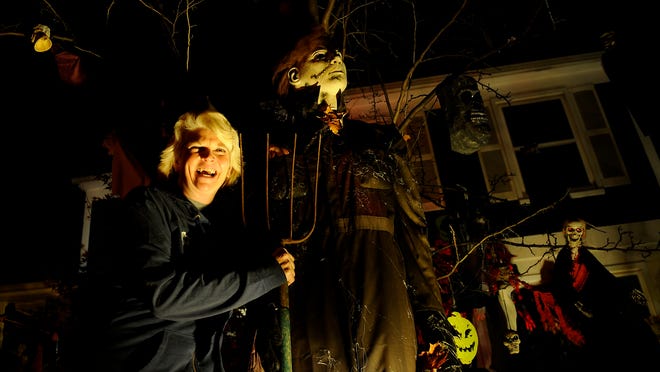 Call it the fright factor.

Halloween is lurking just around the corner and, for some Metro Detroiters, a few carved pumpkins, inflatables or witches simply won't do. They pull out all the stops to maximize when it comes to creating spooktacular displays.

From hand-built crypts to mannequins transformed into Hollywood villains, many local home Halloween displays offer thrills, chills and a harrowing helping of creativity. These aren't just displays; they're productions.

"Ever since I was a little kid, it's always been sort of a magical time for me," says Forde Sanders of Bloomfield Hills, who creates a haunted cemetery with hand-painted crypts and coffins each year in his front yard.

And Halloween is big business these days. According to the National Retail Federation, more than $7 billion will be spent on Halloween decor, costumes and candy this year. The average person will spend $77.52 this year, up from $75.03 last year.

We scoped out some of the best local home Halloween displays — from entire blocks to single homes — and below are some of the most spooktacular. This list certainly doesn't include everyone, but it's a start. Let the fright fest begin!

south of 32 Mile and west of Main Street

Fear factor: Visitors come from miles away to check out Tillson Street's elaborate Halloween displays, which include more than a dozen homes completely decked out. And we're not talking just a few pumpkins and witches. There are graveyards, pirate ships (plural), a haunted inn, castle, even a masquerade ball. Tillson Street even has its own Facebook page: Halloween on Tillson Street. To see it at its best, don't drive — walk the two tenths of a mile, says neighbor Roberta Socia. "The sidewalks are packed with people blocking your view. It really needs to be walked or you'll sit in gridlock," Socia says. The entire street is Halloween tsunami for the senses with lights, sounds and awesome displays. But be prepared for crowds; visitors are asked to bring a canned good Saturday to go to the Samaritan House.

Location: South of 696, west of Woodward

Fear factor: Jennifer Litomisky is obsessed with Hollywood horror movies — and it shows. Her yard is filled with surprisingly accurate mannequin re-creations of some of Hollywood's scariest characters: Michael Myers from "Halloween," Hannibal Lecter (complete with the face restraint) from "Silence of the Lambs," Jigsaw from "Saw" and Jason from "Friday the 13th." Even everyone's favorite chemistry-teacher-turned-meth-dealer Walter White from "Breaking Bad" makes an appearance in his biohazard suit. Litomisky says she started decorating her lawn "full tilt" 14 years ago, starting with Myers. "I try to add someone new every year," says Litomisky, executive director of the Ronald McDonald House. "... I am a horror-movie afficionado." Nearly every square inch of Litomisky's yard is covered with mannequins, skeletons, coffins and gravestones. And Litomisky is already thinking about next year. "I hope to have something new from the original 'Shining' movie in 2015," she says.

Fear factor: Graphic designer Forde Sanders uses everything from recycled foam insulation to clothes from the Salvation Army to create his haunted forgotten cemetery on his front lawn. There are two crypts, each faux painted by Sanders himself. One crypt wall came from a Fiat ad he worked on for Chrysler. He even bought a massager this year from a local Salvation Army to make one of his zombies interactive when visitors trip a nearby light. "I like to try to make everything sort of creepy," says Sanders, who starts working on his display in August. The father of three also relies on his kids to critique the display, evaluating his zombies for size and proportion.

Fear factor: Massive black spiders climb the walls of Mark and Denise Van Sile's Grosse Pointe Farms colonial, where the lawn is a mix of zombies, skeletons and goblins (including Elvis and the Grim Reaper). Even Dr. McScreamy, a skeleton in surgical scrubs, makes an appearance. Mark and Denise have been decorating all-out for Halloween and Christmas since 1995. Mark, who is in real estate, says he looks year-round all over the country for new items. The huge spiders, for example, are from a supplier in Ohio. But if he adds something new, he takes something else out. "If you put too much in, it starts getting crowded and junky," says Mark. Illuminating it all are tall shrubs ensconced in orange lights. In the driveway, a pick-up truck is part of the display with skeleton hoisted in the bed.