Feighan: Stepping into my past with Irish step dancing

Dance style is technical and athletic, yet buoyant – and we were hooked

Feighan: Stepping into my past with Irish step dancing 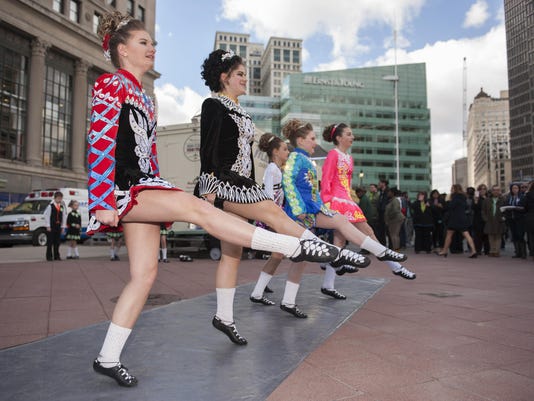 The first time I met another Maureen, she was wearing what looked like black ballet shoes, except they had laces so long they could’ve easily been used as a tourniquet in the case of an emergency.

My Irish Catholic father took my family to a small, worn club on Detroit’s northeast side called the Friendly Sons of St. Patrick. There, we saw a small group of Irish dancers — mostly girls with some boys — kick, jump and click their heels as they performed jigs, reels and treble jigs, all while keeping their arms tightly at their sides.

The dancing was technical and athletic, yet buoyant. My older sister and I — 12 and 10 at the time — were hooked. We soon started taking lessons from a man named Michael O’Hare.

O’Hare, co-owner of the Flanagan-O’Hare School of Irish Dance with his wife, Elaine Flanagan-O’Hare, also a certified Irish step dancing teacher, says he never intended to start a dance school. O’Hare, who grew up in Southfield, was just 18 when he took over teaching his sisters’ students while she was on maternity leave. Some students were only two years younger than him.

“I went to school for criminal justice,” says O’Hare with a laugh. “I was going to school, working part-time jobs and teaching.”

I have fond memories of going to the Friendly Sons every Saturday. My mom clipped coupons while O’Hare taught us reels, slips jigs, treble jigs and hornpipes. At the time, few people even knew what Irish step dancing was.

“When I was a kid, I had to tell people it’s like a combination of ballet, tap dance and clogging,” O’Hare, now 52, remembers.

Theories abound for why Irish dancers keep their arms at their sides. One is that before Ireland became an independent nation, cultural activities in Ireland were forbidden by the British.

“So they had to do it discreetly,” O’Hare says. “They would do it in their houses where the British soldiers couldn’t see them and would do it (dance) from the waist down.”

But in the 1990s, a cultural phenomenon hit so intensely no one needed to explain Irish dancing anymore. It was called “Riverdance.” “It was a huge turning point,” says O’Hare.

His phone rang off the hook with interested students. At one point, he and his wife had 600 students with schools in Birmingham and Naples, Florida. The couple performed with brother Tim O’Hare, also a renowned Irish dancer, at a White House St. Patrick’s Day event for then-President Bill Clinton.

“It was such a whirlwind,” says O’Hare, who has had students go on to join “Riverdance.” “The studio was just booming.”

But then 9/11 hit, and later the economic downturn. They closed the Florida Naples location. Enrollment plummeted by 70 percent in the 2000s.

Still, 34 years after he started, O’Hare, who now has two sons, one of whom takes lessons from his parents, continues to teach. And Irish dancing — even after “Riverdance” founder Michael Flatley danced his last show Thursday, though he says he’ll continue to produce — is growing in popularity again. Three years ago, O’Hare and his wife reopened their Naples school. On Thursday, the school’s Detroit-area dancers planned six shows, including one at Campus Martius.

Irish dancing for my family, meanwhile, has come full circle. My 5-year-old niece takes lessons from O’Hare. Watching her at rehearsal earlier this week, she practiced jigs and reels I once did 30 years ago.

Irish step dancing has connected me to my roots in a way few things have. I’ve met families and learned traditions I didn’t know before. I found many other Maureens. And for a style of dance once so forbidden dancers couldn’t move their arms, it’s now proudly performed in public. And for that, I’m grateful.