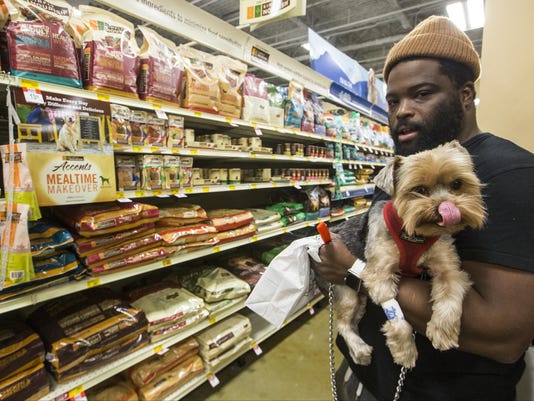 Tron Oliver holds his York terrier Rocket after filling a veterinarian prescription at the PetSmart Midtown store in Los Angeles. Americans spent just over $60 billion on their pets in 2015, a record fueled by a big jump in what owners shelled out for services like grooming, boarding and training.(Photo: Damian Dovarganes / AP)

Los Angeles — Americans spent just over $60 billion on their pets last year, a record fueled by a big jump in what owners shelled out for services like grooming, boarding and training.

Those groups in particular often look to others to keep their pets exercised and looking and feeling good. They also tend to hire pet-sitters and use boarding services.

Americans spent $5.4 billion on such pet services last year, up nearly 12 percent from 2014, according to the association’s annual report released Thursday at the Global Pet Expo trade show in Florida. Here are some of its other findings:

By having others care for their pets, are owners not showing as much love as they used to?

“No, no, no,” Vetere said. “I don’t see this as a way people are trying to farm out their love for a pet. I think it’s a way of increasing exposure to loving people.”

The spike in service spending is expected to moderate in 2016, but still increase nearly 6 percent, more than any other area of pet spending.

The proliferation of reality TV shows featuring veterinarians like “The Incredible Dr. Pol” and “Dr. Oakley, Yukon Vet” have focused more attention on the profession.

But the spending report found people are turning more to pharmacies, pet stores and food supplement stores for products to increase their animals’ health and longevity.

Medications are being refined and mass marketed, increasing their quality and availability.

“If a pet is sick or injured, today’s owner will run to the vet, but routine visits to the vet are down,” Vetere said.

Americans are spending more to take care of their pets, but they aren’t buying as many pets to begin with.

People in the U.S. spent about $2.1 billion on animals last year, down 1.4 percent from 2014. It was the second year in row that sales fell, and a third dip is expected in 2016, though the decline should moderate.

Reasons for the drop: Pets are living longer. The oldest baby boomers are reaching 70 and not replacing their animal companions.

Also, a growing number of cities across the country have banned the sale of dogs in pet stores in efforts to put puppy mills out of business.