Busted fills a need as Detroit’s only bra boutique

Lee Padgett opened the bra shop in 2013 with four styles. She now offers thousands of bras that fit women size AA to O

Busted fills a need as Detroit’s only bra boutique

Lee Padgett opened the bra shop in 2013 with four styles. She now offers thousands of bras that fit women size AA to O.

Vanessa Redmond emerged from fitting room No. 2 to a chorus of “oooohs,” “girrrrrl” and “What a difference a bra can make!”

“I have always tried to have the best bras, and this feels wonderful!” the beaming 62-year-old Detroiter told 20 ladies nibbling strawberries and sipping white wine among racks of lingerie.

The members of the diabetes prevention program Change Your Lifestyle Change Your Life were getting fitted for new bras during a private party at Busted Bra Shop in Detroit. The pre-diabetic women are fighting the disease by eating healthy, exercising and losing weight. But they didn’t need scales to weigh their success — they knew from the fact their bras no longer fit.

Redmond, for one, had lost 23 pounds since July.

“It perks everything up!” she says, tugging her sweater neck to give a glimpse of the navy blue satin bra. “I’m just really shocked, because I’ve spent good change on my bras and always thought I had the best. But I have lost (weight), so it would make a difference.”

Paula Green-Smith, CEO of the nonprofit Urban Health Resource that sponsors the group, has taken groups of pre-diabetic women to the bra shop tucked in the Park Shelton each year since it opened in 2013. Getting fitted for new bras is necessary after losing weight, she says, but it also motivates women who discover they’re a size or two smaller.

“Coming here to get the proper undergarments helps them recognize their success,” she says. “Then other people compliment them, uplift them and encourage them to keep going.”

For Busted owner Lee Padgett, nothing makes her happier than seeing the smiles — or tears — on women’s faces when their “girls” are placed in the right bra during a fitting or party for bachelorettes, church groups and sororities.

“People start crying in our dressing rooms because they’re so happy, and we’re not putting you in something that looks like you’re 80 years old,” Padgett says. “And even if you are 80, you feel like your breasts are up and feel better.”

The 47-year-old redhead with a sense of humor wasn’t always a bra expert. Padgett moved to Detroit in 2001 when her husband, Patrick, joined Ford Motor Co. The Mobile, Alabama, native felt enamored with the city from day one.

“There’s a weird kind of energy here that sucks you in and makes you feel at home,” she says.

Two years later, the couple opened Cafe de Troit on Library Street, where Padgett got to know Detroiters on a very personal level.

“People would come in and complain about the fact that they couldn’t get underwear and bras, and neither could I,” she recalls. “I didn’t have time to drive round-trip an hour and a half to go shopping for something pretty basic. But you can get anything for men downtown, and it really made me mad.”

In 2005, her landlord lost the building, and she was forced to close the cafe. She and Patrick moved to Germany, then North Carolina, where Padgett worked in a third-generation bra shop. One morning, she woke up with an epiphany: She should open a bra shop in Detroit.

“We came back with blind ambition,” she says.

Padgett applied for the Hatch Detroit contest that grants $50,000 for a brick-and-mortar store. She didn’t win. But it didn’t matter.

“I was like, ‘You guys can all kiss my a** because I know women need these things,’ ” she says, emphasizing women shouldn’t have to drive to the suburbs just to buy a bra. “I was fueled by anger.”

In December 2013, she opened in a tiny Park Shelton office, selling four styles. She poured profits into more bras and convinced the landlord to turn a 1,400-square-foot storage room into what’s now her shop.

Today, she carries 45 brands and thousands of bras in 220 sizes. Bands range from 26 to 56; cups span AA to O, and P is coming. Her mission is to fit every woman, whether she knows her bust size or not.

“People say, ‘There’s no way Barbie exists in nature,’ ” Padgett says. “Oh yes she does! She’s just unfortunately in double D’s when she should be double G’s.” 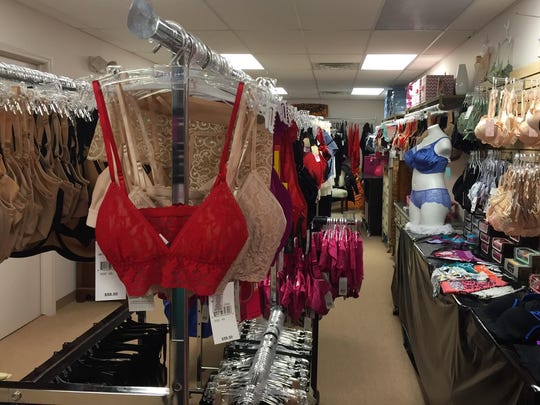 Busted Bra Shop carries 45 brands in 220 sizes — from AA to O — and has thousands of bras available for shoppers. (Photo: Photos by Stephanie Steinberg / The Detroit News)

Plus sizes to pregnancy

Meandering through her shop one morning, Padgett shows off specialty bras that fit plus-size women, pregnant women and women who’ve had mastectomies. She stops at a mannequin wearing her most popular bra, a bright red Keira by Goddess.

Next to a pink “house of nine” — a sign for a dress shop that faced her cafe, which a customer rescued before the building was razed — is her Nubian Skin line featuring hosiery, bras and underwear in four shades for women of color.

“We were the first company in the country to carry Nubian Skin,” Padgett says. “The maker is of Nigerian descent. She was a ballerina and would have to wear nude on stage, but nude in the ballerina world is beige and pink, so she had to dye things.”

She turns to another mannequin sporting a couture black Marlies Dekkers.

“I’m wearing one myself,” Padgett shares. “I love that bra — it’s one of my most comfortable.”

She points to other accessories — Secret Stash money holders that attach to bras, GirlyGoGarters that hold cellphones or insulin pumps, Kix’ies thigh highs guaranteed to stay up on a 260-pound woman. There’s something for everyone.

“Our main goal is to take care of women as much as we can,” she says, adding, “If you’re not born a woman and want to wear women’s products, we’ll take care of you in a respectful, polite way.”

The 10 Busted staffers will help men seeking something for their ladies, too. Though, unless their significant other has a card on file with her size, they’ll steer guys toward gift certificates.

“We don’t recommend they buy a bra just going, ‘Well, she’s kind of this big,’ ” Padgett says, deepening her voice and spreading her hands in front of her breasts.

For that reason, Busted is offering a $100 gift card for $80 through Valentine’s Day — “just to encourage men not to buy something that makes them unpopular in the household,” Padgett laughs.

Busted Bra Shop was the first retailer in the United States to carry Nubian Skin, a line of bras, hosiery and underwear that comes in four shades and is intended for women of color. (Photo: Stephanie Steinberg / The Detroit News)

Frederika Zappe, an Eveden national fit specialist known as “Freddy,” has trained Padgett’s staff at her Fit School at the CurveNewYork expo, which Padgett attended in 2013.

“I fell in love with her passion and ideas,” says Zappe, who’s fitted women for decades.

Zappe has visited Busted a few times. She’s not from Detroit, but says the shop — claimed to be the only bra boutique in the city — fills “a big need,” especially for plus-size women.

“Detroit is a mecca for ladies who are fuller busted, full figured. The Midwest is kind of like that, perhaps more than other parts of the country,” Zappe says. “Lee is fantastic at knowing what her customers’ needs are.”

Padgett promises she can “take care” of large breasts — even those that struggle in strapless.

Meggan Ellis, a Wayne State University senior, walked in the shop last month with a red dress draped in her arms. The 21-year-old opera singer needed a strapless bra for her recital and had luck at Busted before.

“They’re really consciousness of listening to what you want and not just selling you their newest or most expensive thing,” Ellis says. “They really do their best to make sure you leave happy.”

Using an Urban Science study, Padgett found most customers hail from Grosse Pointe, Indian Village and West Village. As a result, she plans to open a second shop at 8016 Kercheval in the West Village this summer. (Busted currently has a pop-up shop on Agnes.)

Padgett says customers will get the same “one-on-one experience” and sizes they won’t find at Victoria’s Secret. And given research shows most women are wearing the wrong bra size, she aims to bust that.