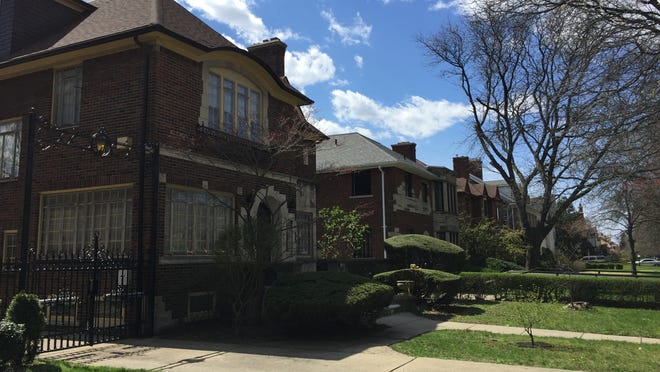 Sifting through a stack of old photos on a table in her living room, Michelle May finds a picture of her great-aunt, Viola Spraggins’ wedding, taken just feet away in front of the fireplace. Nearby is a picture of her great grandparents holding hands in front of the same fireplace, and a more recent photo of May and her husband cutting their wedding cake in the nearby dining room.

The faces change in the photos, but a constant remains: the family’s home in Detroit’s Boston-Edison neighborhood.

Bought in the early 1950s by Spraggins and her sister, Mary Spraggins, May’s great grandmother, she’d always dreamed of “having a house on the boulevard.” Today the home belongs to May and her siblings. May lives there with her husband, mom and brother.

“My great aunt (Viola) tells the story that one day she was walking down the street. She’d finished doing hair at the beauty shop and she was walking down the street,” said May, unfolding the land contract that secured the house for $21,000 in 1952. “In the window, it said ‘For Sale.’ She went to my great grandmother and said, ‘Maybe now is the time.’ ”

Today, the house is one of many — roughly 900 in fact, the bulk built between 1905 and 1925 — that make up the Historic Boston-Edison District, once home to some of the city’s biggest names, including Henry Ford, the Fisher brothers and heavyweight boxer Joe Louis.

The neighborhood, like Detroit, has endured many ups and downs over the decades, from the 1967 riots to the building the Lodge Freeway. But later this month, Boston-Edison celebrates a big milestone: the 90th anniversary of its neighborhood association, the longest continuous association in Detroit. An anniversary gala is planned for 6:30 p.m. Friday at the Fellowship Banquet Hall and Conference Center, 7707 W. Outer Drive.

The association, incorporated after the neighborhood came together, has played a key role in keeping the Boston-Edison together, not just from a social standpoint, but also fighting zoning violations (even going to court if necessary).

“This has always been a wonderful neighborly neighborhood,” said Jerald Mitchell, Boston-Edison’s historian and archivist who has lived with his wife, Marilyn, in Boston-Edison since 1972.

“We’ve had a lot of block clubs, a lot social events. And part of that goes back to the existence of a strong neighborhood association. They’ve always had a board, and it’s been very active in terms of enforcing ordinances and creating a lot of social value to living here.”

The association regularly sponsors events such as an Easter egg hunt, picnics in the park, an annual attic sale, and one its most popular, its holiday home tour, which just marked its 42nd year.

“It’s a way for neighbors to come together, work on projects and build relationships,” Mitchell said.

And those relationships are what make Boston-Edison what it is, residents said.

Boston-Edison consists of a 36-block area bordered by Boston Boulevard to the north, Edison Avenue on the south, Woodward Avenue on the east and Linwood on the west. It was designated as a national, state and local historic district in 1974.

The district is actually a compilation of three subdivisions. The first was built in 1904 by Edward Voigt, a German immigrant who was one of the founders of the Edison Illuminating Company of Detroit (which hired Henry Ford).

At the time, “Grand Boulevard was the edge of town and so beyond was undeveloped,” Mitchell said. Voigt “saw the oppourtnities and began to acquire land early on.”

The second and third sudivisions were the Boston-Boulevard subdivison, built in 1913 by John Newberry, and the Joy Farms subdivision, built by Henry B. Joy.

Henry Ford was one of the area’s most prominent early residents. He and his wife, Clara, lived in an Italian Renaissance house on Edison Street from 1908 to 1915 before moving to their Fair Lane estate in Dearborn. Above the garage is a machine shop they built for their son, Edsel.

Today, Jerald, the archivist, and his wife, Marilyn, live in the house, which they’ve gradually renovated over the years, restoring walls and paint. It was operating as a church when they bought it.

Restoring such a large, prominent house “is like eating an elephant one small piece at a time,” joked Jerald.

One element that set Boston-Edison apart from other prominent Detroit neighborhoods when it was built is that it didn’t have restrictive religious or racial covenants in place. It had a large prominent Jewish community, including clothing store founder Benjamin Siegel.

At the time, religious covenants were pretty common, Mitchell said.

“It could be on individual houses or entire developments,” he said. “It was countrywide.”

That large Jewish community likely played a key role in the smooth integration of Boston-Edison in the 1940s. May, whose great-aunt and great-grandmother bought their home from a Jewish family, says Jews were more likely to sell their homes to African-Americans.

“Racial integration here was really very smooth,” said Marilyn Mitchell, who did oral histories about integration in the neighborhood. “It wasn’t a totally WASP neighborhood ... and the African-Americans who moved here were professionals. There wasn’t a class distinction.”

May, who spent the bulk of her childhood in her great-grandmother and great-aunt’s home after her parents divorced, remembered the day her father told her Motown Records founder Berry Gordy Jr. lived just a few blocks away. Obsessed with Michael Jackson of the Jackson Five in the 1970s, May remembers asking her grandmother if a family friend who worked for Motown could teach her to play the flute. She thought it was her way to meet Jackson.

“I was like, ‘I’m going to marry Michael Jackson!’ ” said May, an accomplished violinist, “... and that’s how I started playing flute.”

May remembered when the ’67 riots erupted and she saw young men running down the street. Her grandmother scolded her not to open the curtains.

May eventually graduated from Marygrove College and has never left Boston-Edison. As much as she wanted to at times, the timing was never right.

“I was just destined to be here,” said May, now a counselor at Oakland Community College. “And it really was the best thing for me.”

Still, the neighborhood faces its challenges — abandoned and neglected homes —and May worries about gentrification as younger residents move in.

“These houses are relatively easy to get. It’s the keeping; the upkeep,” said May, pointing to water damage in her own living room. “We’ve got challenges here. We just have to do what we can.”

“For years, people didn’t know who (Boston-Edison) was,” May recalled. “I said, ‘I live in Boston-Edison and they’d say ‘Where’s that?’ Now I say it and they say, ‘Oh!’ ” Suddenly I’m not having to say it anymore. ... What keeps me here is the community.”

¦Tickets are $65, which covers dinner, wine and entertainment by pianist Charles Green and Grammy-nominated group Straight Ahead.

¦A silent auction will include a stay at the MGM Grand.