What to do for kids locked in hot cars

Officials encourage people to call 911, then break a window and get the child out of the car as soon as possible

What to do for kids locked in hot cars 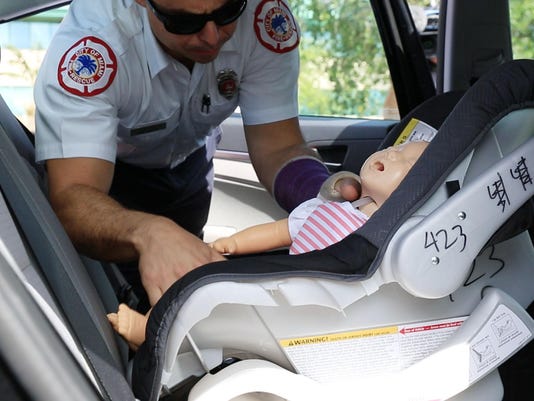 A Miami Fire Rescue member removes a test dummy used for a rescue demonstration on the methods to save the life of an infant or pet in case of emergency in Doral, Florida.(Photo: Sebastian Ballestas / TNS)

But for the baby left inside a black sedan, with the windows up, it was way worse.

Experts say the interior of the car reached a lethal 122 degrees by the time rescue personnel got to the infant, pulling the baby from his car seat and rushing him into their fire truck.

In the end, the kid was fine. He was a doll. This was only a demonstration.

But if real children had been locked inside a car for that long, said Florida Highway Patrol Trooper Joe Sanchez, they wouldn’t have survived.

The consequences, all too often, are tragic.

Already in 2017, two Florida children, including a 1-year-old boy in Pinecrest, have died as a result of hot car-related tragedies.

Back in February, Sammy Schnall was left inside a Toyota Camry for more than an hour during the hottest part of an 82-degree day in Miami-Dade.

Authorities at the time said a family member was watching the child and apparently forgot he was in the car. Schnall was rushed to the hospital in critical condition. He died at Baptist Hospital in Kendall a day later.

This sort of tragedy happens almost weekly. On average, 37 children die from heat stroke after being left inside sweltering vehicles each year in the United States. Twelve have died this year alone.

In Texas, Cynthia Marie Randolph, a 24-year-old mother of a 2-year-old daughter and 16-month-old son, was being held Saturday on two counts of causing serious bodily injury to a child after telling investigators she left them in a hot car where they died last month to teach the girl a lesson.

The Texas case is unusual, because more than half of cases are accidental, according to KidsAndCars.org, an advocacy group that educates the public on the dangers associated with children being left alone in or around motor vehicles.

. The interior of cars left in the hot sun can reach 125 degrees in just minutes, even if the windows are cracked (which has no affect on the heating process).

“Sometimes, we get tied up in our usual routines, and anytime we get out of usual routine, that’s when accidents can happen.” said Gilda Ferradaz, the Department of Children and Family’s Southern Region managing director.

“The natural response for parents is to say this cannot happen to them,” added DCF community development administrator Silvia Beebe.

Even the most diligent parents can forget their kid are with them, particularly new moms and dads who are overtired. Since 1990, there have been 793 documented vehicular heat stroke deaths in the United States, including 49 in 2010 alone.

Accidents happen at and away from home. Ignatius Carroll, a captain with Miami Fire Rescue, told of a child who died while playing hide-and-seek in the family car.

Heat stroke can occur when body temperature rises to 104 degrees; medics have found children whose bodies have reached 107 degrees.

Children overheat three to five times faster than adults and have died from heat stroke in temperatures as low as 60 degrees.

That’s why officials encourage anyone who sees a child in a potentially life-threatening situation to act — call 911, and then break a window and get the kid out of the car as soon as possible. The law protects Good Samaritans from civil liability in such situations.

Dogs have been victims, too. More than a dozen police K-9s died last year as a result of being left in hot cars.