‘It’s a wild ride’: Online DNA search leads woman to 15 half-siblings she never knew she had

The American Society for Reproductive Medicine doesn’t set a specific limit on the number children an individual sperm donor should be allowed to produce.

‘It’s a wild ride’: Online DNA search leads woman to 15 half-siblings she never knew she had 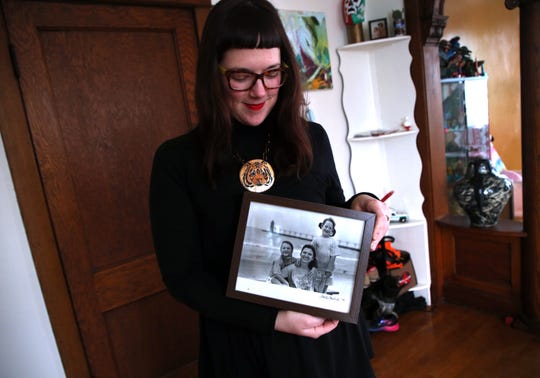 Morgan Richardson is seen at home in Chicago on Tuesday, Jan. 29, 2019, with a photo of herself with her twin sister Lauren, left, and mother Deborah. Richardson, who was conceived via In Vitro Fertilization (IVF), submitted a DNA sample to the DNA testing company 23andMe to find out about her ancestry. Almost immediately, she started discovering half-siblings from across the U.S., all from the same anonymous sperm donor her mom used. (Terrence Antonio James/Chicago Tribune)  (Photo: Terrence Antonio James, TNS)

Morgan Richardson was out on a walk one evening when she got a cellphone notification: The DNA testing website she was using had found a new relative.

Richardson stopped on the street to check the details, and that’s how she discovered, at age 31, that she had a half-sibling she’d never seen or heard of before.

“It’s exciting, but it is a little bit jarring,” said Richardson, who was conceived via a sperm donor and has found 15 half-siblings in the past four years.

“I always wonder, ‘What do they do?’ ‘Where do they live?’ ‘What are they like?’ ‘What’s their experience as a donor-offspring child?’”

Richardson, a multimedia artist who lives in Chicago’s Pilsen neighborhood, was mostly curious about her donor and her ancestors’ countries of origin when she started her DNA search. But 23andMe quickly found a half-sibling, launching her on a journey that’s increasingly common in the age of consumer DNA testing.

At the nonprofit Donor Sibling Registry, director Wendy Kramer said she and her son Ryan, who was conceived via a sperm donor, learned of two half-siblings in January, bringing the total number of half-siblings they know about to 17.

“It’s a wild ride, and we know it’s not going to be over,” said Kramer, whose registry includes half-sibling groups with more than 100 members. “In a donor-conceived person’s life, every day there is the possibility of a half-sibling coming along.”

The American Society for Reproductive Medicine doesn’t set a specific limit on the number children an individual sperm donor should be allowed to produce, but its guidelines say “it has been suggested” that in an area with a population of 800,000, limiting a donor to 25 births would avoid any significant added risk that half-siblings would meet without knowing their common ancestry and have children together.

For as far back as she can remember, Richardson knew how she and her twin sister Lauren were conceived. Her mother, a math teacher, was 35 and divorced when she made what was, at the time, an unusual decision: She decided to become a single mom via in vitro fertilization.

“She was such a tremendous mother that I never felt that there was something wrong with only having one parent,” Richardson said. “She was really caring, and I didn’t feel like I was missing out on anything.”

Richardson, who also works as a case manager at a youth emergency shelter, submitted her DNA to 23andMe, which determined that she was mostly British and Irish, with some German, French and Eastern European.

But that wasn’t the only revelation. The website gives you the option of seeing matches with consenting DNA relatives and allowing them to see matches with you. Richardson quickly found that she had a half-sibling. But there was one problem: That person had never been told he was conceived via a sperm donor, and he thought there must be some mistake. After a while, he stopped responding to Richardson’s messages.

Kramer said many of the half-siblings now being identified by DNA testing websites don’t know they were conceived via sperm donors, and when they find out, they react in a variety of ways.

“In our research, what we found, surprisingly, is that the No. 1 emotion that people feel when they find out as adults is relief,” she said. “For a lot of them, they always felt there was something off — either they were adopted, or maybe their mother had an affair. So they suspected something, but even when they pressed their parents, their parents denied it.”

It can feel good to know that your intuition was correct and you weren’t just imagining things, Kramer said, but there can also be anger that you weren’t told the truth.

Richardson’s second match with a biological half-sibling came about six months after the first. This time her half-brother, who is 30 and lives in Toronto, knew he was donor-conceived and wanted to communicate. The half-siblings messaged each other, became Facebook friends, and video-chatted. They got along well, discovered a shared interest in the arts and noticed a family resemblance.

“It’s so strange. I can see myself in your eyes,” Richardson told her Toronto half-sibling when he visited her in Chicago, adding that she’s been told she has kind eyes. “I’ve been told I have kind eyes too,” he said.

Richardson’s half-sibling matches started coming faster in 2017, at first from 23andMe, and then from and Ancestry.com, which Richardson’s twin sister, Lauren, a site manager at a college readiness outreach program in Ann Arbor, Mich., joined in 2018. There was also a match that came from the Donor Sibling Registry.

Today, there are so many Richardson-related half-siblings that the group has attempted to streamline the entry process for new members with spreadsheets and a Facebook group.

And the surprises keep coming.

One of the half-siblings, Marie McCulloch, 35, proved to have a knack for DNA sleuthing. She made family trees using DNA information and historical records, and tracked down the man she thought could be the sperm donor, who had raised two sons.

McCulloch sent a letter to the home of the older son last month. Within six days, she got a voicemail: “Hey, it’s your half-brother. Give me a call back.”

McCulloch hasn’t yet talked to her biological father, who is in his 80s, but she’s in contact with the son, who has sent photos.

For McCulloch, a medical coder who lives near Binghamton, N.Y., the experience has been mostly positive. She feels a little heartache over missed opportunities to know her biological father and his relatives, but now she knows her eyes and nose resemble his, and she doesn’t have to wonder if he might be the stranger she passes on the street.

“Finding these people I didn’t know I was related to, I feel a lot more grounded and more sure of myself,” she said. “It’s like I discovered a limb I didn’t know I had.”

For Richardson, the journey has been less emotional, but rewarding nonetheless. She views her Toronto half-sibling as a close friend, she’s glad to have more information about her family’s medical history, she’s learned a lot about the donor-offspring experience, and she’s grateful to McCulloch for finding the donor.

“As someone who’s an artist, I always hoped that (my biological father) would be this bohemian musician or artist, but he was an airline pilot, which is a very skilled and challenging job,” she said.

“It feels nice to have found him. Maybe we’ll be able to meet him someday.”