Minneapolis – Delta Air Lines is now offering a new deluxe animal crate that can be tracked like luggage and is designed to reduce stress and prevent escape by passengers’ furry friends.

After a two-month trial and five years of research, CarePod is launching its product on Delta flights that begin and end at eight different airports, including Minneapolis-St. Paul International.

In the next few months, Delta will expand the service to four more airports, Detroit, Seattle, Salt Lake City and Kansas City, with an eventual rollout nationwide.

The companies herald the pink-and-white crates as “state-of-the-art,” with built-in water bowls that automatically refill, angled ventilation slates that reduce stress by minimizing jarring lighting transitions and thicker walls that the airline claims no animal can chew through and provide better climate control. The CarePod transport will cost $800 plus taxes. 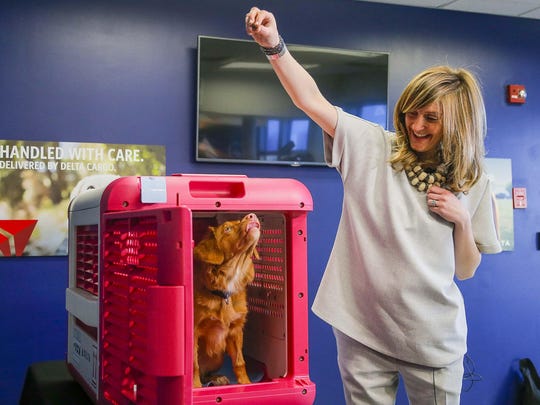 The news comes the same day the U.S. Department of Transportation proposed a new rule that would allow airlines to ban untrained comfort animals from plane cabins. The regulatory move follows years of debate over whether an emotional support animal be given the same travel access as a fully-trained service animal.

Delta’s fancy kennel is meant to reduce the number of animal injuries and deaths that can occur when pets are transported in a plane’s cargo bay. It’s also meant to encourage travelers to check their pets in rather than carry them aboard.

The airline industry and veterans groups have argued the rising number of untrained – and sometimes, ill-behaved – nonhuman creatures approved as comfort animals is causing problems for those with more serious physical and psychiatric conditions who rely on trained service animals.

Veterans groups support more regulation for comfort animals. Such groups rely on trained service animals and they are afraid the swelling use of comfort animals is creating a public backlash against all animals on planes.

Some travelers have sought certifications for emotional support animals for fear their pet could die or be injured if checked in as cargo. In 2018, 10 pets died while being transported on U.S. airlines, including four on Delta, according to DOT’s most recent full-year data.

Several incidents involved animals chewing their way through the kennel walls, resulting in escaped dogs and cats that were injured or died from a variety of causes.

Delta and CarePod promise to offer its customers’ dogs and cats the safest ride possible in cargo through a number of features. The CarePod’s walls are thicker and the door is triple-locked.

“It’s got ventilation holes in it but there is no way for an animal to bite through it,” said Debbie Egerton, a Delta spokeswoman.

The spillproof water bowl can hold up to a liter of water and the crate’s walls are made from nontoxic, UV and antibacterial treated materials. Pet owners can view their animal’s location through updates on their smartphones, while Delta’s cargo center digital tracks the pets’ journey.

“As the only airline to offer this premium pet travel solution, it represents a significant improvement for the millions of people who want to travel with their four-legged family members,” said Shawn Cole, vice president of Delta Cargo.

In 2018, Delta transported more than 75,600 pets, second only to Alaska Airlines among U.S. carriers.