Jigsaw puzzles are now in vogue for adults who want to relax, compete

Jigsaw puzzles are now in vogue for adults who want to relax, compete

There are jigsaw puzzle nights at coffee shops and libraries. Puzzle groups and puzzle games online. Hand-cut wooden puzzles that cost thousands of dollars. And puzzle designs that range from edgy, original artwork to your own, custom-ordered family photos.

Jigsaw puzzles for grownups are in vogue.

“I was not as passionate about jigsaw puzzles at first, but once I started doing them, I saw the loveliness of these puzzles,” said A.J. Jacobs, a writer working on a book about puzzles, including jigsaws and crosswords. “Puzzles are a very soothing and joyous way to spend a couple of hours. They’re physical, tactile pieces and you get an endorphin rush when pieces snap into place.” 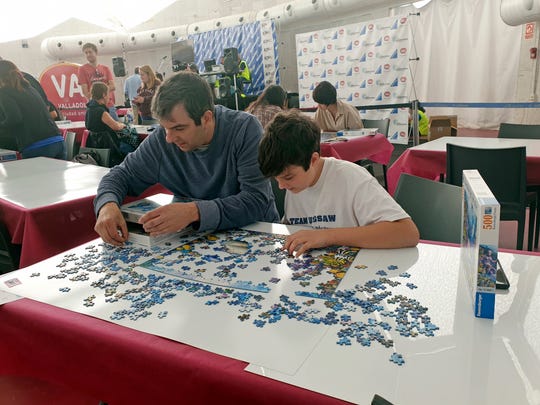 This photo taken on Sept. 29, 2019 and provided by A.J. Jacobs shows Jacobs and his son Zane, 13, during an event at the 2019 World Jigsaw Puzzle Championship in Spain. There were 40 countries represented at this competition. Jigsaw puzzles are in vogue. There are puzzles left out in offices and at coffee shops, puzzle clubs and competitions online, and artistic, mind-bending puzzles that sell for thousands of dollars. (Photo: Julie Jacobs, AP)

Fans say jigsaws provided respite from daily stress, a chance to step away from the screens and be in the moment.

Abby Matson, 37, found them therapeutic after the unexpected death of her dog three years ago.

“The puzzle was the only thing I could do to keep from crying,” she said.

Matson’s friend, Abby McDaniel, 38, joined her. “We stayed up so late drinking wine and doing this puzzle,” Matson said. 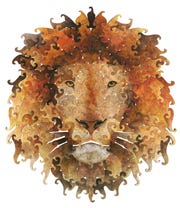 This undated photo provided by Stave Puzzles shows one of their jigsaw puzzles titled "The Mane Event," which sells for $1,695. Stave Puzzles are said to be a favorite of Bill and Melinda Gates. (Photo: Geoff Cota, AP)

They started a puzzle group that now has six members. It’s informal. Members send photos of a completed puzzle before mailing it to the next person.

“It brings out an inner competition,” McDaniel said.

Jacobs, author of books including “The Know It-All’’ and “The Year of Living Biblically,’’ enjoys immersing himself in an activity and then writing about it. Part of his research into puzzles took him to the World Jigsaw Puzzle Championship in Spain, a timed competition with teams representing 40 countries.

He, his wife and two children finished second to last. A team of four Siberian women won first place when they managed to finish all four puzzles in less than four hours. 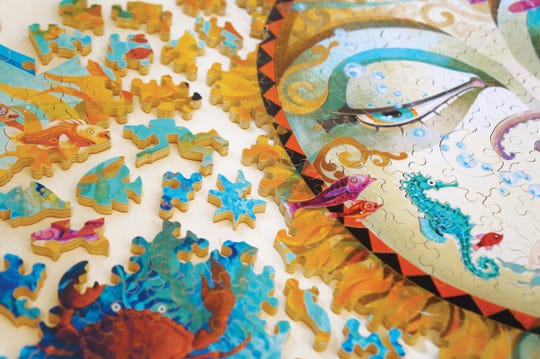 This undated photo provided by Stave Puzzles shows one of the company's traditional jigsaw puzzles titled "Ocean Sunset." Jigsaw puzzles are in vogue. There are puzzles left out in offices and at coffee shops, puzzle clubs and competitions online, and artistic, mind-bending puzzles that sell for thousands of dollars. (Photo: David Galchutt, AP)

“Russia is a force to be reckoned with,” Jacobs said with a laugh.

While many puzzlers are happy with cardboard puzzles, there’s also a market for wooden and artisanal ones. Inspired artwork has replaced campy photos. Some enthusiasts buy special frames, glue and other tools for preserving finished jigsaw puzzles.

Vermont-based Stave Puzzles makes a wide range of wooden puzzles, from “Tidbits’’ to “Tormentors’’; they sell for hundreds, even thousands of dollars.

“Our sales are up 25 percent in the last decade,” said company founder Steve Richardson. “We are now seeing orders from the children and grandchildren of some of our original customers, so it is definitely a generational activity.” 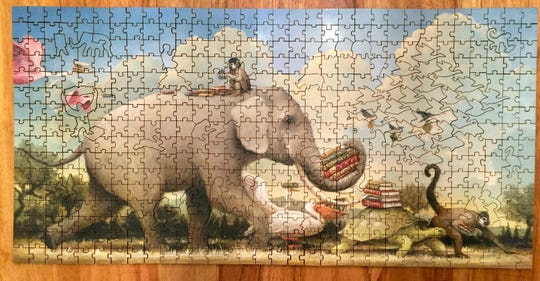 In addition to getting nicer, jigsaw puzzles have become specialized too. There are 3-D and two-sided puzzles. Stave’s “trick puzzle” can be solved in multiple ways, rated on a scale of 1 (easy) to 5 (difficult). Customers cannot buy a 5-trick puzzle without successfully completing a level 4 first.

Other people prefer a simple jigsaw that reminds them of childhood – but one that’s worthy of social media, of course.

Walking home after work one day, Kaylin Marcotte, 29, stopped at a toy store in New York City to buy a puzzle for the evening. “I ended up purchasing one of puppies jumping out of a basket,” she said. Seeing a gap in the market for sophisticated puzzles, she founded Jiggy Puzzles in 2018.

Jiggy’s puzzles are packaged in an elegant glass container and feature original drawings by female artists. They come in two sizes, 450 and 800 pieces, and many sell for about $40. The art ranges from New York City scenes to whimsical, feel-good drawings. One puzzle shows women’s breasts in varying shapes, including some with mastectomy scars.

This photo taken on Sept. 28, 2019 and provided by A.J. Jacobs shows Jacobs, left, his sons Jasper, 15, Zane, 13, and his wife Julie Jacobs at the 2019 World Jigsaw Puzzle Championship in Spain. Jacobs, along with his wife and two sons, represented the U.S. in the jigsaw puzzle competition. Jacobs is currently at work on a book about puzzles that's expected to publish in 2021. (Photo: Julie Jacobs, AP)

To launch Jiggy, Marcotte hosted a puzzle night at the Soho House in New York City. About 50 young professionals arrived dressed for an evening of drinks and jigsaws.

“I’ve always loved puzzles and will occasionally get a CVS puzzle, but it’s kind of a bummer because it’s made for an 8-year-old,’’ she said. “I can’t Instagram that.”