Nicole and David Seals are the co-owners of Due Venti restaurant in Clawson. She is also the restaurant’s pastry chef; he is the executive chef. And because David works until quite late every evening, breakfast plays a central role in their household. 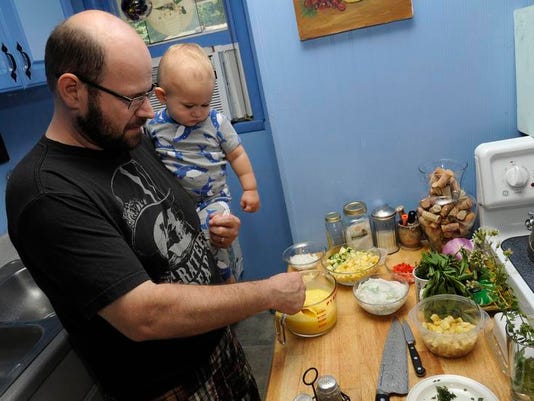 Nicole and David Seals are the co-owners of Due Venti restaurant in Clawson. She is also the restaurant’s pastry chef; he is the executive chef. And because David works until quite late every evening, breakfast plays a central role in their household.

“Most families have dinner together,” Nicole says. “But to me, breakfast is the most important meal of the day.” Adds David: “I get a good three hours with the family in the morning. We ease into it eating breakfast, taking walks and playing with our son.”

A typical breakfast at chez Seals might include an egg dish like a frittata, a platter of fresh fruit and a homemade pastry accompanied by cappuccino made with fresh roasted coffee beans from Chazzano Coffee in Ferndale. “It’s the only coffee we drink, and we also serve it at the restaurant,” Nicole says.

The Clawson resident says she remembers helping her mom and grandmother in the kitchen from the time she was very young. And by the age of 14, when most of her friends were reading Seventeen magazine, she was devouring cooking magazines like Saveur and Gourmet.

“There was something alluring, not just about the recipes and the cooking aspect, but I was also interested in the people … their stories and experiences … as well. And I liked the idea of making people happy through food,” says the graduate of the Culinary Institute of America in Hyde Park, New York.

Nicole’s first job was working for Tariq Hanna. “He and his dad had a party store in Northville where I lived,” she says. “Tariq cooked prepared foods and pastries in the back. So I went in there with a lot of confidence and said I wanted to be a chef. He told me all the negatives, but it didn’t sour my 15-year-old passion.”

After working with him for a week, Hanna started teaching Nicole how to make puff pastry and other dessert classics. (Today Hanna is the co-owner of Sucre, a nationally renowned dessert-only restaurant in the Garden District in New Orleans.)

David, on the other hand, became a chef by accident. While working at a gas station in 1992, a friend got him a job at a Ruby Tuesday restaurant as a dishwasher, and “I’ve been working in kitchens ever since,” he says. After stints as a grill cook, line cook and kitchen manager at various local restaurants and a country club, Seals ultimately was appointed the executive chef at Federal Mogul, where he worked for nine years until opening Due Venti.

The couple met in 2000 and were married in 2003. In the early years of their marriage, while David was cooking at Federal Mogul, Nicole was employed as a nanny for several families while also doing some catering and freelance teaching. But when she noticed a building for rent in her neighborhood in 2007, she thought it might be a good place to teach cooking classes and sell prepared foods for carry-out. And David thought he would help her just on the weekends.

“But while on a camping trip, the concept for a restaurant was born and it was exciting and liberating,” Nicole says. “And we have no regrets.”

Preheat oven to 425 degrees. Grease a 9-inch pie dish. In a large bowl, beat the eggs until the whites and yolks are completely incorporated.

Reserve ¼ cup of the grated cheese for later. Then add the remaining ingredients and beat until mixed well. Place frittata batter into the greased pan.

Place pan onto a cookie sheet and place in oven. Bake 15 minutes. Carefully pull out the frittata and sprinkle remaining grated cheese on top. Place back in oven to bake an additional 15 minutes or until golden brown and fluffy. Allow to cool for 5 minutes before slicing. Serves 6.

1 ½ pints fresh figs, stems removed and each cut into 8 wedges

Preheat oven to 400 degrees. In a small bowl, combine the ricotta cheese, orange peel and nutmeg. Set aside.

Lay out the sheet of thawed puff pastry onto a cookie sheet that is lined with parchment paper. With an offset spatula or large spoon, spread the ricotta mixture on the puff pastry, leaving a 1-inch border around the edges of the pastry without any filling on it, for sealing later.

Slice the figs in wedges (don’t forget to remove the stems) and place in a bowl. Sprinkle them with 2 tablespoons of sugar, then gently toss so the figs hold their shape. Arrange the figs close together in neat rows all along the pastry (on the areas where the ricotta has been spread). Fold the top and bottom edges inward and crimp once the edge of the pastry has reached the fruit. Now fold both side edges inward in the same manner. Be sure to press the pastry once more, all around the edges, to be sure it’s really sealed. Dip a pastry brush into the beaten egg and brush the entire pastry with the egg (this is to keep the fruit from drying out during baking, and it also gives the pastry a nice “sheen”).

Place in the oven and bake for 12-15 minutes or until the pastry is golden brown. Allow to cool for 20 minutes on the sheet tray.

Over a double boiler, slowly melt the dark chocolate. Then dip a fork into the melted chocolate and drizzle the chocolate over the entire pastry, repeating until the desired amount has been placed on the tart. Serves 6.

Can be made day before and kept at room temperature.

Place a large, heavy skillet over medium heat. Put oil in pan and allow to heat up. Add the potatoes and cook for 5-8 minutes, stirring frequently, until tender. Add onions and garlic; cook for 2-3 minutes. Add remaining vegetables and cook 4-5 minutes, while stirring throughout cooking. Add salt and peppers. Stir well and serve. Serves 6.

Know of a chef — or a restaurant whose chef — you’d like to see featured here? Email the name of the chef and/or the restaurant to judybham@aol.com — and stay tuned. Who knows, you may find out what he or she is making at home soon.