At home with chef Eric Voigt

At home with chef Eric Voigt

Chef Eric Voight, executive pastry chef at the Big Rock Chophouse and The Reserve in Birmingham, shows off a trio of dishes.(Photo: Photos by Max Ortiz / The Detroit News)Buy Photo

Eric Voigt, executive pastry chef of the Big Rock Chophouse and The Reserve in Birmingham and also part-time baker at the MotorCity Casino in Detroit, clearly remembers making French toast for his family at age 6 or 7.

“I didn’t know then that I wanted to be a chef some day,” he says. “I just enjoyed doing it because I wanted to make everybody happy.”

While attending South Lyon High School, Voigt says he had several different jobs, including working in a factory, working as a cook at McDonald’s and doing landscaping. “I was trying to figure out what to do with my life and eventually decided cooking was what I wanted to do,” he says.

While attending Oakland Community College’s culinary program, the chef worked at Diamond Jim Brady’s Bistro in Novi and at the now-closed Tribute restaurant in Farmington Hills.

“I was one of the workers when renowned chef Takashi Yagihashi was there,” he says. “And then, shortly after he left, I ended up working under head chef Don Yamauchi, solely doing pastry and doing it at a whole new level,” says Voigt, 35.

After stints at the MGM Grand Casino in Detroit and Birmingham restaurants Chen Chow and Quattro, Voigt joined the Big Rock team almost five years ago. In 2015 he was named Pastry Chef of the Year for The Michigan Chapter of Chef de Cuisine of the American Culinary Federation.

Although he works between 80 and 90 hours per week, the chef says he still manages to cook at home every Sunday.

The Rochester Hills resident says he is particularly fond of the pasta recipe printed here because it utilizes a tomato sauce that was originally created by chef Joseph Cosenza. “We worked together at the MGM Grand Casino for many years and he’s a really good chef who taught me a lot,” Voigt says. (Cozenza currently teaches at Henry Ford College’s Culinary School.)

And Voigt also says he likes this sugar cookie recipe because the cookies end up having a nice crispy bottom and a softer top, which “makes them really tasty, and besides, the kids love them.”

The chef says his cooking philosophy is: “You’re just as good as your last plate. That was chef Takashi Yagihasi’s mantra.”

1 small can of tomato juice 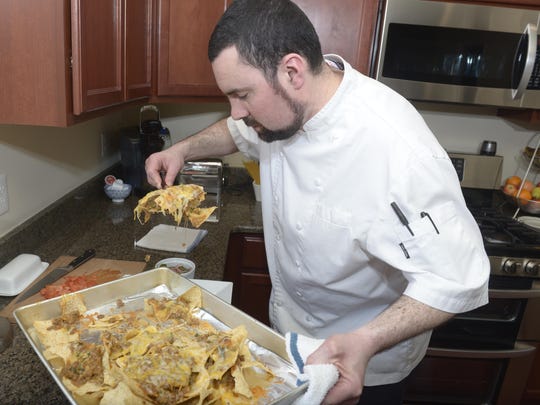 For the pickled jalapeño

Bring above ingredients to a boil. Put in a covered container and refrigerate for a day or two. When ready to prepare the nachos, remove jalapeno from marinade and use to garnish the nachos just before serving.

Preheat oven to 375 degrees. Put the olive oil in a saucepot and heat over medium high heat. Add garlic and onion and sauté until translucent. Next add ground beef, break apart and cook through. Add beans and tomato juice and mix well to break down the beans with the beef. Then add cilantro and taco spice, mix well and let cook down until very thick.

Put the tortilla chips on a cookie sheet. Pour the beef mixture over the chips, layer with more chips and add the cheese. Bake in a pre-heated oven until cheese is all melted and gooey.

Place on your preferred serving tray and garnish with chopped tomatoes, pickled jalapeno and dollops of sour cream. Serves 12.

Season the salmon with salt, pepper and Montreal-style seasoning. Heat sauce pan over high heat, add oil and slowly lay fish in pan. Let the fish sit there for a bit to get a good sear on the one side, flip over and place in oven until perfectly cooked.

Place a large pot filled 3/4 full with water on stove. Add the olive oil and seasonings. Bring to a boil over high heat. Cook until al dente. Set aside until ready to combine it with the tomato sauce.

For the tomato sauce

On low heat, in a good-size pot or crock pot, cook garlic and chili flakes until the garlic is a golden color.

While that’s cooking, put tomatoes through a food mill or through a grater. Add the tomatoes to the pot and bring to a boil. Turn down and simmer for about a half hour. Then add basil and simmer for another 1/2 hour. Remove basil stems and season to taste.

Heat cooked angel hair pasta in a sauté pan with some of sauce. Then place pasta in individual bowls, add a little extra sauce, place salmon on top and sprinkle with shredded Parmesan. Serves 4.

A splash of vanilla extract

In a mixer bowl that is fit with a paddle attachment, cream butter and sugar. Add egg and scrape down bowl. Sift dry ingredients and add slowly to the batter, then add sour cream. Mix just until combined. Using an ice cream scoop, create 3 dozen cookies and place on cookie sheet. Flatten cookies, press the rainbow sprinkles into the top of the dough and bake in a 325 degrees convection oven or 350 degrees standard oven until golden. Serves 12.