From farm to Bon: Behind the counter of Detroit’s premier chocolate shop

From farm to Bon: Behind the counter of Detroit’s premier chocolate shop 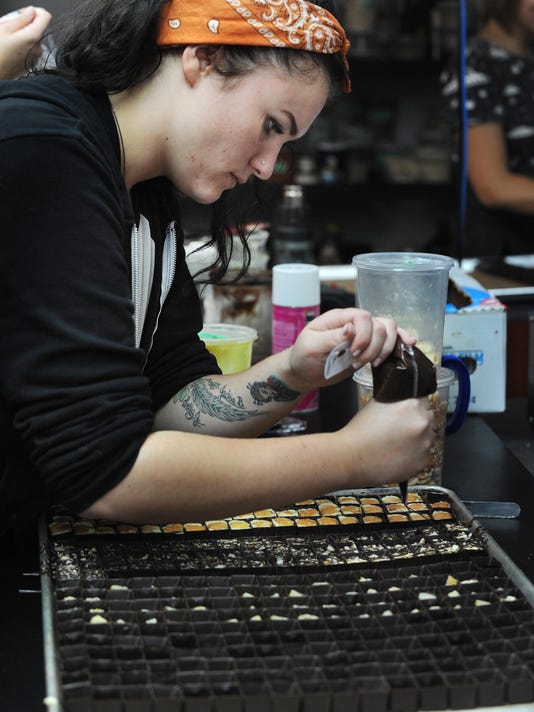 Alex Clark drove up to Acre farm, tucked behind Corktown and I-75, with her 10-year-old dog Lou, always by her side. Sporting her signature orange headband and green jumpsuit, she bounded out of the Jeep Wrangler and hugged Hannah Clark, Acre’s co-founder of no relation, like a best friend.

Standing among vegetation spread over an acre, Clark inquired about the tomatoes, squash and basil for her Bon Bon Bon Fall Collection. The 28-year-old founding chocolatier (who pooh-poohs the title CEO) imports the cocoa for her creations from South America, but finds joy in featuring local ingredients from Acre, Buffalo Street Farm and the collective Grown in Detroit in her 1.21-inch Bons handcrafted to fit perfectly in your mouth.

“I really like the juxtaposition of having a product that’s made with ingredients from Ecuador and Columbia, and then driving over here and picking some up,” she said. “... I like to think that it captures the balance that everybody hopes to have in the food industry.”

Since launching in 2014, Bon Bon Bon has gained national recognition as a Martha Stewart American Made Award finalist, and Forbes named Clark on its 2016 “30 Under 30 Food & Drink” list. Touted as the first artisan chocolate shop to open in downtown Detroit in 40 years, Clark has created over 200 flavors, from S’mores and Better Buttter Crunch (featuring Better Made chips), to Cider & Donuts in the collection that debuted Friday.

But the chocolate enthusiast originally thought she’d open an ice cream shop. She fell in love with ice cream at age 14 when she worked at the Plymouth Dairy King down the street where she grew up. She then attended Michigan State University to study food science and hospitality, dreaming of one day opening her own ice cream store.

In 2007, she moved to Norway where her grandmother lived and visited dozens of European cities. Nearly broke at 19, she couldn’t afford restaurants, so she sampled cultures through chocolate instead.

“I was buying a piece of chocolate everywhere I went because I couldn’t buy the food,” she said. “It was usually under 3 euro, and that was about my whole budget.”

One visit to Amsterdam, she stumbled on the chocolate shop Puccini Bomboni.

“It was so good that I just got back in line and had another,” she said. “And I had this huge emotional breakdown. I was like, ‘This is what I want to do with my life.’ And that was it.”

Production Manager Margie Spakoff taps the mold to drain away excess chocolate. Bon Bon Bon taps a library of over 200 chocolates from places like Ecuador, Colombia and Venezuela for their confections. Brandy Baker, The Detroit News
Fullscreen

Blueberry Pancakes Bons each get topped with a piece of the dried fruit. Since launching in 2014, Bon Bon Bon has prided itself on its "hand-u-factured,” that is handmade, chocolates. Brandy Baker, The Detroit News
Fullscreen

Chocolatier Alexandra Clark believes in sourcing many ingredients, like this sweet dumpling squash from Detroit’s ACRE farm, from local businesses to create luscious fillings for her chocolates. Brandy Baker, The Detroit News
Fullscreen

Clark begins the “Squish Squash” bon by creating a confiture, which is a fruit preserve or jam, using the sliced sweet dumpling squash. Brandy Baker, The Detroit News
Fullscreen

Clark strains the squash confiture through a sieve. "It has to be delicious and accurate," said Clark of her company’s unique flavor combinations, which often mix sweet with savory. Brandy Baker, The Detroit News
Fullscreen

Each dark chocolate shell is filled with a layer of the squash confiture for the “Squish Squash” bon. Brandy Baker, The Detroit News
Fullscreen

A shower of toasted pepitas rains down on the nearly-finished "Squish Squash" bons. Brandy Baker, The Detroit News
Fullscreen

"Pear'd with Sage,” part of the Fall Collection which is only available for six weeks, is actually a sage-infused pear Pâte de Fruit, a kind of sugared French gummy candy. Brandy Baker, The Detroit News
Fullscreen

The "Caprese" bon spotlights ACRE farm’s produce with its red tomato confiture and basil ricotta ganache, under a balsamic glaze in a dark chocolate shell. Bon Bon Bons are available at the company's Detroit store in the Dime Building or their Hamtramck "Manufactory" on Evaline St. (only on Saturdays). Brandy Baker, The Detroit News
Fullscreen

The next eight years she worked as an agricultural economist in New Zealand, apprenticed at chocolate shops and trained to be a pastry chef at Schoolcraft College and The French Pastry School in Chicago — with the goal of opening the best artisan chocolate shop in Detroit.

As cars whizzed down the highway behind the farm, Clark said she wouldn’t want Bon Bon Bon based anywhere else.

“We’re so driven on this idea of being able to provide good jobs and create good relationships and make really high-quality chocolate in the United States, and that’s something that Detroiters can get behind,” she said.

Clark’s short and sweet answer: “A lot of love.”

The Fall Collection features eight pieces sold with the usual rotation of 57 in the Detroit shop on Fort Street and Hamtramck shop on Evaline Street that smells like chocolate heaven.

Inventing new flavors involves the Babes Babes Babes (the 10 employees, mostly spunky women under 35) putting their heads together. For this collection, they brainstormed what reminds them of fall.

“We’ll put things together like cider and donuts, beets and sunflower, biscuits and butter, or chestnuts and pear,” Clark said, showing her notes in block handwriting. “Then we can start recipe testing some of those combos.”

Of course, not all pan out, like Peter Piper, a purple vegetable-themed Bon, that got scraped.

One morning last week, Clark made the first batch of the new Squish Squash Bon with a squash confection and a pepita gianduja.

“I’ve been dreaming of making pepita gianduja for so long,” she said, noting that gianduja is “something mystical to people,” but it’s just a combination of nut butter and chocolate. (Similar to Nutella, it can be paired with toast or fruit.)

A finished “Squish Squash” Bon sits amid toasted pepitas. Varieties of Bons including ones made with Luxardo cherries, black truffles or brie are being created. (Photo: Brandy Baker / The Detroit News)

As Clark sets up her induction burner, Robot Coupe processor and plugs in cords dangling from the ceiling, production manager Margie Spakoff, 21, hops from task to task — whipping up vanilla bean custard ganache one moment and shells from a faucet dripping dark chocolate the next.

“A chocolate shop is more like a science lab than it is like a hot foods kitchen,” Clark said. “It’s easier for us to relate to coffee roasters than it is to chefs because we have to control a lot of variables.”

The dizzying array of variables will be easier to control when Bon Bon Bon moves into a 3,000-square-foot building on Joseph Campau in January, where Bons will be made and sold. But for now, the Babes don’t mind the cramped 650-square-foot quarters.

“I don’t think of them as co-workers any more,” said manager Neleda Estioco, 23. “We’re just like a family of friends.”

In case you’re curious, between testing recipes and baking, the average employee eats six pieces a day. “I had seven today,” said Estioco, laughing, “so I guess I’m a little over.”

“We know what chocolate is which. We don’t need a map. So it’s more like a chess game. Everyone’s looking at the box like, ‘If he takes that, I’m taking this one,’ ” he said.

Called bonbons in Europe, Clark’s chocolates have no strict definition.

“‘Bon’ means ‘good’ in French and many languages. A Bon Bon Bon would be a ‘good goodie,’ ” said Clark, explaining the name she thought of at 3 a.m.

Clark pays up to $14 per pound for chocolate, whereas most pastry chefs buy the standard $6 per pound. Her shelves also contain exotic ingredients like $400 black truffle powder, which explains why the Bons are $3 — a reasonable price, in Clark’s opinion.

This spring, a customer who visited Amsterdam brought back Puccini Bomboni bonbons, after Clark told her about the shop that inspired it all. Tom Clark said his daughter opened the box for everyone to try her “favorite chocolate on Earth.”

He sampled one, and has to be honest: “Alex’s chocolate is much better.”

Chop the sweet dumpling squash into small, even pieces. Remove the seeds. Using an induction burner (or pan on the stove), toast the pepitas on medium for about 10 minutes, until you see the oils leach out and pepitas turn shiny. Stir frequently.

Pour in 150 grams of sugar, stirring until the sugar melts. “When you hear the pepitas popping, that means they’re totally done,” Clark said. Pour the pepitas on a large tray to cool while cooking the squash confiture.

Measure equal parts squash to sugar. This Bon batch uses 140 grams squash and 140 grams sugar. Add water to a small pot (enough to wet the squash), then add both squash and sugar. Cook 5 to 10 minutes on medium low until the squash is tender.

Use an immersion blender to process the squash in the pot until it’s a thick and even consistency. Run the squash through a strainer to remove any remaining chunks.

Put a quarter cup of toasted pepitas to the side. Add the rest to a food processor. Blend the pepitas until they are of a nut butter consistency, stopping frequently to scrape the sides of the bowl. In a separate bowl, measure 530 g of white chocolate. Melt in the microwave at 15 second intervals, stirring each time, until completely melted. Once melted, add one scoop of melted white chocolate to the food processor at a time, pulsing between additions. Blend in all the chocolate until the mixture thickens into a smooth paste. Taste and salt if needed.

Add the pepita gianduja to a piping bag to cool down on a counter (it pulls the heat out), keeping the gianduja moving to avoid lumps. In a dark chocolate shell, pipe an even layer of the squash confiture on the bottom.

Check the temperature of the pepita gianduja by touching the bag to the inside of your wrist. “Chocolate melts at body temperature,” Clark said. “If it’s warm on the inside of your wrist, then it’s too hot to pipe.” Once the temperature is neutral, pipe the gianduja over the confiture, filling just below the top of the shell. Chop the quarter cup of unprocessed toasted pepitas until fine. For decor, sprinkle on top of the gianduja on one end of the Bons.