There is something about that pumpkin-spice combo of cinnamon, ginger, cloves and nutmeg that offends my sensibilities, and it is not the flavors. 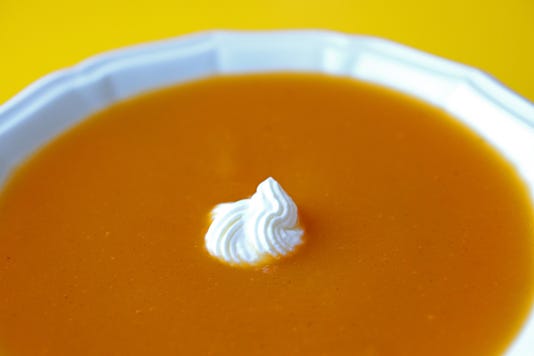 Pumpkin Spice was always my least favorite Spice Girl, coming in even after Sugaran’ Spice.

There is something about that pumpkin-spice combination of cinnamon, ginger, cloves and nutmeg that offends my delicate sensibilities, and it is not the flavors themselves. The actual taste is wonderful.

My cousin, who lives near Washington, D.C., swears she saw a sign there for pumpkin spice pizza.

Clearly, pumpkin spice is not going to go away on its own. And so, like other things that will not go away on their own — appendicitis, leprosy, the Tanganyika Laughter Epidemic of 1962 — it has to be dealt with.

So I dealt with it by making a handful of dishes that are actually good uses of pumpkin spice. I also made my own pumpkin spice mix to use in most of these recipes, because it was ridiculously easy to do.

I started off with a savory dish, figuring that everything else would be dessert. But when you are dealing with pumpkin spice, even something savory can turn out to be a little sweet.

Maple syrup makes sense, of course, because it is so often added to roasted butternut squash to bring out an irresistibly nutty taste. And not enough is used to make it cloying; just two tablespoons for four to six generous servings.

But the pumpkin spice is a flash of genius. It doesn’t take much — just half a teaspoon for up to six servings — to put an autumnal sheen to the soup. It is thick, hearty and luscious.

Perhaps the ultimate expression of pumpkin spice that is not a pie or a latte is a cheesecake. I started with a Paula Deen recipe that was already good, eliminated some of the butter from the crust (because, you know, it’s Paula Deen, and the butter literally leaks out of the pan if you use the amount she calls for) and added a bunch of cheesecake tricks to make it great.

Even experienced cooks can sometimes have problems with their cheesecakes either cracking on top or being lumpy inside. That’s where the cheesecake tricks come in.

To keep the top from cracking, you should cook the cheesecake in a water bath; in other words, the cheesecake pan should be placed inside another pan that has boiling water in it (it’s easiest to put the one pan inside the other before you add the water). To keep water from seeping into the bottom of the springform pan, line the outside with aluminum foil.

To make a cheesecake nice and smooth, the cream cheese, sour cream and eggs have to be at room temperature, which means leaving them out for four to five hours. The eggs should be added last and stirred in by hand just until it is combined.

My cheesecake came out perfect — creamy and incredibly rich. And the pumpkin spice flavor, which in this recipe is created with cinnamon, nutmeg and cloves, somehow made it better with a touch of seasonal delight.

The thought occurred to me to make a spice cake with pumpkin spice, but I decided against it as being too obvious. So instead I went the brownie route and made Pumpkin Blondie Bars.

The blondie part is straightforward; it is not much different from a regular blondie, but with pumpkin purée and a dash of pumpkin spice. Where these bars really shine is in the topping, a swirled mixture of a cream cheese topping and the blondie dough.

Obviously, the pumpkin spice was beginning to get to me, because I decided also to make PSL Jell-O Shots. That’s PSL, as in pumpkin spice latte, and yes, I said Jell-O shots.

I’ll admit, I was a little surprised that they turned out to be so good. But when you think about it, why wouldn’t they be?

They are just a mixture of coffee, Kahlúa, heavy cream and just enough pumpkin spice, turned semi-solid in gelatin. It really is like pumpkin spice latte Jell-O.

They are not just fun to eat, they are also delectable. In fact, pumpkin spice has, in me, a new convert.

But don’t expect me to like pumpkin spice pizza. 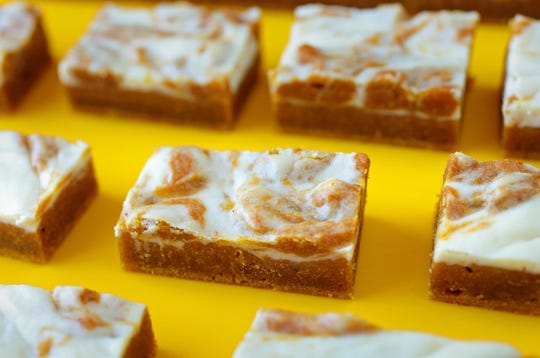 2 sticks (1 cup) unsalted butter, melted, plus more for the pan

2. Microwave the cream cheese in a medium, microwave-safe bowl in 15-second bursts, stirring after each one until smooth but not hot. Whisk in the sour cream, 2 tablespoons of the flour, granulated sugar, 1 teaspoon of the vanilla and 1/2 teaspoon of the salt until smooth. Set aside.

3. In a small bowl, whisk the remaining 2 1/2 cups flour, pumpkin spice and the remaining teaspoon of the salt until well combined.

4. In a separate large bowl, whisk together melted butter and brown sugar until smooth, then whisk in egg and remaining 1 teaspoon vanilla. Scrape the sides of the bowl with a rubber spatula, then whisk in pumpkin puree and scrape down sides again. Whisk in the flour mixture until no streaks remain.

6. Bake until a toothpick inserted in the center comes out with just a few crumbs, 45 to 50 minutes. Let cool completely in the pan, then cut into bars and serve. 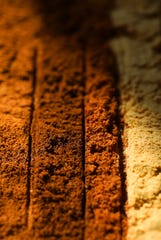 Mix all ingredients. Store in an airtight container in a cool, dry place for up to 6 months. 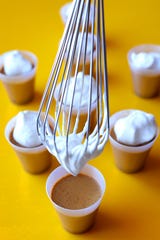 1. In a small saucepan, bring coffee to a boil. Remove from heat and whisk in gelatin. Add Kahlúa, heavy cream and pumpkin spice, and whisk to combine.

2. Divide mixture evenly among 10 plastic shot glasses. Transfer to refrigerator to set, about 1 hour. When fully set, top with whipped cream and a dusting of pumpkin pie spice before serving.

1. Preheat oven to 400 degrees. Place whole squash on baking tray and bake for 1 to 1 1/4 hours or until a knife pokes through skin easily. Remove from oven and let cool. Cut in half lengthwise and scoop out seeds; then scoop out flesh into a blender or food processor (you may have to do this in batches). 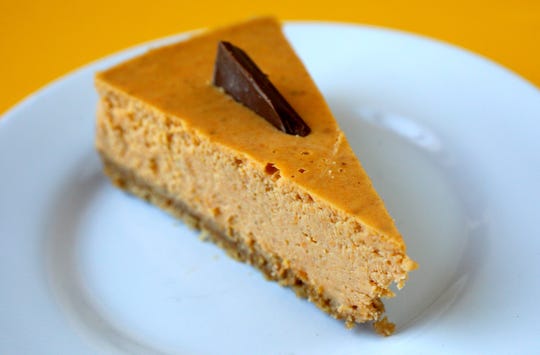 Note: For best results, the cream cheese, eggs and sour cream must be at room temperature. Let them sit on the counter for 4 to 5 hours before cooking. If the cream cheese still feels a bit chilly, microwave it for 15 seconds until it is very smooth but not hot.

2. In a medium bowl, combine graham cracker crumbs, brown sugar and 1/2 teaspoon of the cinnamon. Add the melted butter and stir until well-combined. Press down flat into the bottom of the prepared springform pan. Set aside.

4. Put some water on to boil. Wrap bottom of pan with aluminum foil, coming up at least a few inches on all sides. Pour custard into crust and spread out evenly. Place pan in a larger pan and pour in boiling water between them until it comes halfway up the sides of the springform pan, but is below the top of the aluminum foil. Cook in oven for 1 hour. Remove from oven and remove springform pan from water bath. Let sit 15 minutes. Cover with plastic wrap and refrigerate at least 4 hours.

Adapted from a recipe by Paula Deen