An intense process: The California almond’s journey from orchard to grocery shelf

In California, money does grow on trees. Almonds constitute a $5.6 billion industry, and 2.26 billion pounds were shipped from California last year to be roasted and salted.

An intense process: The California almond’s journey from orchard to grocery shelf

Their gnarled branches are heavy with dusty green almond hulls, fuzzy to the touch. In two weeks’ time, the hulls will split, revealing the porous, caramel-colored shell beneath.

For now, the orchards exist as silent, geometric forests, stretching across 1 million acres of California land. Occasionally, a microsprinkler sprays a light rain, the moisture soaking rapidly into the thirsty ground. A tractor ambles between the neat rows of trees, unleashing clouds of dust. 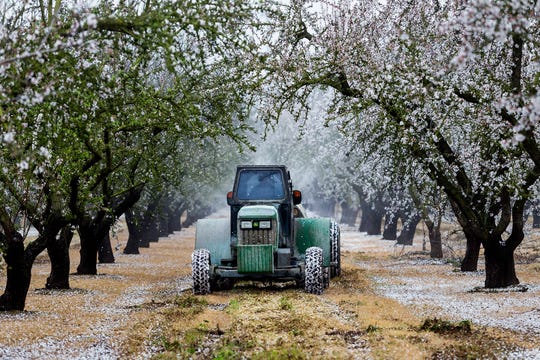 A farm worker drives a truck that sprays and fans out foliar nutrients as it makes its rounds on an almond tree farm in Modesto, Calif., on February 21, 2015. (Marcus Yam/Los Angeles Times/TNS) (Photo: Marcus Yam, TNS)

In California, money does grow on trees. Almonds constitute a $5.6 billion industry, and 2.26 billion pounds were shipped from California last year to be roasted and salted, or turned into anything from frothy, barista-friendly almond milk to marzipan sold on the streets of Berlin.

Soon, heavy steel machines will shake the trees into a frenzy, the nuts clattering into the dusty ground, then raked into neat rows to bake out in the sun for several days.

The harvest will begin.

“Take some of the choice fruits of the land in your bags, and carry down to the man a present, a little balm and a little honey, gum, myrrh, pistachio nuts, and almonds.”

From the Bible’s Genesis to ancient Hebrew texts, almonds have accompanied humans throughout thousands of years of history. In 1325 BCE, Egypt’s King Tutankhamen was buried with a handful of almonds to snack on during his arduous trip to the underworld.

Almonds also symbolize rebirth, according to Ken Albala, a professor of history at the University of the Pacific and author of “Nuts: A Global History.” 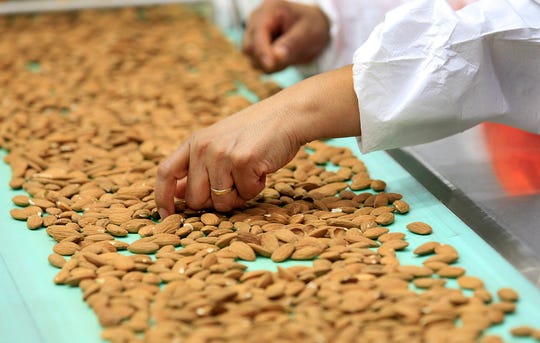 In medieval paintings, the Virgin Mary is often depicted within an almond shape, which hinted at the shape of a birth canal for Jesus’ rebirth.

Several hundred years later in the 14th century, within the walls of King Richard II’s castle, his master chef stewed fermented porpoise porridge, seasoned with almonds, milk and saffron. The chef recorded the recipe into one of the world’s oldest English language cookbooks, “The Form of Curye.”

Almonds appear in some of the world’s oldest recipes, ranging from Icelandic almond oil to Turkey’s tavuk gogsu, a rosewater and milk pudding enhanced with a splash of almond milk, sugar and shredded chicken.

First planted along the Mediterranean coast around 4000 BCE, almonds spread quickly through the Eurasian continent.

“The trade connections go from there to Norway, to Germany, to Venice, to the Eastern Mediterranean to the Indian Ocean to India, all the way around to Asia,” said Albala.

The valley of almonds

For the last century, the almond’s home has been in the Central Valley, whose climate is almost Mediterranean — if not for the Valley’s lack of water.

From seed to tree to nut, almond growing is a 25 year, water-intensive process.

The almond tree first starts to bear nuts around age 4 or 5, and produces yearly profitable harvests of nuts for the next 20 or so years.

“An almond tree is like a little baby,” said Carlos Rodriguez, a laborer at Done-Again Farms in Arbuckle. “You need to take care of that tree from the bottom until it dies.”

Fifty years ago, almond grower David Phippen’s father marked down on his calendar to open the floodgates of his irrigation canal every 30 days.

“He irrigated every 30 days whether he needed to or not,” Phippen said. “He farmed by the calendar.”

Every month, the locks on the canal turned, and thousands of gallons of water would sweep across the orchard, soaking every inch of soil.

“Each acre takes 4 feet of water to bring in a crop,” Monroe said. “You get a foot of it from rain if you’re lucky.”

The other 3 feet must come from irrigation. On one of his newest orchards, Monroe uses a dual-line drip system.

The system combines both buried line and microsprinkler irrigation. Buried line irrigation involves inserting a hose a few inches underground and allowing water to seep out via little holes. The water bubbles up from underground – one of the most efficient irrigation methods in practice today.

Microsprinkler irrigation involves tiny, localized sprinklers set up around the tree’s root system. They are set off by signals from a soil moisture probe, whenever the soil surrounding the trees’ roots becomes too dry.

When used in tandem, this irrigation powerhouse makes water usage around 90% efficient. Twenty years ago, irrigation technology was only 80 to 84% efficient, according to David Phippen.

During the wet season, from December through February, the orchard irrigation system lies fallow.

Then, 1 million acres in California suddenly bloom with delicate white flowers, and growers unload thousands of boxes of bees, imported from all over the country.

Growers deploy one or two hives per acre, each of which costs between $180 and $200 per season, unleashing the bees only on the sunniest days. Bees are so essential to almond production, that two summers ago in Fresno, thieves stole 2,500 hives worth $1 million.

“Every bee in the country comes to California for a winter vacation,” Monroe said.

After four or five weeks of the pollination craze, the trees settle into a five-month growing phase, when the fuzzy green almond hulls slowly ripen and harden throughout the hot, dry summer months.

At David Phippen’s farm, Travaille and Phippen, it’s nearly time for the harvest.

In mid-August, a yellow tractor will drive through the neat rows of trees, stopping at each tree. Lobster-like claws will extend from the machine, gripping the base of the tree and vigorously shaking it. Almonds will rain down, and dust will blow.

In the next few days, another machine, called a sweeper, will project a circular red fan that sends the resting almonds flying into a neat row in the middle of each row of trees.

From there, another tractor arrives to collect the almonds, sucking the nuts into a conveyor belt that stores them inside the tractor.

The nuts are then transported to the hulling and shelling facility, on an enormous lot directly adjacent to the orchards at Travaille and Phippen.

The nuts first pass through an enormous filter, which removes the large sticks and stones. The almonds then pass through a series of machines on a conveyor belt and are hulled and shelled. They emerge from the facility naked, stacked into enormous piles as tall as an average adult, ready to be sorted.

At the Travaille and Phippen processing facility, next door to the hulling and shelling, the nuts are sorted by size, and then by a robot, the only one of its kind.

The robot reaches a long, jointed arm, painted red, to select and pick out the nuts that are chipped, cracked, or display an abnormal color. First, the nuts are rapidly photographed by the robot, and those with impurities are picked out by the machine with long, dexterous fingers.

Even after this intense vetting process, each nut is scrutinized by employees, who sit at stations wearing blue gloves, running their hands over each nut to ensure that only the most perfect ones make it into the final pile.

The final group of almonds, which exhibit that perfect, characteristic taper, and a deep, warm woody color, are packaged neatly into white sacks in the packing and shipping facility, where they await foreign destinations such as India, Japan, China and Germany.

Only 10% of Travaille and Phippen nuts stay in the United States. However, at Done-Again Farms, the nuts are shipped straight to Blue Diamond in Sacramento.

The most versatile nut on Earth

Blue Diamond is an almond cooperative, an expansive umbrella organization that covers 3,000 almond growers in California. It operates via an elected board of 11 growers and distributors who represent nine growing districts and serve three-year terms. John Monroe is the director of the Arbuckle district.

Nearly every grocery store in the United States carries its signature Almond Breeze almond milk and its roasted almonds.

“Every major brand name company like cereal or granola bars, if they have almonds in them, chances are they’re getting those almonds from Blue Diamond,” said spokeswoman Alicia Rockwell. “We process them — we may roast them, slice them, or turn them into flour or butter.”

The almonds are trucked into Sacramento from all over California, and within its headquarters at 1802 C St., they are blanched, sliced, roasted, or turned into paste for almond milk and almond butter, or powdered into flour or meal.

Almonds are one of the most versatile nuts grown on this planet. The almond innovation center at Blue Diamond, the world’s only research and development center for almonds, operates behind the processing building.

Past its heavy glass double doors is a laboratory equipped with two ovens for roasting almonds, and anything a food scientist could dream of having, from tiny jars labeled with flavors like saffron, vanilla, coffee, cardamom, sriracha and coconut, to precision weights and pH buffers.

At the lab, senior food scientist Stephanie Doan picks up a bag of barbecue-flavored chips.

“These don’t have almonds in them, but we like to stay informed about industry trends,” Doan said.

The counter is stacked with new flavors that the scientists have innovated, from black truffle and pumpkin spice to wasabi and soy sauce.

Almonds have proved enduringly popular in America. They are heart healthy, full of omega-threes, and promote skin health. At the moment, they represent California’s third most valued commodity, worth $5.6 billion.

But they also have proved problematic, especially in the wake of California’s recent drought and in an age of increasingly extreme weather, according to Michelle Sneed, a hydrologist at the United States Geological Survey.

The state’s crop already is embroiled in a struggle over water rights. And no matter how innovative and efficient almond growers become, they eventually must face the reality of California’s climate, scientists say. There isn’t enough water, and there are too many almonds.