Cookbook clubs: An idea whose time has come

I just now learned about a fad (or potential fad) that was popular (or potentially popular) five years ago. And although I may be half a decade behind the times, I think it is a brilliant idea.

Cookbook clubs: An idea whose time has come

I’ve never claimed to be fashionable. Fads pass me by without my even noticing.

Which is why I just now learned about a fad (or potential fad) that was popular (or potentially popular) five years ago. And although I may be half a decade behind the times, I think it is a brilliant idea.

Have you heard of cookbook clubs? I hadn’t. Perhaps you’re even in one, in which case: Why didn’t you tell me about this before?

The idea behind cookbook clubs is simple, but within simplicity there lies perfection. A group of friends, or strangers who will soon become friends, gets together every couple of months to cook a meal out of the same cookbook. 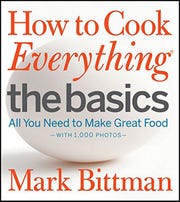 "How to Cook Everything: the basics" by Mark Bittman. (Photo: Amazon.com, TNS)

The advantages to such a club are clear: Everyone gets to partake of a feast, while only preparing one dish; they can learn about a certain type of cooking or discover a new favorite cookbook author; and it strengthens friendships in a jovial setting.

The disadvantages are few: Along with the fun part (the cooking and eating), there are bookkeeping duties — someone has to pick the cookbook of the month, and the members have to choose among themselves which kind of dishes each one is going to make.

One person will have to serve as the leader, at least for each meeting, and there will have to be some sort of spreadsheet to keep track of dietary restrictions, diets and dislikes. A lot of people hate cilantro, some abhor shrimp, others are avoiding gluten or carbohydrates.

The key, apparently, is to form a club with like-minded folks. Obviously, everyone in the group will like to cook (it would soon become apparent if someone joins just to eat other people’s food). They will want to try new things and will be intrigued by the opportunity to go in depth into a food-related subject.

The biggest obstacle, as I see it, is making sure everyone is on the same page about the food they like to cook and eat. The article by Tara Austen Weaver that belatedly introduced me to the concept focused on a cookbook club that clearly was meant for people who describe themselves as “foodies.” They cooked such delicacies as Burmese Tea Leaf Salad, saffron-tinted cauliflower, caramelized garlic tart.

Admittedly, that all kind of appeals to me. But cookbook clubs don’t have to be so froufrou.

It all depends on the cookbooks you choose. Beginning cooks would get the most out of the basics: “Joy of Cooking,” Mark Bittman’s “How to Cook Everything,” Better Homes & Gardens/Betty Crocker/Fannie Farmer. Cooks who are more comfortable in front of a stove and want to challenge themselves could concentrate on the next step: Julia Child, say, and Marcella Hazan.

For the most advanced cooks with money to burn on expensive ingredients, there is always “Nobu: The Cookbook.” It all depends on your ability and interests.

It is this self-selection of cookbooks that I see as the biggest draw to cookbook clubs. It isn’t the food that you eat, necessarily, or the opportunity to enjoy a comfortable party.

What I find most appealing is having a good meal with people who are similar to you. If you like the same kinds of food and have the same experience in cooking, you’re probably going to like one another.

The conversations must be wonderful.