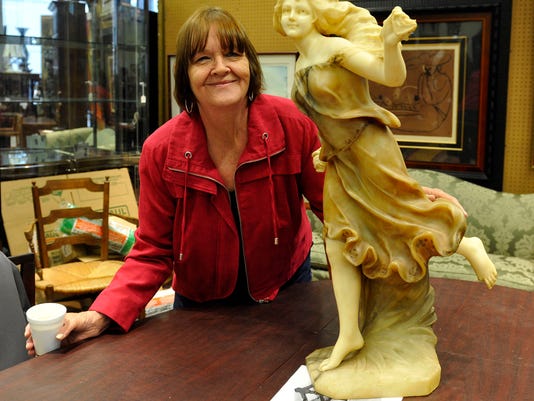 While many of our homes are filled with holiday decorations at this time of year, large busts and works of sculpture were common sights in upscale homes at the turn of the century, where they were often displayed in formal parlors that received guests. Linda Roach recently brought in a piece of sculpture that her children inherited from their grandparents to an appraisal session at DuMouchelles Art Gallery and Auction House downtown.

“The attached photos are of a marble and alabaster statue brought to America in the early 1900s as a dowry for my children’s great grandmother,” Roach explained in an email. “It stands 31 inches high and has a circumference of approximately 35 inches. Some time ago, I contacted the Detroit Institute of Arts about tracing the history of this type of statue.” While the DIA gave her more information about the type of sculpture and the workshop it was possibly made by, they never gave her an idea of its value, something she was hoping to determine from a Trash or Treasure appraisal.

Unfortunately, the lack of a signature anywhere on the piece made it difficult to determine who exactly had made the piece, says appraiser Jerry Anderson, who took a closer look. “Unsigned sculptures from Italy are very common,” he told her. “In fact, we had one sell this past May for $1,700 that was very similar to this one and the same height,” he told her, sharing a photograph of the piece with her. Like Roach’s piece, the figure was made of Italian carved marble and was well executed. Unlike Roach’s piece, it had been drilled at some point, possibly for use as a lamp.

Because it was made of both marble and alabaster, Roach’s piece is officially known as “mixed media,” the appraiser pointed out. “The combination of the two colorations is especially nice,” he told her. He also told her that the piece is “really nicely done,” and an example of the good quality works that came out of the region in the late 1800s and early 1900s.

He also praised its overall condition, pointing out a small chip in the toe that he said wasn’t a major deterrent if she were to sell it. “I haven’t really cleaned her,” Roach told the appraiser, who said she’d made the right decision. “It’s better to be careful,” he told her. “Many antiques have been devalued by over-cleaning. It’s always better to trust a professional.” He recommended Ken Katz and Conservation and Museum Services in downtown Detroit if she were interested in cleaning or conservation work.

Because the piece they recently sold at auction was estimated at $1,500 to $2,000 and sold for $1,700, the appraiser felt confident putting a similar value on her piece. Despite its strong value, Roach was not interested in parting with the family heirloom. “We will keep it,” she told him. “It’s a family piece and it will stay in the family.”

Do you have an object you would like to know more about? Send a photo and description that includes how you acquired the object to: The Detroit News, Trash or Treasure?, 160 W. Fort St., Detroit, MI 48226. Include your name and daytime telephone number. You may also send your photo and description to trashortreas@aol.com. If chosen, you’ll need to bring the items to an appraisal session. Photos cannot be returned.