A look at couple's journey on 'American Rehab: Detroit'

Life on TV is often neat and tidy. Real life — especially when it comes to major house renovations — is anything but. 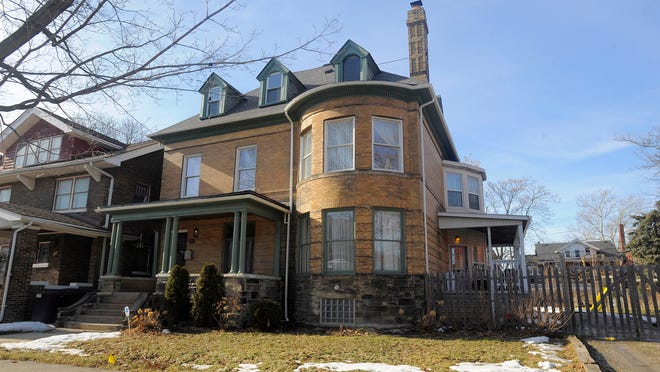 Take "American Rehab: Detroit." The final credits have rolled on this very fun series on cable's DIY Network which followed young Detroiters Christopher Lee and Amy Feigley-Lee and their baby, Ruby, as they renovated nearly every room of the 1903 Victorian Lee's great-grandparents once owned just north of the Boston-Edison neighborhood.

The show concluded with a party with relatives flying in from all over the country to see the 3,500-square-foot house many had only heard about in family folklore.

On TV, the project looked fairly orderly and seamless with a few hiccups along the way. In reality, multiple rooms were renovated simultaneously. There were clothing changes — from work clothes to nicer clothes for "final interviews" for each room — and a contractor and crew were at the house nearly around the clock to get the house finished. The production company also helped pay for the renovations so they could be finished in a certain time frame.

Still, watching the show as it aired, Feigley-Lee says she and Chris — who had cable installed the day before the show premiered — really enjoyed it and have gotten a lot of great feedback on the show.

"As a TV show, it turned out really well," says Feigley-Lee. "Of course, there's an element of fiction there. It skims over a lot of the detail."

One big omitted detail: The couple had actually been working on the house for years on their own before production company Magnetic Productions approached them about the show.

What the show did do, though, was help the young family finish the process — including overhauling the completely dilapidated garage, major renovations to three bathrooms, along with renovating a guest room. And the kitchen got another beautiful makeover. A contractor and his crew also were on site nearly seven days a week.

"This wouldn't have been done" without help, says Feigley-Lee.

With the show now over, Feigley-Lee says she and Chris are happy to have such a unique historical record to one day show their daughter.

"We are thrilled to have a record of a very important time in our lives," says Feigley-Lee.

And Metro Detroiters seemed thrilled to watch to transformation unfold on TV (reruns continue to air on DIY; check their website for listings). Comments filled the couple's social media site as the show progressed.

Lee first heard about his great-grandfather's house through family folklore. Once owned by Daniel and Patrice Foley, the house was lost during the Great Depression.

In college, Lee tracked the house down through an uncle. When it wound up an auction block after sitting vacant for five years, Lee decided to take the plunge and buy the house for $8,100 in 2007.

The house was in very rough shape. Pipes had been stripped. Light fixtures were missing. There was extensive water damage. The first summer the couple lived in the house, there was no hot water.

"When we moved in, it was still extremely rough. We had one half-functioning bathroom," remembers Lee.

Slowly, he and Feigley-Lee — who have wedding photos shot inside the house in its unrenovated state — began working on it room by room, updating the electrical and plumbing, taming the tundra-like backyard, renovating the kitchen, and creating a nursery for Ruby.

When Magnetic Productions came along, the couple viewed it as a chance to fast-forward renovations and get them finished once and for all.

The couple filmed from fall of 2013 through early January, often filming three to five days a week. The kitchen was renovated not once, but twice — first by Lee and Feigley-Lee, then again during the show. Covered in one 30-mintue episode, the reality is "it probably took a couple months," says Feigley-Lee.

Some of the most fun parts of the house actually weren't highlighted on the show. Ruby's nursery is bright and whimsical. Original, unique photos — some by Lee, others by some of Lee and Feigley-Lee's Cranbrook Academy of Art colleagues — are displayed throughout the house. And in the dining room are two ornate detailed Chinese armoires from Lee's father, who is Chinese.

Looking back on the experience, Feigley-Lee is both grateful for it — and grateful some parts are over. Worried about lead paint and its removal, the family actually moved out of the house during the main demolition work, including removing a wall in the kitchen. Once everything was scrubbed down and scraped, the couple moved back in, but were basically confined to their bedroom and sealed off from the rest of the house.

"It was hard. She (Ruby) was really little. We had an induction hot plate and a microwave and all of our food because we didn't have a kitchen," says Feigley-Lee.

Feigley-Lee says some viewers have been critical online that the house wasn't "a true renovation." But the couple stands by their approach.

"The choices that we made worked best for our lifestyles, and conformed (to) the tight time and budget constraints of filming a TV show," says Feigley-Lee. "We are just happy to have had the opportunity to be a part of one of the many positive things happening in the city."

Behind the scenes of "American Rehab: Detroit"

■Some room color choices were a collaborative effort. The couple worked with interior designer Ellen Premtaj of Elle Interiors of Allen Park to hone their design and help with some style choices. And while they were unsure of some color selections — including the dark red palette of the downstairs bathroom — they were encouraged to go brighter in some rooms.

■ The timeline was condensed. Lee had actually bought the house at a tax foreclosure auction in 2007 and had been working on it for five years — updating the electrical system and plumbing, updating the kitchen — before the show came along.

■ Lee looked like an old pro finishing project after project on the show — from installing legs on an old antique bathtub in his daughter's bathroom to renovating the front porch — but the reality is he'd never done a home renovation project before. His great-grandfather's house was his first. "My mom said, 'Are you sure you don't want to start with a bungalow?'" remembers Lee.

■ What is Straits Garage? In several episodes, Lee wears a T-shirt for Straits Garage, located on Jos. Campau in Detroit. Chris opened the garage just after filming finished in January 2014.

■ Without a contractor or the show, some parts of the house, including the garage, likely couldn't have been saved. The garage was completely rebuilt.

■ Renovations on several rooms were happening simultaneously. "The logistics just blow my mind," says Feigley-Lee. "We had all these wardrobe changes because we were wearing grubby clothes and we were filming several scenes a day."