Ford estate makeover to bring 1915 back to life 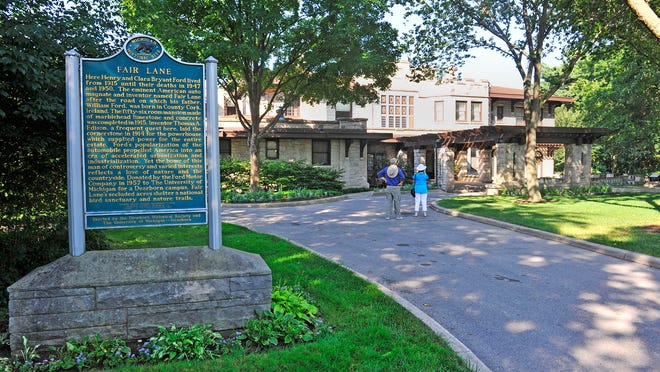 On a bright, sunny July day, light shines through the windows of the sun porch at the Henry Ford Estate at Fair Lane in Dearborn, the same porch where Ford Motor Co. founder Henry Ford and his wife, Clara, would often watch birds and nature along the Rouge River a century ago.

It was a favorite spot for Henry and Clara, who spent more than 30 years living in their unique country retreat.

Today, the porch — and much of Fair Lane — looks little like it did when the Fords moved in 100 years ago. Two 1980s floral sofas flank one wall. Nearby, beautiful oak woodwork in several rooms is now off-white, painted over in 1941. Carpet covered much of the original wood floors until six months ago.

But the nonprofit that now oversees the Henry Ford Estate is working to turn back the clock for this iconic estate. They’ve launched an ambitious $35-million campaign to not only restore the estate, but also re-create it as it would have looked around 1915.

And as they celebrate the estate’s centennial with the Fair Lane Folk Festival on Saturday — an appropriate tribute to Henry and Clara who loved folk music and dancing — organizers say they want to create a home where people will not only gain a better understanding of one of Metro Detroit’s, and America’s, most famous families, but also interact with their environment. The first floor of the estate — closed to tours since 2010 — will be open to VIP ticket holders Saturday.

“It’s very sterile when you walk through the house now,” said Mark Heppner, vice president of historic resources at the Historic Ford Estates. “And that’s all people have known for 50 years. When people think of Fair Lane they say, ‘I’ve been there.’ But people won’t imagine the transformation that’s going to take place. It’s night and day.”

It’s a massive undertaking. The fundraising campaign is underway — $12 million has been raised — to pay for structural and interior renovations, some of them long overdue. The estate’s management also is putting together a team of artisans, conservators and furniture makers to determine what the estate originally looked like and re-create the furnishings.

To do that has required some significant detective work — sifting through the Ford family’s archives and studying old photos, invoices and letters to determine everything from the make of certain furniture to the color of original rugs. Conservators, meanwhile, are taking paint and floor samples to reveal what may be under years of paint or stain.

“What our goal is with this research is to really understand the home that Henry and Clara Ford built,” said Kathleen Mullins, president of both the Henry Ford Estate and Edsel and Eleanor Ford House in Grosse Pointe Shores. “And then to take it back so if they were to walk in the door, they’d say ‘We’re home.’ ”

The 31,770-square-foot estate has 56 rooms and sits on 17 acres designed by famed architect Jen Jensen. The estate, designated a National Historic Landmark in 1966, is named after the birthplace of Henry’s grandfather in County Cork, Ireland. It has an unusual style, a mix of prairie and English castle with a limestone exterior.

It was designed by Marion Mahoney Griffin of the Chicago firm Von Holst and Fyfe, but sometime during construction Griffin was dismissed and the Fords hired William Van Tine, originally an interior designer from Pittsburgh, to finish the job.

Van Tine wasn’t a known architect, Heppner said, and family letters show a detective agency was even hired to look into his background, which found he had trouble paying bills. The Fords hired him anyway.

Mullins said the house wasn’t built to be a showplace: “By this time, he (Henry) had global recognition, but they were always really humble people. They built a house that was for their family.”

The house reflects the Victorian aesthetic Henry and Clara grew up with, Heppner said. An elaborate hand-carved wood staircase railing makes a bold statement in the main hall. There are Victorian sconces intertwined with velvet and marble fireplaces.

Moving to Dearborn from Detroit — where they’d lived briefly in Boston-Edison and other houses — was a homecoming for the couple, Mullins said.

“This was coming home for them because they were both born and raised in Dearborn,” Mullins said. “They were always very close to their family. Clara would get in her boat and go up the river to see family.”

After Clara’s death in 1950, Ford Motor Co. took over the estate, using it as a corporate archives and retreat. It was later donated to the University of Michigan to establish its Dearborn campus in 1956. In 2013, a nonprofit was created to oversee the Ford Estate with the same management team as the Edsel and Eleanor Ford House. Each estate has its own board and finances.

But unlike the Edsel and Eleanor Ford House — still furnished with most of its original furnishings and supported by an endowment Eleanor established — the Henry Ford Estate is a different story. Most of the original furniture was sold at auction in the 1950s, other than a few items the family kept.

“All four of the grandchildren were married by the time Clara died, so most of it went to auction,” Mullins said.

What the estate does have is ample photographs and invoices showing what was there.

Heppner said the period of focus for interior restorations is circa 1919 and will focus on several key rooms: the living room, dining room, billiards room, music room, the upstairs master bedroom (where Henry died) and the downstairs field room. The time line of the house to reopen for tours is still being determined.

The first room that will get a full makeover — and will serve as a pilot of sorts — is the sun porch. Located at the rear of the house, it’s covered in limestone. A full wall of windows overlooks the Rouge River. Only one photo exists really showing the room fully decorated in 1919.

But it’s seen years of wear and tear. The ceiling has extensive water damage. Later this summer, crews will restore the windows, clean the stone, and re-create original wicker furniture, planters and radiator covers. It should be finished by next summer.

“This kind of room was so important to homes like this. It’s centrally located, it’s facing the Rouge River,” Heppner said. “There’s this connection to the outdoors ... We know Henry and Clara spent a lot of time in this space — watching birds, looking at nature.”

Heppner and Mullins want visitors to really interact with the house, not just view rooms from afar.

“When you’re in a house with a velvet rope, there’s not a way to understand that room,” Mullins said. “... Historic houses tell you what your memories should be. Instead, this will be an opportunity for you to create your own relationship, your own experience. It’s a very different approach.”

■Music on the Meadow: The Dearborn Symphony Orchestra will play on Sept. 20 from the estate’s music room terrace. Attendees also will get to hear some works performed on instruments collected by Henry Ford. Ticket details to come.