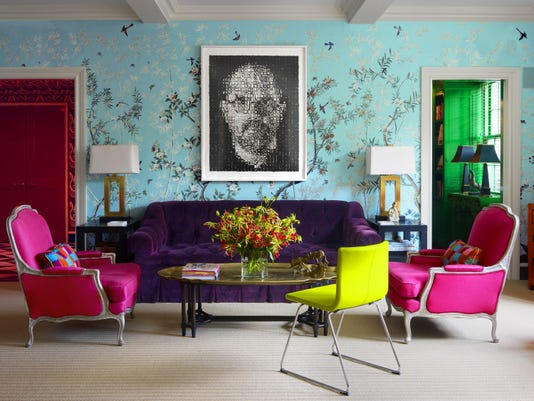 Jewel tones – deep purples, pinks and greens – are in in 2016.(Photo: House Beautiful)

And so it begins.

When it comes to counters, quartz will continue to be big. Pictured is Cambria Quartz at the Extraordinary Works showroom at the Michigan Design Center. Todd McInturf/The Detroit News
Fullscreen

Some streamlined kitchens are growing in popularity, such as this white inset-style kitchen at Extraordinary Works. The Detroit News
Fullscreen

Lucite furniture and accent pieces are on trend in 2016. Here, a Lucite Bel Air vase and a mini scoop candleholder were seen at the Jonathan Adler store in Los Angeles, Calif. MCT
Fullscreen

Jewel tones -- such as deep purples, pinks and greens -- are a trend in the new year. House Beautiful Pink
Fullscreen 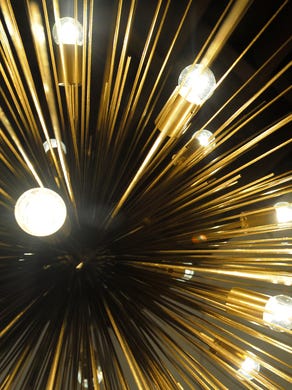 A funky light fixture adds texture to any space. Pictured is a custom chandelier created by Loren Weiner, owner of Mod Mart in Clawson. The Detroit News
Fullscreen

Geomoetric shapes will continue to be popular, but will expand into tiles and shelving. Wayfair's Donnia Zig Zag Bookcase has an espresso finish. Wayfair
Fullscreen

Think sleek styling in kitchens in 2016. This is an island countertop with integrated dishwasher by Extraordinary Works. The Detroit News
Fullscreen

Clean, streamlined looks are on trend in the kitchen. This is European-style Mouser-brand cabinetry with different finishes, including foils, aluminum-framed glass doors and natural walnut and stainless steel pulls at Extraordinary Works. The Detroit News
Fullscreen

For the first time ever, Pantone named two Colors of the Year -- Rose Quartz, a light pink hue, and Serenity, a blue tone. IKEA
Fullscreen

Indoor gardening -- another trend in 2016 -- is all about bringing a touch of green inside. Target
Fullscreen

Mixed metals such as warm golds, copper, and brass will be in big in 2016. The Nate Berkus Square Accent Gold Side Table has a marble top. Target
Fullscreen

The Bohemian look is all about contrasting colors and patterns. "The New Bohemians"
Fullscreen

Stikwood, a type of stick and seal wood, adds texture to a wall. Stikwood
Fullscreen

Bar carts will continue to be big in 2016. Target
Fullscreen

For Detroit, it’s been a decade of renewal and rebirth. As the city continues to find its footing after emerging from bankruptcy, one word could probably sum up its mantra for the new year: momentum.

New restaurants and stores continue to open their doors, especially in Midtown and downtown, and that should continue in the year ahead.

Meanwhile, Detroit continues to develop its reputation as a mecca for artists and designers from all over the world. Earlier this month, UNESCO, an arm of the United Nations, named Detroit as a city of design in its Creative Cities Network.

Across the nation, Detroit isn’t the only place feeling a renewed sense of hopefulness. Nationally, as the economy continues to grow stronger, that’s rubbing off in home decor.

Sherwin-Williams and Benjamin Moore both chose white hues – Alabaster and Simply White, respectively – as their Colors of the Year for 2016.

“Alabaster represents a straightforward and necessary shift to mindfulness, well-being and an atmosphere that is pure,” says Jackie Jordan, Sherwin-Williams’ director of color marketing.

Some may question whether white is actually a color, but Susan Todebush, general manager of the Michigan Design Center in Troy, loves the white hues.

“It’s a warmer white,” she says. “It’s a different looking white then that cold, sterile white.”

Elsewhere at home, texture will continue to be big in the new year – textured walls and carpeting; funky light fixtures; and cool accents such as wood sculptures, minerals and metal.

“It’s all about the texture,” says Todebush. “That’s the biggest thing.”

And technology is changing how we create texture at home. At Cercan Tile at the design center, owner Elizabeth Uberti says porcelain tile that looks like faux wood or marble is growing in popularity and it’s more durable and easier to maintain. Meanwhile, the tiles are getting bigger. At a recent show in Italy, tiles were 4 feet by 4 feet.

“Everything is bigger,” Uberti says.

Tiles may be getting bigger, but our homes are getting smaller – along with our furniture. The tiny house trend isn’t going away any time soon. If anything, it’s likely to get bigger as more baby boomers retire and downsize. And smart home technology will continue to evolve in 2016, allowing us to control everything from our thermostat to our garage door with a tap of our phone.

“People are really wanting to bring their personality into a room,” says Faith Phillips, vice president of retail store experience for Monroe-based La-Z-Boy.

Let’s hope the momentum of 2015 continues in 2016 – with housing, economic activity and job growth. And as we prepare to elect a new president this year, can we add civility to the list? We can at least hope, right?

Alabaster, Sherwin-Williams’ Color of the Year

“Rogue One: A Star Wars Story”

Monochromatic decor with one pop of color

Marsala, Pantone’s 2015 Color of the Year

Working from a laptop in bed

Hover crafts from “Back to the Future”