These two have ‘Detroit Hustle’ down 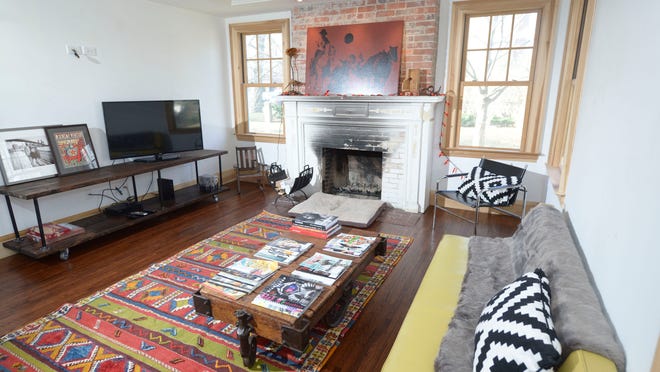 A large white cat with a bulging belly traipses along the floor in Amy Haimerl and Karl Kaebnick’s kitchen before he finds a pocket of sunshine in the couple’s music room and splays out.

For a cat that used to live outdoors, Jack is surprisingly at home inside Amy and Karl’s Detroit home these days. That’s fitting because Jack played a key role in the Brooklyn couple’s decision to take a huge leap of faith and buy an abandoned house on the city’s east side and restore it.

The way Amy tells it, staring at their future home in Detroit’s West Village, she and Karl weren’t sure if they should take such a big gamble — buying a 1914 home with no heating, plumbing or electricity in a nearly bankrupt city. They needed a sign.

They found one: Jack. A white cat scampered across the house’s roof.

“We’re pretty sure that was him,” says Amy, who has written a book about the couple’s experience rehabbing their house called “Detroit Hustle: A Memoir of Life, Love & Home” (Running Press, $24), which comes out in May. “It was a giant white tomcat on the roof. We’ve never seen any other giant white tomcat, but maybe that’s because Jack chases them off. This was our sign.”

You can’t blame Amy, an adjunct journalism professor at Michigan State University and freelance writer originally from Colorado, and Karl, a computer programmer who grew up in Tennessee, for looking for signs.

After living in New York for 13 years, the couple actually came to Ann Arbor in the fall of 2012 for a journalism fellowship. But long before then, they daydreamed about Detroit.

“It was the one place that really interested both of us — sort of the idea of it,” says Amy, who admits cheap real estate also was a factor.

After Hurricane Sandy hit their beloved Red Hook neighborhood in Brooklyn, their daydream came into focus.

Still, “Detroit Hustle” makes it clear that rehabbing a house in Detroit is no easy task, from simply finding one to getting a mortgage. The couple had to cash out a 401(k) to renovate the three bedroom, three and a half bath house and later ask family for loans, which they repaid once they got what’s called a cash-out refinancing from Talmer Bank when renovations were nearly complete and the house appraised at a certain value.

Amy, who kept a blog of their renovation experience before deciding to write a book, says the title isn’t negative or about scamming anyone. It’s personal.

“I grew up with my dad telling me hustle. ‘Hustle kid. You always gotta hustle.’ So it’s kind of funny to come here and you hear ‘Detroit hustles harder.’ It’s part of the culture. It just meant something to me, hearing that line from my dad, now here in Detroit. Detroit just does what it has to do and doesn’t always care what other people are doing or thinking about. And it felt very similar to how I was brought up.”

The hustle, or hard work, meanwhile has paid off. The 3,000-square-foot Georgian Revival that once had no utilities and all 42 of its windows boarded up is now an inviting, light-filled home that flows from room to room. Amy and Karl give much of the credit to their contractor, father-and-son duo Calvin and Christian Garfield of Detroit-based Maxwell Construction.

“We lived in the house for a year and a half (during renovations) and we still love them,” says Amy.

Amy says some may cringe at how much they spent on the house and renovations — about $400,000 — but she says it’s a fair price for the services provided.

“Fundamentally, most of the expense ... plumbing, heating, electrical, was rebuilding the structure,” says Amy. “The trim is our one luxury.”

And the trim certainly stands out. Taken from the First Unitarian Church of Detroit before it was scheduled to be demolished (it burned before demolition could happen), the wainscoting has been meticulously restored and now lines the walls. Almost all of the couple’s interior doors also are from the church.

But the focal point of the 1914 house — which Amy and Karl named “Matilda” after a Tom Waits song, “Waltzing Matilda” — is the kitchen. Once a labyrinth of small rooms, four walls were torn down to open up the space and create the current footprint. It flows right into the open-concept dining area and then Karl’s music room.

The couple struggled to visualize the kitchen on their own, so they turned to Jerusha Kaffine at Kurtis Kitchen & Bath to develop the floor plan. An 8-foot-long baker’s table from a salvage shop is now the kitchen island.

“The kitchen was the one part of the house that we really had to design early on,” says Karl. “And we ended up throwing up our hands and saying, ‘Well, it’s not going to really be the kitchen we want, but we just have to make do with it,’ which was really frustrating, because we both cook. But at some point, we realized we really like this kitchen after all.”

The music room just off the kitchen in what was once a sun porch, meanwhile, almost didn’t make it. Original architectural plans drawn up by the couple who previously owned the house before Amy and Karl bought it called for removing it.

“It was peeling off the side of the house and there was water running through,” Amy says.

But Cal and Christian Garfield found a way to rebuild it. Now natural light floods into the space from several windows.

And in a house that was once abandoned, personal mementos are now sprinkled throughout the decor. On the top shelf of a built-in bookcase just off the foyer is a photo of Nona Herzog, who owned the house with her husband, Arthur, for nearly 40 years. Next to it is a painting of the old downtown Hudson’s that Herzog gave to a neighbor, who in turn gave it back to Amy and Karl.

“It’s really special,” says Amy. “I cried when they gave it me, just feeling this continuity in this house, in this neighborhood and being a part of this greater place.”

A book launch party will be held at 4 p.m. May 7 at the Detroit Institute of Arts’ Kresge Court, the same place author Amy Haimerl spent much of her time writing the book. The party runs from 4-6 p.m.; a reading will begin at 5 p.m. The event is free and open to the public. Go to facebook.com/events/932521593511244/. Haimerl also is going on an eight-city book tour.