Lisa Waud doesn’t do small. The word may not even be in her vocabulary. 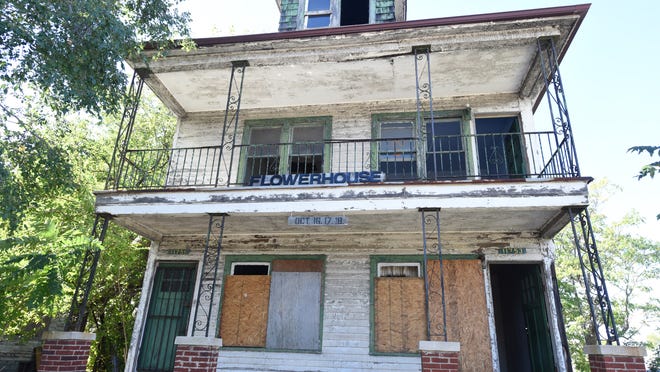 Nearly one year ago, Waud, a Detroit-based floral designer and owner of pot + box, assembled a team of designers from across the country to transform an abandoned duplex on the I-75 service drive into a large-scale floral installation. Flower House attracted more than 3,400 visitors and media from across the world.

But in the hubbub of coordinating such a big display, Waud says there wasn’t a lot of time to really interact with all the other designers. So for the one-year anniversary — which is in mid-October — “I thought we’d get together for a party or reunion,” she says. “But I don’t really do things small.”

Now, what started as a reunion has grown into Detroit Flower Week, a weeklong symposium with presentations, workshops and installations by floral designers and artists from all over the country, including renowned British botanical artist Joseph Massie. It runs from Oct. 11-15 (see box for details).

The week will culminate with a five-course dinner at the Detroit Public Library’s gorgeous Adam Strohm Hall. The dinner, which will celebrate sustainable flowers and food, will take place under a floral installation by Massie.

“I wanted to bring everyone together again to lay the groundwork for more connections and collaboration,” Waud says.

And the week isn’t just meant for floral designers or artists, says Waud, who is hoping to draw 200 people a day.

“There’s something in it for everyone,” she says. “... It isn’t just for designers.”

Waud believes that “something for everyone” approach is one reason why Flower House had — and continues to have — such an impact on people.

Today, Waud says her life has changed dramatically since last year. She’s traveled all over the country to give presentations about Flower House. Next week, Waud will be one of the featured speakers at Thursday’s TEDx Detroit, a technology, entertainment and design symposium at the Fox Theatre.

And in 2018, she’s already been asked to do a floral installation at the Frederik Meijer Gardens in Grand Rapids, involving some type of rustic barn. “We haven’t flushed out the design yet,” she says.

Waud says she often gets emails from people who want to create their own flower houses, asking for her help. And while she’s happy to encourage them, she doesn’t want to be “the plug-in Flower House lady.”

“I don’t want to get bored and I would never want to dip into any sort of exploitative installations of abandoned houses,” says Waud. “I don’t want to do the same thing again. I love large-scale projects and I love collaboration – but not a house.”

And that’s what Detroit Flower Week, which will have events at Detroit’s Jam Handy, along with the library, will be all about. Floral designers from California, New York and Oregon will be on hand, giving presentations and workshops on everything from creating edible flower arrangements to slow flowers.

And not everything will be about flowers. Emily Katz of Modern Macrame in Portland, Oregon, will lead two workshops on creating a macrame wall hanging and planter, one on Oct. 13 at the Jam Handy and another on Oct. 15 at the Detroit Public Library.

Katz learned macrame from her mom just four years ago and has since led workshops all over the world. She says the craft has evolved a lot since its 1970s heyday.

“It’s been fun to play around with new materials,” says Katz, a former fashion designer. “That’s an area where it’s really innovative. People aren’t just using hemp, which was the standard before. Now they’re using ropes, cords and doing it in a more modern way with a modern look.”

Locally, Detroit muralist Louise Chen — who goes by the name Ouizi — will lead a workshop Oct. 12 at the Jam Handy Loft. And Monique Herzig of Ferndale’s Alchemy, which offers everything from body care services to henna, will offer a henna workshop from 12-2 p.m. Oct. 13.

Massie, meanwhile, who has won floral competitions all over the world and recently created a display out of roses for Queen Elizabeth’s 90th birthday earlier this year, will create a massive floral installation (and one of the biggest of his career) at the library’s Adam Strohm Hall for the final dinner. The 3,000-square-foot display will take about five days to create and will include branches, berries and seeds, says Massie.

“It’s all going to be very natural, as if you were in the most breathtaking part of Michigan on a beautiful autumnal day,” says Massie.

Massie met Waud earlier this year when he did a lecture at the Detroit Institute of Arts. The two hit it off immediately and when Waud asked if he’d be interested in being a part of Detroit Flower Week, Massie loved the idea.

“Everything Lisa does has a fun, cool, community-based element to it,” he says. “I just thought it was a fantastic idea.”

And the week won’t shy away from sensitive topics either, such as the lack of diversity in the floral industry. Waud says not long after she and the Detroit Flower Week team launched their website, she got an email from a woman who was so excited about what was planned until she realized she saw all white faces. Not one presenter was someone of color.

The conversation was an eye-opener for Waud. “I think of myself as very inviting, but I did realize that you have to actually work at it,” she says.

Flower House, the actual house, meanwhile, is no more. In late August, crews from Reclaim Detroit began deconstructing the house and its fixtures. The lumber will be re-used by artisans and designers for other projects.

The site will be converted into a flower farm, hopefully with plantings this spring. And what will it be called? Flower House Farm, naturally.

“It’s both closure and a new beginning at once,” says Waud.

Official Flower House photographer Heather Saunders has created a book all about last year’s Flower House. There will be a book launch party from 8-11 p.m. Oct. 11 at the Jam Handy Workshop Space, 2900 E. Grand Boulevard. “Flower House Detroit” captures images and experiences from the three-day installation. Saunders says the Flower House team received countless inquiries about a possible book during the installation so “it became very clear that the images and thoughts of those involved should really be told. So a book was the perfect choice,” Saunders says. The foreword is by Flower House creator Lisa Waud. The pre-sale price is $55 or $70 at stores. The book hits shelves in late October. Go to flowerhousebook.com.

■Workshops will include a session on European floral design, macrame, henna and more. The week will culminate with a Detroit Flower Week dinner from 8-11 p.m. Oct. 15 at the library’s Adam Strohm Hall. The five-course meal, “Floral Renaissance: A Revived Interest in the Classics,” will be put on by five up-and-coming local chefs. Massie will create a floral installation for the dinner.