Embraced by boomers, recliners get reboot

Aging generation wants comfort and style in their furnishings

Embraced by boomers, recliners get reboot 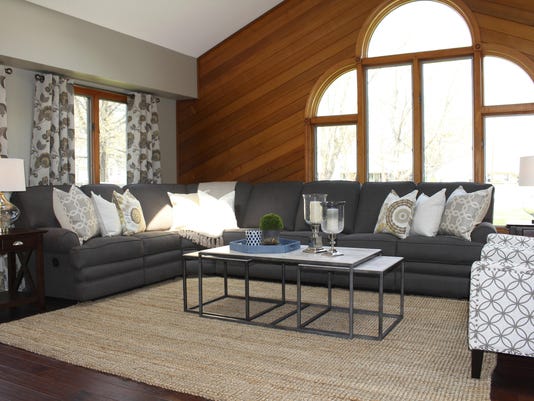 Interior designer Sarah Dooley helped this baby boomer client incorporate a sectional with reclining pieces into a room that combines comfort and style. As baby boomers age and downsize, they are demanding furniture that’s functional and comfortable.(Photo: AP)

But the easy chair has gotten a face-lift, thanks largely to baby boomers.

“Before, this furniture was strictly about the function — meaning it could recline, but there wasn’t much to the aesthetics of it,” says Lewis, whose firm specializes in design for older adults. “Because boomers want that cleaner-line look, it’s pushing the manufacturers to get on board.”

Recliners used to come in one profile: big and bulky, says Bruce Birnbach, president and CEO of American Leather in Dallas, Texas. “Either you wanted that look or you didn’t.”

Today, he and his competitors offer recliners “in every size and shape and style,” he says.

Like other manufacturers, La-Z-Boy, which introduced the recliner in 1928 and for years built a reputation more on comfort than on style, has added automation to the chairs, and offers models that are smaller and more stylish. But La-Z-Boy will never stop making the traditional chairs that made the company’s name synonymous with recliners, says Penny Eudy, product manager of upholstery for La-Z-Boy in Monroe.

“We want to a cast a wider net to attract that more stylish consumer and get them coming in, but we want to do it without alienating the customers that we’ve always had,” she says.

Eudy believes recliners are the ideal chair for the modern home: “We all are living more casually and more comfortably than we ever have,” she says.

The trend toward open living spaces means that customers are looking for furniture that’s less formal but still eye-catching, says Erin Berg, an associate editor at Furniture Today magazine in Greensboro, North Carolina. Open floor plans mean there’s nowhere to hide an ugly recliner, and no place for a formal chair that’s not comfortable, she says.

New recliners’ smaller footprint gives homeowners more flexibility, Berg says. Some manufacturers offer a “wall-hugger” feature: The seat moves forward when it reclines, allowing the chair to be placed against a wall.

Many reclining chairs, sofas and sectionals now plug in or run on battery packs, allowing them to do everything from charging your phone to cooling your drink, while providing an articulated head rest and lumbar support.

“Today’s recliners have become sleek and smooth-functioning, combining designer-quality looks with engineer-quality operations,” says Patricia Bowling, a spokeswoman for the American Home Furnishings Alliance, in High Point, North Carolina. “The baby boomers love their gadgets. They love being connected and they are doing that in every room of the house.”

Still, comfort remains a priority — particularly for an aging generation that’s active and has “a tendency to overdo it,” she says.

Berg says there are many more options now for how the chairs’ backs recline and the footrests extend.

Four out of every 10 recliners purchased in 2014 were for boomer households, according to a Furniture Today study released in 2015.

The variety of new fabrics and styles — including some recliners with legs — means that designers no longer shy away from the chairs, Lewis says. “Before, when a client wanted a recliner, you worried that it was going to ruin the whole look,” she says.

Lift chairs, which rise to help the occupant stand up, have also become more versatile and attractive, she says, moving from institutions into homes as homeowners look for ways to age in place.

“They’re not as slick as the plain recliner, but they’re getting there,” she says.

And as baby boomers downsize their homes, multifunctional furniture like the recliner becomes more important, says Sarah Dooley, principal designer at Leedy Interiors in Tinton Falls, New Jersey. “The family room becomes the key room in the house,” she says. “It’s got to be livable and stylish, but function is key.”