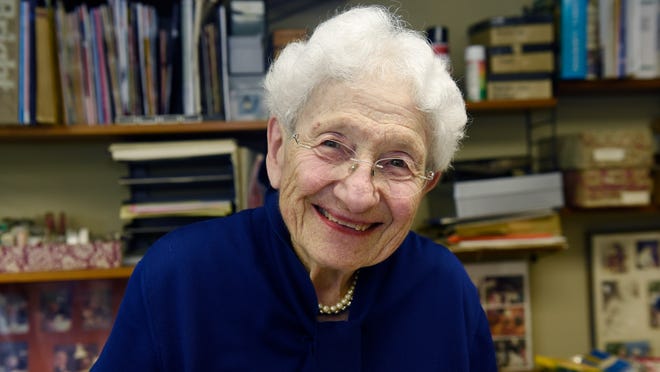 At 94 and still sharp as a tack, the iconic textile designer who played a significant role in bringing the mid-century modernist movement to Michigan is still busy working and creating new designs. Working out of her home studio in her Oakland County condominium, she’s designing upholstery fabrics and wall coverings for both Anzea Textiles and for Knoll Associates. She’s also getting ready for a one-woman show in Colorado.

“I just truly love my work,” she says. “I have no interest in retiring.”

Schnee made a name for herself, designing elegant, abstract forms — often drawn from nature. Through the decades, she has collaborated or been taught by some of the most iconic names in architecture and design including Buckminster Fuller, Minoru Yamasaki, Eero Saarinen, Charles and Ray Eames and Frank Lloyd Wright. She also helped guide the restoration of Orchestra Hall and The Whitney restaurant.

Her condo, meanwhile, is a wonderful reflection of the incredibly interesting life she shared with her late husband, Edward Schnee, and her remarkable career as a textile and interior designer. Her history is woven throughout the decor, from the Eero Saarinen Womb Chair in her living room to original bentwood and cane Prague Thonet chairs in her dining room that were purchased by her parents while honeymooning in Czechoslovakia in 1920.

Schnee grew up in Germany “where she was surrounded by artists including the important painter Paul Klee whose vividly colored canvases would prove influential to the development of her own aesthetic and the Adler home was filled with Biedermeier and early Thonet furniture,” says Sue Levytsky, editor of the book “Ruth Adler Schnee, 2015 Kresge Eminent Artist.”

“His studio was in his house,” Schnee said. “It was there that I first saw abstract design.”

And there were more early influences on Schnee’s design aesthetic.

“When I was 13 years old, my mother took me to a fine china shop in Dusseldorf, Germany, and told me to pick out china for my future trousseau,” she remembers. “I chose solid white china made by Artzberg. I still have it to this day and I still love it.”

In 1939, Schnee’s family was forced to flee from Germany to Detroit when Ruth was just 16 years old. After graduating from Cass Tech High School in 1942, she received a four-year scholarship to the prestigious Rhode Island School of Design and graduated with a degree in interior architecture. After working with renowned industrial designer Raymond Loewy in New York, she returned to the Detroit area to study architectural design with Eliel Saarinen while studying for her master’s of fine arts from the Cranbrook Academy of Art.

But finding a job in architecture was a challenge.

“Architecture offices didn’t hire you if you were a woman,” Schnee told The Detroit News in 2015. “That’s how I got started in textiles. I had to make a living.”

She made her first textiles after entering a design competition sponsored by the Chicago Tribune. Unable to find contemporary fabrics, she decided to create her own, using abstract shapes and bright colors.

“That led to my first professional project which was designing draperies for car showrooms in order to protect the lacquer on cars from the sun. Vertical blinds had not been invented yet,” she says.

Eventually, in 1948, she and Edward opened an influential interior design store, Adler-Schnee, in Detroit’s Harmonie Park. It introduced such brands as Marimekko, Dansk, Copco, Costa Boda, Orrefors and Artzberg to Detroit, before closing in 1979.

“Ruth ranks among the most important designers to emerge from Cranbrook’s already storied ranks of important designers and architects,” says Andrew Blauvelt, director of the Cranbrook Art Museum. “She was there with the Saarinens and the Eameses and others. ... Through interior commissions and textile designs, and her and her husband’s retail efforts to sell modern design to often indifferent Detroiters, lies a tenacity and unwavering belief in the principles and benefits of modernism.”

Greg Wittkopp, director of the Cranbrook Center for Collections and Research says, “Ruth Adler Schnee is one of my heroes. My dream is that when I enter my 90s I will have half her energy and half of her ability to continue contributing to the design world and to engage people around the world with meaningful work and ideals.”

Indeed, Schnee continues to design and create, doing most of it from her home studio. Her condo, purchased 23 years ago, is chock-full of furniture and objects, some iconic, others personally meaningful.

In the living room, her orange Womb Chair co-mingles with a Jens Risom settee that is upholstered with a fabric called “Bells” that Ruth designed. (Furniture designer Risom was responsible for introducing Danish Modern design to America.)

A bronze head of a man, sculpted by her mother, meanwhile, rests on top of a 100-year-old tri-colored glass table that was designed at the Weimar Bauhaus in Germany. (“My mother studied there. It was where modernism began,” she says.) And a marble table, designed by architect Minoru Yamasaki, sits nearby. And the handsome rectangular candleholder made out of pine that hangs above the fireplace was crafted by a Danish artist named Kjarholm.

Family artifacts, meanwhile, are woven throughout.

Her father’s extensive collection of pre-Columbian artifacts holds a prominent place in the first floor office. And in the living room several ceramic treasures by Harrison McIntosh and Lisa Larson dwell on a shelving unit alongside a few handsome pieces she made while studying ceramics at Cranbrook under the tutelage of renowned potter Majia Grotell.

And Schnee just keeps creating. She’s currently helping plan a one-woman show featuring her life’s work that will take place at the Sangre de Cristo Arts Center in Pueblo, Colorado, starting in October. And an art exhibit called “Serious Play” that will feature several important designers including Ruth will open in the fall of 2018 at the Milwaukee Art Museum and then move on to the Denver Museum in 2019.