When you’re photographing some of Michigan’s most amazing modern architectural gems, the littlest details matter – even a tree branch. 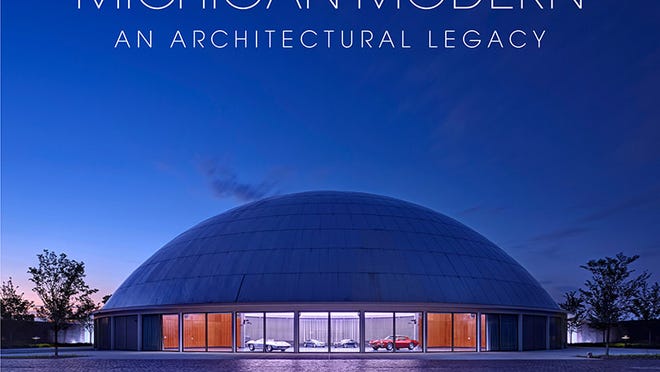 Michigan’s State Historic Preservation Officer Brian Conway and photographer Jim Haefner spent two summers capturing images for a book on some of the state’s most iconic modern homes, businesses and churches when a branch got in the way of a shot at one property.

The only solution? Cut the branch down.

“With the owner’s permission,” points out Haefner.

But that attention to detail pays off in Conway’s and Haefner’s new book, “Michigan Modern: An Architectural Legacy” (Visual Profile Books, $60). Published in February and celebrated with a book launch March 10 at Cranbrook, it profiles 34 examples of incredible modern architecture across the state, again making the case that Michigan was a “cradle for modernism,” writes Conway.

More than a third of the projects are located in southeast Michigan, designed by some of the biggest names in architecture including Eliel and Eero Saarinen, Frank Lloyd Wright and Alden B. Dow. More than half of the 34 projects, all built between 1929 and 2012, are homes.

Conway says while his first book, “Michigan Modern: Design That Shaped America,” was much broader in scope, focusing on furniture, design and much more, he wanted the second to focus “simply on architecture.”

For Haeffner’s part, the challenge was photographing landmarks readers have seen many times but “in a different way,” he said. He would sometimes spend several days at the same site if Mother Nature wasn’t cooperating or the lighting wasn’t just right. For some images, including an aerial shot at the General Motors Technical Center, he used drones.

“When you start to study these photographs, you see all these details,” Conway said. “He’s the master at capturing the light.”

The new book comes nearly a decade after Conway first began researching Michigan’s role in the modernism movement. At the time, buildings designed by well-known modern designers were being torn down because people weren’t aware of their historic value.

“We actually saw cases of buildings being scheduled for demolition and it was difficult to speak of them as historic,” said Conway whose modernism research got started thanks to a grant. “We decided we needed to have a better understanding of this period and also be able to portray that importance to the public.”

Still, narrowing down which projects to include in the newest book and which ones to weed out wasn’t easy, says Conway. He and Haefner started with a list of about 100 to potentially include.

“We wanted a geographical distribution throughout the state,” Conway. said. “And we wanted to show the progression of modern architecture.”

They also had to get permission to include certain buildings, which didn’t always happen. Alden B. Dow’s home and studio in Midland, for example, isn’t included in the book, though another house Dow designed is.

Below are three residential projects, all in Wayne County, featured in Conway’s and Haefner’s book.

Michigan has the third-highest concentration of homes designed by Frank Lloyd Wright in the country (Wright spent a significant portion of his career in Chicago) but only one, the Dorothy Turkel house, is in the city of Detroit.

Turkel, whose family made their fortune managing parking lots in the Detroit area, commissioned America’s famous architect in the mid-1950s to design her family a home. The house is an example of Wright’s Usonian Automatic design. It was built between 1956-57.

It “utilizes a technique of concrete block construction comprising specially made blocks dry-laid with horizontal and vertical reinforcement rods placed in channels and filled with concrete to bind the components together,” writes Conway in the book.

The L-shaped house features a two-story living room, or music room as Wright called it, which is overlooked by a second floor balcony.

“This house is an amazing house – inside and out,” said Haefner.

The W. Hawkins Ferry House (named after the original owner) was designed by Detroit architect William Kessler and built in 1964.

Ferry, an art collector, was the grandson of one of the founders of the Ferry-Morse Seed Company in Detroit, once the largest seed company in the world. An avid art collector, Ferry wanted a house “that would be the ultimate in modern architecture to showcase his art collection,” writes Conway.

The house, located in Grosse Pointe Shores right on Lake St. Clair, is designed “on a fifteen-by-fifteen grid, with each facade consisting of four bays,” writes Conway. The east facade faces the lake and is all glass set in metal frames.

“A band of windows where the exterior walls meet the roof makes the roof seem to float above the walls,” writes Conway.

Covering 78 acres, Lafayette Park was a collaboration between van der Rohe, developer Herbert Greenwald, urban planner Ludwig Hilberseimer and land architect Alfred Caldwell, writes Conway. It has eight residential developments, a school and a shopping center. At the center is a 13-acre park. All were built between 1956 and 1963, including the Mies townhouses and garden-court houses, the Pavilion Tower and the Lafayette Towers. Each tower is 22 stories high and has approximately 300 apartments.

As the city’s first urban renewal project, “Lafayette Park was intended to be development to discourage people from moving to the suburbs and was successful in creating an ethnically diverse community that continues to thrive today,” writes Conway.

(Visual Profile Books), by Brian Conway with photos by James Haefner, is available at local bookstores and online at www.visualprofilebooks.com.